The Chinese Closed Qualifier for the Asia Minor Championship - Berlin 2019 came to an end today with 5Power Gaming securing the final slot by taking down ViCi in the finals by a series score of ‘2-0’.

After Tyloo were able to see themselves through to the Asia Minors by beating ViCi in the Upper Bracket Finals, they dropped down to the Lower Bracket.

With this last chance to qualify for the minor ViCi Gaming were under quite a bit of pressure as they went up against 5Power, a team who they had previously defeated in the semifinals by a clean ‘2-0’ victory.

5Power since then had defeated 8EASY & BTRG to make their way up to ViCi Gaming. They seemed to be in great form, set to take revenge for the earlier defeat. 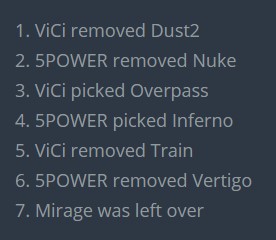 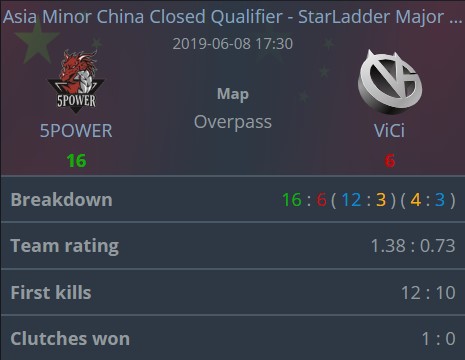 The two teams started out on Overpass, ViCi’s pick. It was a decent pick by ViCi, but it turned out to be a big disaster as 5Power started off by winning the first eleven rounds in a row putting ViCi under tremendous pressure. Going into the second half the match was already more than halfway into the pockets of 5Power and they did a good job of securing it quickly before ViCi could gain any kind of momentum.

The second map Inferno proved to be quite the challenge for ViCi once again. ViCi wanted to take it down to a decider by claiming victory on Inferno but this was easier said than done as 5Power kept pushing hard towards the victory. They started off a bit bleak playing T-sided in the first half but recovered in the later part of the match.

They turned tables on ViCi by holding down the sites really well. They shut down executions beautifully with an almost perfect read on the opposition.

With this, 5Power sweeps the last slot away from ViCi and qualify on to the Asia Minor Championship - Berlin 2019.

After 3 days of hard-fought games, we secured the final series by winning 2-0 over @VICI! GGWP!

Thank you to everyone who supported us and this is a short winning moment video to share with y'all! #5POWER #CSGO #ASIAMINOR #LETSGOBERLIN pic.twitter.com/NDBf0oLNl2

With 5Power qualifying for the Asia Minor, all the teams are set and ready to fight it out for a slot in the StarLadder Berlin Major 2019, taking place from 24th-27th July in Berlin.