Tanmay Singh aka Sc0utOP who was one of the key players in TeamIND has announced that he will be leaving the lineup post-PMSC 2019. After this, he will be playing with Team SouL who were one player short with MortaL having left to focus on his career as a streamer. 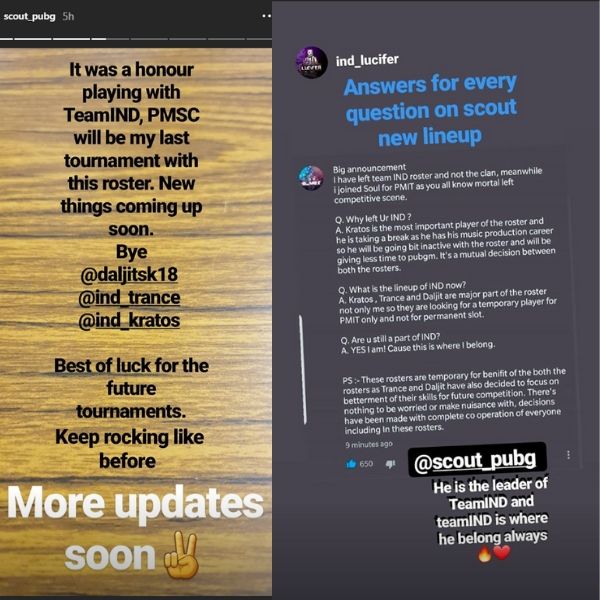 The news comes while both teams are in Taiwan for shooting content for PMSC 2019 and seems to be a mutual decision between both teams and parties. While Scout will be in SouL for the near future, playing in tournaments such as PMIT, TeamIND will also be looking for a temporary player for the tournament. Additionally, the players from TeamIND, Daljit and Trance will be looking to improve their skills and get better for the long run in this period. Their third player Kratos is looking to build a career in music production and he will also not be able to dedicate his full time and effort to the team. However the trio of Daljit, Trance and Kratos will stick together along with a 4th player for at least the PUBG Mobile India Tour or PMIT.

After PMSC 2019, the rosters for both teams will be as follows:

The roster move involves two of the biggest names in the Indian PUBGM circuit and is sure to have a long-lasting impact. Additionally, there seems to be a third Indian team, Orange Rock Esports (ex Indian Tigers) who are potential challengers to the title of the best Indian team.All 3 teams are likely to clash at PMIT, the qualifiers for which are currently underway.

Shounak has been one of AFK Gaming’s longest-serving esports journalists. From Dota, to Counter Strike and now Mobile Titles, you can rely on him to bring you the latest scoop and news from the world of esports.