ZOWIE eXTREMESLAND 2018 - A look towards the Middle East

One after the other as the Regional Qualifiers roll out, we shine a light on the shadowed Middle East Region to update you with the ongoing action in countries like Pakistan, UAE, Kuwait & Lebanon for ZOWIE  eXTREMESLAND 2018.

This is the first time in ZOWIE eXTREMESLAND that Pakistan is getting a qualifier spot under the Middle East Region.

The Pakistan qualifier is being hosted by Portal-Premium Gaming Experience along with IGen Gaming.

Online Qualifiers will witness the top 2 Teams making it through to the Offline Qualifier, where they will compete along with 8 Direct Invites, the winner will be moving on to the Regional LAN Finals in Dubai.

The 8 DI featuring in the Offline Qualifier are:

The dates for the Offline Qualifiers have been declared as 1st-2nd September, although strangely no dates have been confirmed for the registration or the start of the Online Qualifier.

The Lebanon Qualifier is hosted by eSports Lebanon along with eSports Lounge. The qualifier is part of the Middle East Region and will be seeing the winner of their Offline Qualifier compete in the Regional LAN Finals which will be held in Dubai.

The Offline Qualifier is scheduled to take place on 25th August at the eSports Lounge in Lebanon. The registration is free for all teams participating in the event which also features a Cash Prize of 1000$ to the qualifying team along with other goodies such as Fnatic signed mousepads & free hours to play at the eSports Lounge.

Click on the link provided to Register your team and for other helpful information:
https://www.esportslebanon.com/el18

The Kuwait Qualifier was announced on 1st August with the Offline Qualifier being held from 17th-18th  August. The event was hosted by Giants Gaming Lounge, which is also the venue at which the BO1, Single Elimination Qualifier took place.

'TOP5' won the Offline Qualifier today after going through some tough matches while showcasing great skill and promise, hope they continue with the same gusto on their path ahead.

They received a Cash Prize of $1000 along with a spot in the coming Regional LAN Finale, taking place in Dubai from 14th-15th September. 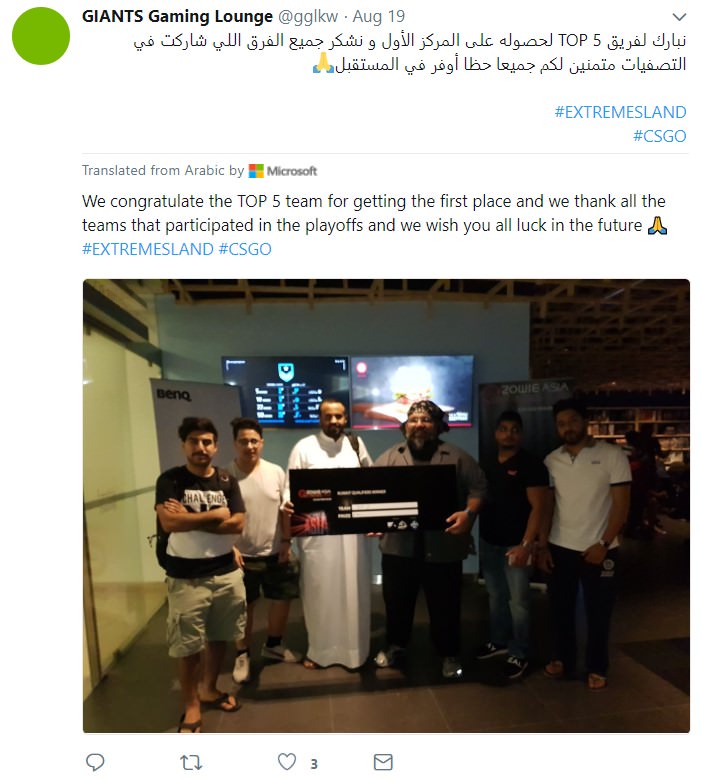 More information about the event can be found on the Giant Gaming Lounge’s Facebook Page or on their Website.

The UAE Qualifier is the biggest among all the Middle East Qualifiers as it is also home to the Regional LAN Finale. The event is being managed by Gamers Premiere Nation along with the logistical support provided from Elements Café.

The LAN Qualifier which was held from 17th-18th August took place at the Elements Café in Dubai and saw really fierce competition in the BO1, Single Elimination Qualifier. The top 2 Teams will be qualifying for the Regional LAN Finals which are to be held on 14th-15th September.

Team Shotcallers won the UAE Offline Qualifiers facing off against Fear The Reaper taking the series 2-0 and claiming their spot within the Regional LAN Finals. For more information Click Here.

That is all we could get our hands on from the Middle East Region for now. Stay tuned as we update you on the remaining few qualifiers in the days leading up to the ZOWIE eXTREMESLAND 2018 in Shanghai.