?Yakshas have their revenge; become the first side to beat the Marksmen

5th, Feb, 2018
Acrid’s Yakshas kicked off the 2nd half of the round robin stages with a bang, with a convincing performance against the Marksmen. Venom’s team may still be in the lead, but a single point separates his team from Acrid’s. It was also their first defeat of the season and as expected, teams are beginning to figure each other out past the halfway mark.

Jaunty continued his good form to pick up the win in Tekken, while Marksmen struck back to take the win in Real Cricket. Yakshas were still struggling in CS: GO with just a single win on the board, while their Dota squad has been pretty consistent. Let’s see how things turned out.

Skadoosh blows the Marksmen out of the server

The Yakshas IGL, Skadoosh may have had a quiet first half at U Cypher, but looks like he managed to kick things into high gear in the new phase. With a monster 37 frags in 30 rounds, Kapish and the boys edged out the Marksmen on cache. While the map pick may have seemed like Marksmen favoured, unfortunately, big names in the Marksmen lineup didn’t have the best of days. Rix especially had a hard time matching the fast pace of the Yakshas lineup.

It was clear however that both teams need to work on their CT side as neither looked convincing. However, the Yakshas took a solid 11-4 lead in their T side putting extra pressure on the Marksmen. This meant that a single reset would be enough for them to run away with the game. They would, in fact, achieve that in the 21st round as Impale found the A site completely empty, pushed through and got two very easy frags on the backstab with just a deagle. The round fell apart and eventually so did the game and the Marksmen ended up losing their second game in a row in Counter-Strike.

The Dota game, like most Dota games at U Cypher, went past the 50-minute mark but was more or less one-sided. The Yakshas were never really in too sticky of a situation and had Spectre as their late-game insurance. However, it was their Pugna being handled by Appa who got them into the late game with a good game. His Kaya + Aghs was more damage than the Marksmen were ready for and his Decrepify was really working a number on the right click heavy lineup. Mage’s Sven tried his level best to keep the Marksmen in the game but was powerless once his BKB was down to 5 seconds. There was too much riding on Red landing 3+ man RP’s and it just didn’t work out after a point for the Marksmen.

The Yakshas are quickly becoming a top contender and the one missing piece in their cog seems to have been found with the CS: GO squad finding their feet. The Marksmen will have to really dig deep to maintain their lead as the competition are beginning to catch up. 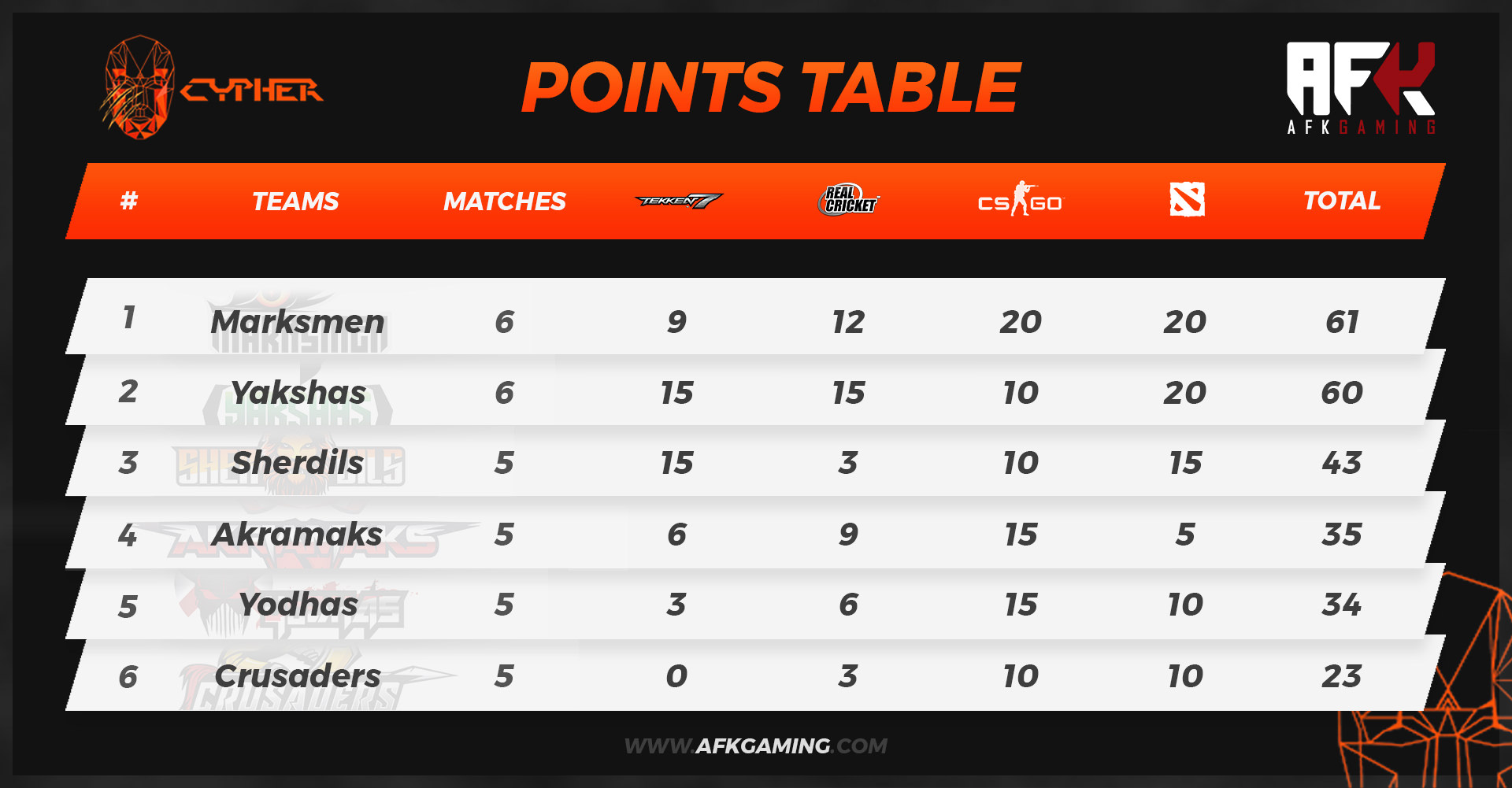