CounterStrike released an update yesterday which brings with it a massive change as Cache is pulled out of the Active Duty Group and into the Reserves Group while being replaced by Vertigo.

Vertigo fresh out of the oven making its way to the Active Duty Group has undergone quite a few changes since its original submission. The map had to undergo these changes in order to balance it as it will be seen in action at the next CS:GO major taking place in August, StarLadder Berlin, followed by other international events.

Following are the changes that have been made to the map in this patch, 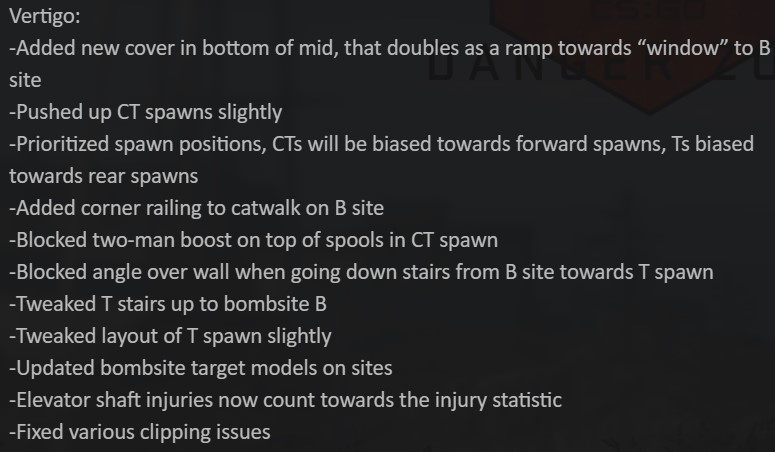 This is the first map change of 2019 and it comes right after the Katowice Major but well before the next one. This is an entirely new map that has undergone quite a lot of fixes and improvements before being rolled out.

There is no set meta or playstyle associated with the map and it is going to be a learning experience for all the CS teams in the pro circuit. It will be really exciting to see which teams get their strats right and which fail to get a grip on it.

Maybe this is the change required to dethrone Astralis? Or will the Danes be able to outplay its competition on this map as well?

The coming few months are going to be exciting with a lot of experiment being done on this new map. Let’s see what kind of a map does Vertigo turns out to be and which team is able to establish its dominance over it.

Apart from the change which is going to have a huge impact on the CS:GO competitive circuit we have a few other updates which are as follows,