TyLoo and VG.Flash to kick off their Starseries Season 5 campaigns

Asian Counter-Strike has seen quite a bit of a spike in recent times, much thanks to some controversy and of course some very good results in recent tournaments. 2 more Asian teams are set to show their talents at the Starladder Starseries iLeague Season 5 LAN finals. Let’s take a look at what they have in store for them.


The tournament consists of 16 teams from across the globe with some real heavyweights set to lock horns. Natus Vincere, SK Gaming, Team Liquid, Ninjas in Pyjamas and Virtus.pro are the real big names here all supported by teams from EU, NA and Asia.


The format and Day 1 matches


The Group stages involve a Swiss system with 8 teams advancing to the playoffs. From thereon it’s a simple single elimination playoff. The total prize pool for the event is 300,000$.

Both Asian teams have quite a hard matchup in the first round, with TyLoo facing up against Na’Vi and VG.Flash against SK Gaming. However both SK and Na’Vi are quite inconsistent in terms of performance and have tendencies to fall flat on their faces. The fact that it’s a bo3 and that these teams do not play against Asian teams so often gives TyLoo and VG.Flash some hope. North versus mousesports seems like the most closely contested round 1 encounter. 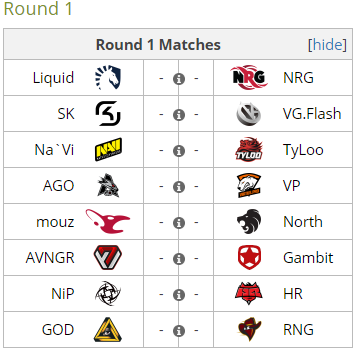 
The matches will be live on twitch on the following channels