3rd, Sep, 2018
The playoffs of the Philippines LAN Final for eXTREMESLAND 2018 witnessed the 4 teams qualifying through the group stage fight it out in a BO3, single elimination bracket at ArkAngel Caloocan.

This is how the playoffs proceded to produce the Philippines representative team TNC who fought tooth and nail to qualify for the Main Event and compete in the $100,000 tournament. 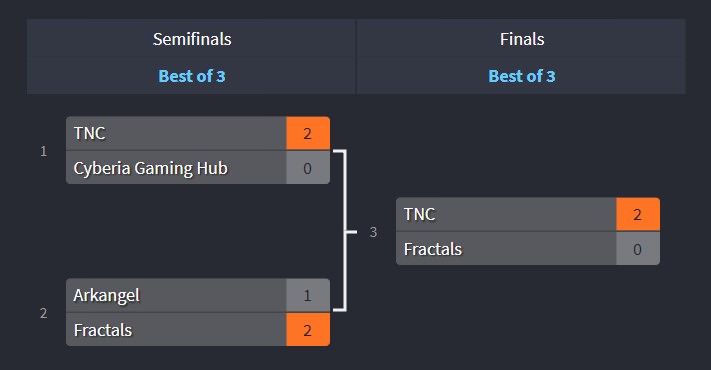 Semi-Final
The first semi-final took place between TNC and Cyberia Gaming Hub. The first match between the two took place on Inferno where TNC crushed CGH with a dominant performance winning the match with a score of '16-2'. The next match was played on Train which was closely contested by both the teams but some clutch plays by TNC ensured them the victory as they won the match '16-14'.

With this TNC qualified for the grand finals.

Now the grand finals were set to take place between TNC and Fractals.
Grand Final

The first match was played on Inferno. Fractals took the pistol round playing T-sided but TNC took the pace from the next round onwards to go on a 3-round spree. Fractals struck back equalizing the score in the following 2 rounds but TNC broke the tie with a 9 round streak bringing the score to ‘12-3’ at halftime.

The latter half of the match was completely one-sided as TNC won 4 rounds in a row to win the first match with a score of ‘16-3’.

The second match between the two teams took place on Train. The pistol round was won by TNC playing CT-side which they followed up with another 2 rounds. Fractals found their footing in the fourth round after which they won the next 4 rounds to take the lead. TNC struck back with a 7-round streak to end the first half with a score reading ‘10-5’.

Fractals came back winning the second pistol round and followed up with another win before a handful of fantastic plays from TNC won them 4 consecutive rounds. Fractals took the next round but TNC won their last two rounds to take the match ‘16-8’.

TNC is the team that will represent Philippines in ZOWIE eXTREMESLAND 2018 at Shanghai.

Congratulations and all the best to TNC. Stay tuned for updates on further qualifiers of eXTREMESLAND 2018
About UsContact UsServicesRSS
DisclaimerAdvertise With UsArchiveEditorial Team