While no official confirmation has been made by the TNC Tigers, they were spotted playing in the Starladder iLeague Invitational Minor Open Qualifiers with a complete roster.

Earlier they announced the launch of the brand along with the fact that 1437 would be leading it. Now, by the looks of things they have narrowed down on a potential roster but whether it’s just the trial period or not is yet to be confirmed.

The playing 5 as registered on faceit are as follows:

Theeban ‘1437’ Siva: The captain of the line up was already announced and he will be leading the Tigers after already having led the original TNC Dota team for a while last year.

Dominik ‘Black^’ Reitmeier: The carry player has played for teams across the globe and even in SEA with a stint with team Faceless. While his recent venture with Clutch Gamers may not have been successful, he is currently playing for the Tigers.

Lee ‘kYxY’ Kong Yang: The Malaysian hasn’t played a lot of competitive Dota in the recent years, but is a veteran of the scene, having played in 4 Ti’s till date with 3rd being his best ever finish. He too has been playing with the Tigers.

Pang ‘BrayaNT’ Jian Zhe: Another Malaysian player, BrayaNT was last seen playing for Fire Dragoon but had limited success with the team. With FDG announcing that they are playing in the WESG 2017 finals with Yamateh and Wenn instead of BrayaNT and yang, it only makes the case more solid. 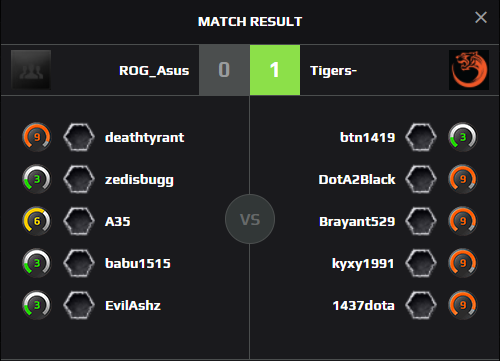 Clipped from faceit
The team has already won their ro32 matchup against Indian side, ROG Titans and face HT- next. Get a first glimpse of the TNC Tigers on the AFK Gaming stream.
Watch live video from AFKGamingEsports on www.twitch.tv
About UsContact UsServicesRSS
DisclaimerAdvertise With UsArchiveEditorial Team