With the conclusion of the last DPC event of the season, the Supermajor, all roads now lead to TI8 and everyone is aboard the hype train. 8 teams have already secure direct invites and 10 more will join them via the Regional Qualifiers. With many big teams playing in the Regional Qualifiers, there is going to be plenty of action in the months leading up to TI. Here’s a look at what details were revealed by Valve and how the community reacted to it.

The Open Qualifiers for each region will kick off on the 14th of this month and last till the 17th. For more details, click here.

The community had quite a few things to say about the distribution of slots at the main event especially with NA getting 3 spots.

This years qualifier slots is just... I can understand the Eu 1 slot, but CIS 1 and NA 3? O_O makes no sense to me. Dpc points did this?

Yes there are 3 strong NA teams, but they have also had an easier time qualifying to events, especially with previous invites. 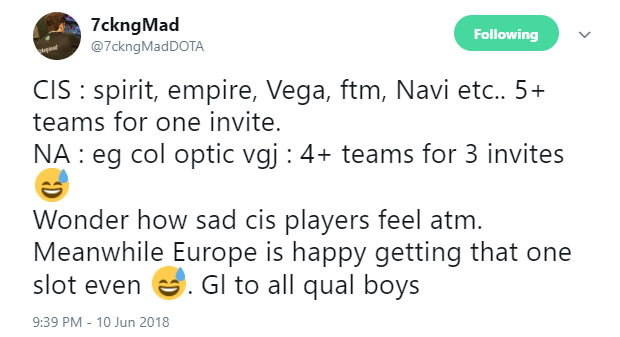 While many members of the Dota community including fans, players, personalities and talent felt that CIS deserves one more spot and NA one less, it's not entirely untrue that after the longest time, the NA qualifiers look more stacked than ever with Complexity, EG, Immortals, Optic and VG.J Storm all in the running.

A story of the internet in two parts...

2017
- 3 SEA qualifier slots praised because the region warrants 3 teams despite no inviteshttps://t.co/sy1IUmk7DC