4th, Jun, 2016
In 2015 Jimmy Kimmel, the host of Jimmy Kimmel Live, a famous night show based on satire and comedy said on one his shows that he just does not get how people like to watch others play games. While we now know that this isn’t necessarily true, it goes to show just how much the attitude has changed when it comes to playing video games. It isn’t that hard to understand why Kimmel is baffled by today’s generation watching others play. He grew up in a time when the Internet was a myth and you mostly had to fight with your siblings just to get some playtime on whatever console or device your parents got you. Watching was just basically waiting for your turn to come and not the most pleasant memory one can associate with playing games. 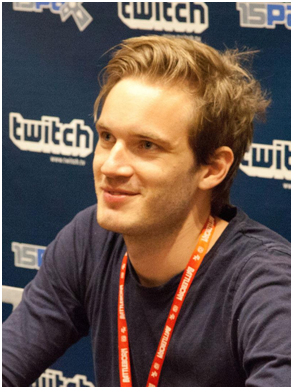 But oh how the times have changed. As of today the most subscribed channel on YouTube belongs to PewDiePie, a gamer and streamer most noted for his series of “Let’s Play” videos where he plays and comments on his play while his fans watch. Who would watch, you ask? You can’t really justify it but 14 million subscribers and over 12 billion views tells a different story. Games and gaming have become important industries of the world.


Barring Riot Games League of Legends, Dota 2 and Counter Strike draw in over a 100 million viewers across live streams in one year. Both titles are owned by Valve Corp and they have ensured that these phenomena just keep on growing. Both Dota 2 and CS:GO have spectator friendly features and statistical in game analysis at the click of a button.  Both have been equipped with action following cams so that viewers don’t miss even a bit of the action. While Dota 2 boasts prizepools of over 18 million, CS:GO brings in a significantly higher number of average viewers. So what makes the viewing experience in these 2 so different? Is it a matter of preference like football and basketball? Or is it something else?

Dota 2 is a MOBA. By this definition it has a much tougher gameplay and more complex features than most other games. Ask any Dota veteran and he/she’ll tell you that it takes quite a while to learn. The game features over 100 playable characters and each varies in terms of play style, item builds, skill cap and other factors. The game has a very steep learning curve and certain elements are very specific to MOBAs in general. But for those who persevere, lies a highly rewarding and complex game play and a feeling of accomplishment everytime you master a new hero or start reking people in a pub game. The comeback mechanics and overall thrill of a game of Dota makes the game very addictive. Dota is a game where one never stops learning. You learn to play a hero, you master a skill build you rek people. Now you play the next game, you watch the next guy completely own you with some other hero. You want to do that now. REPEAT.

CS:GO on the other hand is a classic FPS (First Person Shooter), a much more popular genre when it comes to video games. It incorporates the basic features of most FPS’s like recoil and crosshairs while obviously tweaking and modifying some features to make the game its own. The gameplay is far more familiar and simpler and it can be enjoyed at both competitive as well as casual levels and isn’t so hard to figure it out on a barebone level.

The world of Dota consists of characters and fantasy beings which are taken from the Warcraft storylines. These characters have a lore attached to them and are very detailed in terms of the various skills they possess and clan or faction they belong to. The entire realm is designed on fantasy, concept characters and magic. For a casual viewer it is hard to know and remember the names of the currently playable 111 heroes and the insane number of items they can build. Essentially only a hardcore Dota player can truly watch and enjoy the game. If you don’t know the heroes and their skills, it’s difficult to understand what is going on. A blue bolt fizzes across. What just happened? A hero just jumped several screens away. Did I just lag?

In CS:GO however the game play as well as the elements are much simpler. The basic elements are guns, something which all or most gamers at least can imagine or relate to. Everyone understands the physics like recoil, aiming, bouncing a grenade of a wall, headshots and so on. There are two factions, namely the Terrorists and the Counter-terrorists, again something we can all grasp. The simple objective depending on which side you’re on is to plant or defuse the bomb. It’s not so hard to know or appreciate when someone landed a good shot or performed a clutch play.

One of the interesting features about Dota is how the kill score does not really tell the true story. A team can be up 10 kills but maybe actually behind in terms of objectives or economy. It’s very hard to judge the game based on just the score on the header above. For that one must look at hero composition, game time, net worths, item builds and other factors.

In the case of CS:GO however the score tells an important fact. The objective of the game is essentially to be the first team to win 16 rounds. So if the score is 14-10 it’s pretty obvious who is ahead. While things like economy do matter in close encounters, it is far easier to follow and understand who is leading in a game of CS:GO than it is in Dota.

Both games feature a multitude of talent when it comes to casters and commentators. When it comes to Dota 2 it is very important to know and understand the in game terminology and hero as well as item names. It’s understandable when casters get hyped but if you have no idea what’s going on you’re just sitting and scratching your head. CS:GO mainly features play by play rundowns of the events onscreen with a bit of analysis on the side. There aren’t many words or jargon that is difficult to interpret and you can start watching at any point in the game and figure out what’s going on.

So if the number of people playing the game were directly proportional to the number of viewers, Dota 2 would be much further ahead. But owing to the easy and simple nature of CS:GO it tends to attract more viewers on streaming websites like Twitch and YouTube Gaming. What this means is that someone who is a Hearthstone or SMASH player are more likely to stumble upon CS:GO. It’s very natural to see 300k+ viewers watching a game and feel “Hey! That looks cool. I should try it out”.

In the Dota vs CS GO debate we tend to forget a major development though. Twitch is not accessible to the Chinese community and this tends to make the picture a little blurry. China has one of the highest Dota 2 playing communities in terms of numbers. However the viewership data from this region is a little obscure and not exactly accurate due to speculation that the Chinese streaming websites tend to inflate their numbers to please sponsors and investors. CS:GO meanwhile isn’t as popular in China.
Closer to home we see a similar kind of story. While Dota 2 is a very popular game over here CS:GO still gets more number of viewers in local tournaments like the ESL India Premiership. Also since a lot of older gamers here have grown up playing CS 1.6, they have a soft spot when it comes to the Counter Strike series.
So while Counter Strike has mass appeal and a more laid back gameplay and approach, Dota 2 has a much more loyal fanbase. Because of the time and effort one has to invest into actually being able to enjoy the game they generally tend to stick to it and become hardcore fans as well as players.  Here would be a perfect illustration, Dota 2 players generally only play Dota 2 while CS GO players are a bit more experimental. 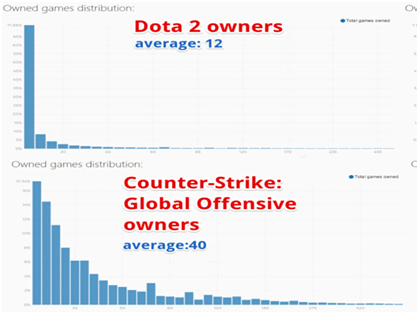