The second clean sweep of the Season

29th, Jan, 2018
The storyline for Episode 10 was a clash between two old friends, Acrid and Remstar and as is evident from the result, the captains went head to head to prove a point to their former teammates. Unfortunately for Remstar, it was the Yakshas who came out on top in this encounter, whitewashing their opponents and leaving them red-faced.

The Yakshas took victories in both Tekken and Real Cricket and already Remstar was on the backfoot, having conceded 6 points to the Yakshas. Let’s take a look at how things went down in Dota 2 and Counter-Strike.

The Yakshas came into the match looking for their first victory in Counter-Strike while the Crusaders looked to get their first points for the day. The map in play was cbble and the Crusaders got off to a good start on the CT side, taking the pistol round and the one to follow. With their backs against the wall, the Yakshas went for a partial buy and made a fast play towards the B site which caught the Crusaders off guard. They followed this up with another round and reset the Crusaders’ economy allowing them to take the lead. From there on out, the Yakshas never really lost the economy battle and kept resetting the Crusaders even after a few lost rounds. The half ended with the Yaksha’s doubling up on the score at 10-5.

In the second half, the Crusaders won the pistol once again but a shaky anti-eco cost them a chance to catch up and the Yakshas started inching towards the finish line with 3 quick rounds. By then the confidence had evaporated from the Crusaders and in their minds, the gap was too big to cover up. Skadoosh and co closed it up at 16-8 and pick up their first match of the season. Overall a good team effort from them but then again the Crusaders looked pretty out of shape.

The Dota match was the Crusader’s last chance to pick up any points for the day and it was also a chance for the captains to one-up their rivals. Both teams opted to ignore the Spectre, a hero that they’d had a lot of success with and went with very different drafts. The Crusaders opted for a Chen + Drow putting a lot of emphasis on their early to mid game pushing and laning. Acrid, however, chose the safety of the late game, picking up a Tinker, Medusa and a Void. After the first few exchanges, it was quite evident that the Crusaders would find it hard to go for pushes against the Tinker’s march of machines and the Chen put very little pressure on the enemy cores making the game even more difficult. For Yakshas, the game plan was much much simpler, fight when the Chrono was up or look for pickoffs with the Clockwerk. They were more than happy to farm it out with a convincing draft for that stage of the game.

The Crusaders tried their level best, looking for cheeky Roshan plays and smoke ganks, but they lacked the damage and the farm to go actually go pushing for objectives against a Tinker. Their timer seemed to be running out pretty quickly and the Yakshas were pretty patient, building up a sizeable advantage by slowly taking map control and then farming the entire map. At that point, the Crusaders were hoping for a miracle and unfortunately, none came their way as the gg was called at around the 42-minute mark.

With this, the Crusaders continue their run at the bottom of the table and it’s only about to get worse as the other teams all have games to be played out. The Yakshas did catch up to the leaders, the Marksmen but Venom’s team still have one game to play to be equal to the Yakshas. 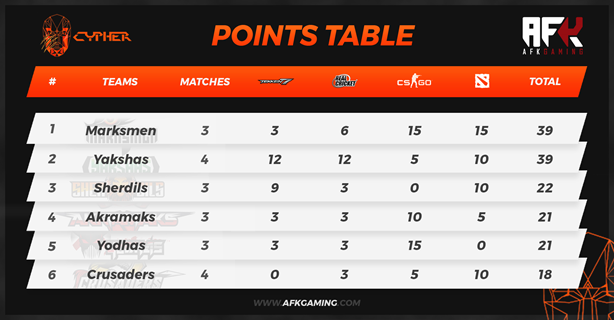