Team Maple are the winners of the SEA Fire Championship 2019

The SEA Fire Championship 2019 came to an end yesterday with Team Maple lifting the trophy and walking away with the lions share of the $10,000 prize pool.

The biggest CS:GO event of Vietnam took place in the city of Hanoi at the Cyzone Stadium featuring a total of eight teams from around the SEA region.

The eight teams brawled it out in a Group Stage where the eight participants were divided into two teams each.

Both the groups were evenly competitive with the local teams actually making quite a stand against the international invites. Both Team Shift and 24BHB finished third in their respective groups and giving good competition to all its opponents.

The two Thai teams, Team Maple and Beyond Esports qualified through to the Playoffs along with ArkAngel from Philippines and AOES from Singapore. 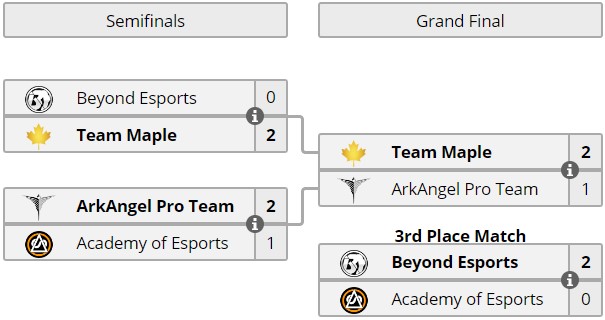 The Playoffs started with a Thai derby but the match did not live up to the hype as Maple won back-to-back games quite comfortably, making their way to the finale.

ArkAngel, on the other hand, had to work really hard to make it to the Finale. After dropping their first game, they hustled hard on Dust 2, winning the game in the second overtime. Claiming the decider they stepped into the finals while AOES dropped down to face Beyond for the third-place finish.

Maple looked formidable after taking that first map off ArkAngel in a dominating manner, but somehow they fought back on Inferno to take it down to a decider where Maple raced off to the finish line as ArkAngel could only manage to win a total of three rounds.

Beyond took that third-place finish as AOES, who looked promising had to walk away without winning a share of the prize pool.

Team Maple, have once again proved that it is one of the strongest team from Thailand, walking away as the champions of the SEA Fire Championship 2019 along with a cash prize of $6,000.

It was the second edition of the tournament following up on the success of the one that took place last year. Though the prize pool witnessed a significant drop, there were still quality teams present at the event.

The competition level was high, especially in the Playoffs. The SEA teams were in it for the victory and that reflected well in their performance as well. Hope to see more such local events in the Asian scene that help develop esport in the region.

With the ZOWIE Divina Women's Asia CS:GO Championship currently underway along with the upcoming eXTREMESLAND CS:GO Asia Cup 2019 the local scene is certainly getting a lot of quality events.