Yesterday witnessed another regional qualifier for the PLG Grand Slam 2018 coming to its conclusion with a South African team making its way into the Main Event.

Team GucciGang made their way through the Levant & Africa qualifier and are ready to fly down to Abu Dhabi to compete against fellow adversaries in the tournament.

The qualifier witnessed participation by 34 teams and followed a BO1, single elimination format till the Quarterfinals with Bo3 Semifinals and Finals.

This is how the qualifiers played out: 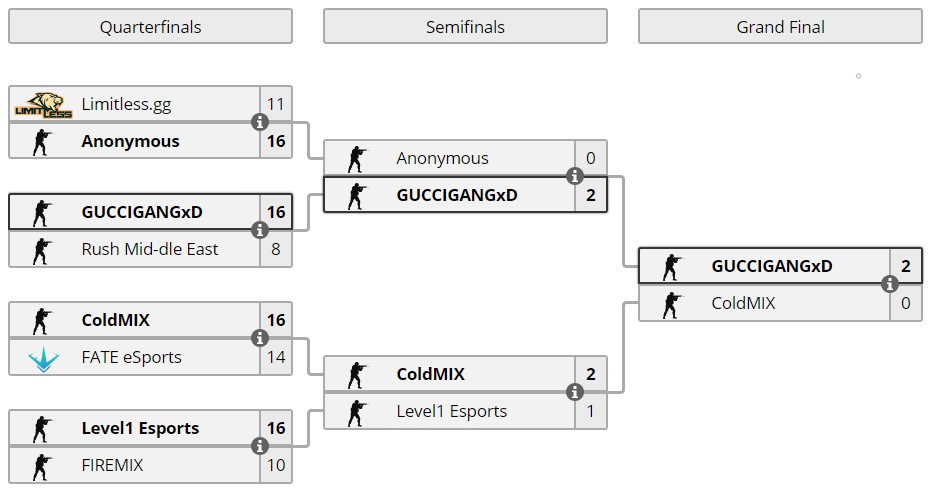 GucciGang faced off against Rush Middle East, who are considered to be one of the top teams from the Middle East Region, in the Quarterfinals. The two teams exchanged rounds on Train where GucciGang performed really well considering the reputation that Rush holds in the region, beating them by a score of ‘16-8’ to secure a berth in the Semifinals.

There, GucciGang encountered Team Anonymous. Anonymous is a good team but were nowhere near the level at which GucciGang operated. Through flawless team cohesiveness, smart usage of  utility and smooth transitions to counter the enemy if caught by surprise, GucciGang secured their victories on Mirage and Cache with scores of ‘16-10’ and ‘16-11’, respectively.

The finals were held between GucciGang and ColdMIX on Overpass and Mirage where GucciGang prevailed victorious yet again with scores of ‘16-9’ and ‘16-11’.

Joined for fun and dominated the qualifier thanks to @fejtZcsgo who out shined everyone.

Going through the qualifier without dropping a single round GucciGang qualified on to the PLG Grand Slam 2018 – Main Event.