The second day of the IeSF World Championship 2018 has started off with the Playoffs taking place between the teams that qualified yesterday through the Group Stage.

The Japanese representatives, SZ Absolute were defeated by the Swedish team, Flow.

Journey To The Playoffs

SZ Absolute was a part of Group – E where they finished at the top of the points table defeating both the Russian team, Fluffy Gangsters and the South African team, PROTEAS.

Flow finished second in Group – D where they lost to Giants but won against For Glory to squeeze through to the Playoffs.

The first match between the two teams took place on Cache where Flow started off really well and continued on to finish the first half with a 3-round lead. SZ Absolute tried to pull their way back into the game but Flow put everything on the line to prevent it from happening, holding their lead till the end and took the first match away with the scores reading ‘16-13’.

Playing out the second match on Mirage, SZ tried to pressurize Flow by adopting an aggressive playstyle but the Swedes were successful in holding against the constant barrage, even managing to clinch a crucial lead by the end of the first half. But everything changed in the second half where SZ played a wonderful CT-side, shutting down Flow to a complete stop as they took the match by a score of ‘16-11’.

The decider took place on Train where Flow destroyed SZ Absolute complete. Playing an insane CT-side, the Swedes took a massive lead in the first half with the scores reading ‘13-2’. The pressure got to SZ who were unable to even attempt a comeback losing the match with the scoreboard reading ‘16-4’. 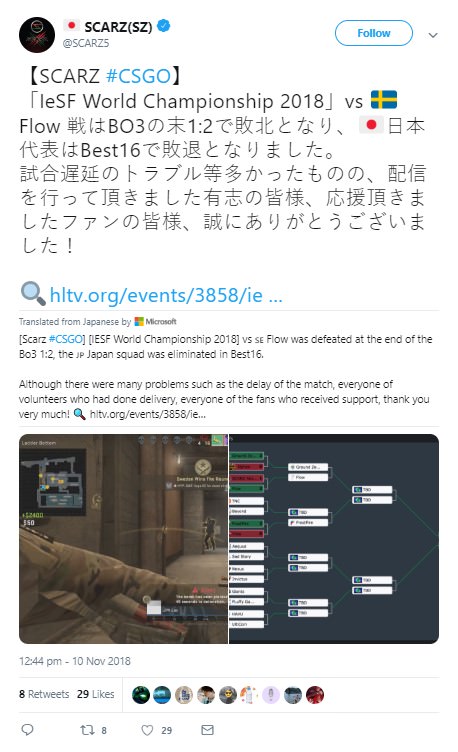 A huge upset has hit the Japanese side, SZ Absolute who were one of the hot favourites coming into the Championship. Flow have played their hearts out and deserve this win as they move forward onto the Quarterfinals of IeSF World Championship 2018.