11th, Sep, 2014
Disclaimer :
I calibrated at 4,400 solo mmr and clawed my way up to 5,024 as on date. My MMR now fluctuates between 49xx and 50xx now and I do not expect to drop below 48xx ever again.
As random and broken as the Dota 2 matchmaking system might seem I believe it to be fairly accurate unless you are of EXTREMELY high skill.. in which case your MMR will most likely already be 6k + and you will be matched with / against players of lower skill almost always.

Every now and then you end up in a game that you just can't win despite your best efforts and performance. This is usually because of someone raging and intentionally feeding, a disconnection, getting completely outpicked or because of purchased accounts getting completely outskilled (yes this does happen).
This is usually what causes most people to blurt out things like "MMR broken", "it's just a number that doesn't prove anything", "you can never escape this bracket" etc.

Our minds tend to latch on to negative outcomes a lot easier than the positive ones. Objectively speaking for every game that you just can't win, someone else is experiencing a game that they just can't lose. We all have these un-losable games (think sub 15 minute raxes in your favour) yet we never say things like "MMR not broken" or "Volvo reband".
Every system has outliers. These types of matches are exceptional cases and cannot be considered as the reason for your MMR not increasing.

Simply put the types of games one experiences can be classified as follows :

2. The Importance of Picking Sensibly

The picking phase is probably the most crucial part about ranked matchmaking. Often times, players wait till the counter runs down while his / her teammates try and pause for as long as they possibly can to secure effective counter picks. While this method does have its merits it seems a bit unethical.
A few things to bear in mind :
3. Positive Re-inforcement

The SEA server is notorious for being filled with ragers, flamers and senseless blamers. When a game begins to go south the chat sees no shortage of "bobos", "kuys" and all sorts of spam.
Initially I would classify these games as Category 1 matches and move on, however I found that reassuring your allies and staying positive helps... as long as it doesn't come across as looking too corny.

For example, if your offlaner or mid solo dies twice in the early game it tends to demoralize the entire team. When the bobos and kuys (B&K's™)  start getting thrown around I find a simple "Calm yo titties , it's just two deaths" to be a real tension diffuser.

Proceed to then take corrective steps.

If you are playing a support, back up the hero that's falling behind to ensure that he doesn't get ganked or bullied anymore. If the hero in question is a Tinker, Death Prophet, Meepo or anything else that is capable of clearing early stacks.. well.. I'll let you figure out what needs to be done here.

Alternatively, if you aren't playing the support be sure to put out helpful suggestions in a non overbearing yet authoritative way - "ES, Tinker needs help to catch up. Try stacking some camps and securing runes for him. I'll handle this lane for a bit".

Apart from just throwing out positive reinforcement, it is absolutely vital to keep your team in the loop regarding spell cooldowns, tp scroll availability etc. Precious seconds are wasted when a push could begin gaining momentum while a spell is about to cooldown.

Thankfully, with the help of the chat wheel and the ability to now alt+click almost anything, you don't need to rely on a microphone to bring your team up to speed. I've noticed teams tend to coordinate a lot better when you constantly keep them in the loop about crucial spells such as Exorcism or Ravage. 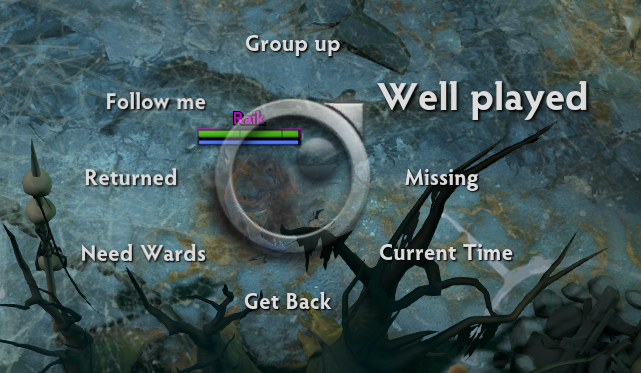 Effective communication does not mean enabling your microphone and shouting orders into it. A very small percentage of the players in this bracket on the SEA server actually use their mic let alone use it for anything other than trolling or asking for two tangos.
A few examples of things you should be telling your teammates through alt+click during a game :
5. Drop the Ego

I touched upon the importance of guiding your team during the B&K phase. However there are times when a fellow teammate is a much better player and has a ton more experience than you. If you think that a teammate's calls are making perfect sense, don't let ego cloud your judgement just because you have been making all the early game calls.

There is a huge misconception that only the higher mmr players are capable of making the best calls. While this may be the case in certain circumstances, it doesn't always hold true.
As a 4.9 - 5k player, I occasionally get matched with some of the SEA big wigs. Many of them play with private profiles and smurf names so you won't know it's them till the end of the game when you see an absurdly high number and cross check via steam / leaderboard. They understand the importance of listening to good suggestions even though they probably think and play on a different level altogether.

Players like Meracle take the game by the helm and call the shots from start to finish. People listen to them because their calls make perfect sense. If you propose a counter suggestion they will consider it in an unbiased way and determine the best course of action.  With the right attitude and some keen observation, you can learn a LOT from these games regardless of its final outcome.

On the flipside, players like Net tend to put on the strong and silent persona while playing ranked. This may or may not be due to the language barrier. They will listen to what you have to say and execute it if it makes sense to them. If not, they will not reply or give you any counter proposals. Instead they will proceed with doing what they think is best (rotations, ward spots etc.) while you are expected to pick up on these cues and play along.

Recognize when you are out of your depth in terms of calling the shots and play along when needed. Your mmr isn't necessarily an indication of how good your decision making skills are.

If you have any suggestions or observations please feel free to share them. These observations are based on the belief that your teammates know what they are doing most of the time and are good enough to belong in the current MMR bracket (4.5k - 5k). This may or may not work for lower MMR brackets where not everyone is skillful enough to utilize the advantages given to them. In such situations I believe that you need to single handedly wreck a game with a high impact hero to move higher up the ladder.
Similarly I have very little to no experience or knowledge about the higher mmr brackets however if I do get there, I'll be sure to jot down my observations once again!