Signify powered through the MPGL: Indian Qualifiers last night to grab themselves a spot at the MPGL Asian finals. The final series against ROG Titans was quite one-sided where Signify showed composure and experience to take the win.

The early game started off fairly slow, Signify picked up First Blood three minutes in and ROG TiTans picked up a retaliation kill a minute later, but past that point, something clicked for Signify and they went on a rampage.

After the 11 minute mark, Signify picked up a total of 6 kills before ROG TiTans could respond with one of their own and as a result Signify had a whopping 7k net worth lead just 13 minutes into the game. ROG TiTans simply could not do anything against them, all three of their cores had fallen behind significantly. A botched teamfight from Signify at the 21-minute mark gave ROG TiTans some hope. But it was all for naught as Signify cleared all outer towers. By the 22 minute mark, all of ROG TiTans' outer towers were down and they didn't take a single tower themselves.

The high ground push from Signify came at 26 minutes and ROG TiTans had no way of stopping it. Blizzard's Radiance lifestealer, infested in an Ancient creep proved to be a major nuisance for ROG TiTans. Signify made the most out of this choreographed chaos and took down a tier 3 tower before ROG TiTans could respond. Void getting tagged under a sentry ward inside his own base didn't help ROG TiTan's case either. Shorlty after, game 1 was in the bag for Signify.

ROG TiTans surprised everyone as they drafted themselves a Huskar with their last pick, but Signify didn't seem too distracted by it. Their Huskar lacked a layer of protection in the form of a Dazzle, Oracle or even a Tusk/Omni. Signify themselves had heavy physical damage thanks to their Troll Warlord and Shadow Fiend pickups. 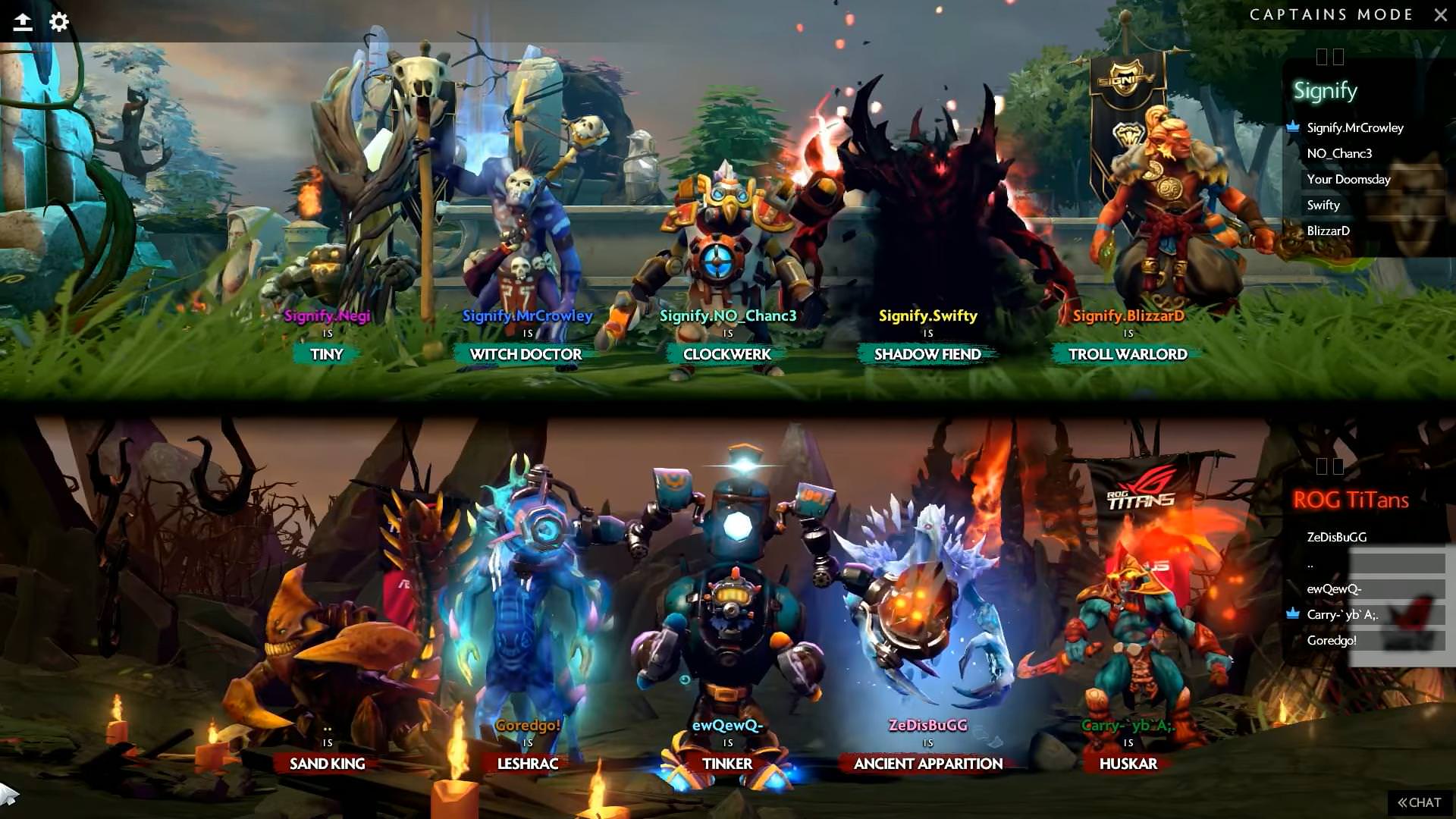 15 minutes in, the game was very even with the kill score at 10-10 and a near 1k difference in net worth, but just as in Game 1, Signify's secret sauce kicked in during the mid game and they started going hard. By the 20-minute mark Signify opened up a 10k gold lead after multiple pickoffs leading to objectives. This coupled with superior farming patterns pushed them ahead.

But a key couple of pickoffs by the Huskar + Tinker duo gave ROG TiTans renewed hope. However, it didn't last very long at all as Signify got their snowball rolling again. An early Silver Edge on Negi's Tiny helped temper some of the Huskar's survivability in team fights. Crowley seemed to be having an exceptional time with harassing ZeDisBuGG, time and again sacrificing his life for a solo kill on the AA. On one occassion, Signify even went so far as to toss the Witch Doctor behind the bottom tier 1 tower (Dire) to score a kill on ZeDisBuGG!

They pressured the top lane at 30 minutes, this time with much more success as they claimed the barracks. Soon after, Signify's net worth advantage skyrocketed to 21k and it seemed like ROG TiTans had run out of fumes. They could see the writing on the wall and after another failed high ground defense they tapped out.


Signify will now represent India at the MPGL Asia Championship: Regular Season and compete with teams like TaskUs Titans, BOOM ID, Geek Fam, and Alpha Red. The exact dates of the tournament haven’t been revealed but the MPGL organizers announced that the tournament will take place sometime during June 2018.

The top 3 teams in the regular season will move on to the Grand Finals which will be held in Thailand.
About UsContact UsServicesRSS
DisclaimerAdvertise With UsArchiveEditorial Team