The ESL Pro League 8 – SEA Qualifier continued with its matches today as we witnessed the UB – Finals take place between Signature Gaming and B.O.O.T-d[S] along with the struggle of the LB – Round 2 between  FrostFire taking on Recca Esports and Lucid Dreams going up against Beyond Esports.

This is how the bracket looks after today's match-ups, 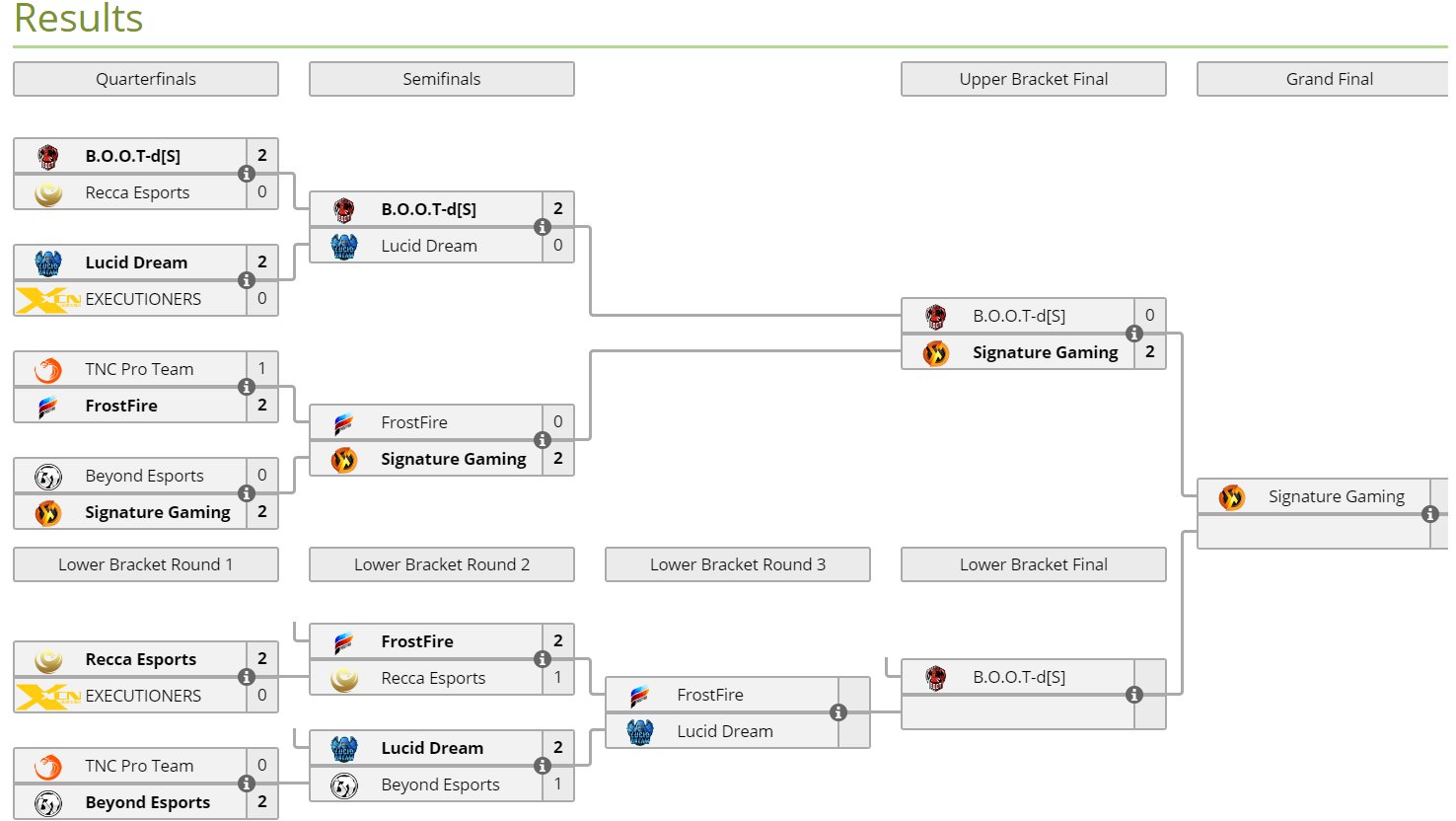 The first match between the two teams took place on Mirage where Signature sailed to a smooth win executing simple plays with perfection.

B.O.O.T-d[S] went out all guns blazing and Signature matched their pace, as the two teams went neck to neck in the first half but B.O.O.T-d[S] lost its thunder during the latter half, where they managed to win only a single round as Signature took the match with a score of ‘16-8’.

The second bout was fought on Train. B.O.O.T-d[S] tried really hard to attain an early lead but failed miserably, as a lack of focus and coordination led to Signature piling up quite a few rounds in their favour. B.O.O.T-d[S] came back strong playing as CT but Signature somehow managed to squeeze the required five rounds to win the match with a score of ‘16-14’.

Signature Gaming won against B.O.O.T-d[S] and became the first team to reach the Grand Finale.

The lower bracket struggle witnessed FrostFire taking on Recca Esports where the match went down to the decider with Recca taking the win on Mirage followed by a comeback from the Malaysian’s on Nuke with the last match set to take place on Train.

The first half was a nail-biter with FrostFire winning the clutch round to take the lead with the scores at ‘8-7'. The Malaysian’s continued to execute confident plays with a smart mix of aggressive rushes and passive mind games, it all paid in the end as FrostFire took the decider with a score of ‘16-12’.

Recca Esports were eliminated from the event as FrostFire moved ahead in the lower bracket.

The next lower bracket duel was held between Lucid Dream and Beyond Esports which also witnessed a decider being played. Beyond took the win on Mirage followed by Lucid equalizing the score on Overpass but Dust 2 is where the scores were settled.

Lucid played a fast-paced game and reaped the benefit of constantly catching their opponents in awkward setups and positions that granted them a small lead, which they didn’t give up on until the end and won the decider with the scoreboard reading ‘16-14’.

Lucid Dream moved onto face FrostFire in the next LB round as Beyond Esports was knocked out of the tournament.