30th, Jan, 2018
The Akramaks and the Sherdils came into the match with a single point separating the two, but Ritz’s team left the clear winners, opening up an 11 point lead. The Akramaks had a pretty decent showing against the Yakshas in their previous match but completely dropped the ball this time against the Sherdils.

The match kicked off with the Sherdils taking a convincing win in Tekken, their 4th win in 4 games. In the mobile title, Real Cricket, Sagar ‘Lovesx’Vyas registered his first victory to tie up the score for the Akramaks. Let’s take a look at how the teams fared in Dota 2 and CS: GO.

Train leaves the station without the Akramaks

Despite boasting some top talent the league, the Akramaks fell to the Sherdils on CS: GO in a tame 16-7 defeat. Mithil, who has had some spectacular plays and highlight-worthy clips on the train, looked quite out of form, picking up only 9 frags throughout the entire map. Meanwhile, Falken stepped up for the Sherdils, going ham with 27 kills to his name in just 23 rounds of play.
The Akramaks started off the game on the CT side, picking up the first round thanks to Kappa’s smoke defuse play. However, the Sherdils would soon take the lead, after opening things up in their first gun round. The action continued as the Akramaks then reset the Sherdils in their own gun round, and not to be outdone, the Sherdils managed to do the same. It was back and forth right up until the end of the half, but Freaky gave the Sherdils a 3 round margin with a smart Molotov play preventing the defuse at the end of the half.

After the switch the Akramaks found themselves in a bad place, losing the pistol round after rushing B. With no efforts to take Ivy control whatsoever, Akramaks only had default outer executes in their playbook and the Sherdils picked up on this pretty quickly. They would shut down pop dog right off the bat and force the T’s to come through connector, where they always had their crosshairs from beforehand. By the time the Akramaks started utilizing Ivy, Falken was in a devious mood, pushing right up and shutting it all down. There was no coming back from multiple gun round losses as the Akramaks conceded the game.

In Dota 2, the Akramaks had quite a comical draft with 4 melee heroes and the Sherdils drafted smartly picking up a Puck and an MK. The Akramaks were able to pressure and keep up with relative ease in the early game having the damage and the tankiness in their 4 melee line up. But their team fight was just non-existent, as the Sherdils swept them aside in head-on engagements. With a Dream Coil and a Vacuum to set up the Disruptors Static Storm, there was no respite for the Akramaks. And with an MK throwing down a Wukong’s command, all the Akramaks could do was watch. With minimal initiation and only single target control, the Akramaks had no business taking team fights as the Sherdils started dominating the game. While the game would end up going until the 50-minute mark, it was over quite long ago and it was just the Sherdils toying and having fun with their prey. 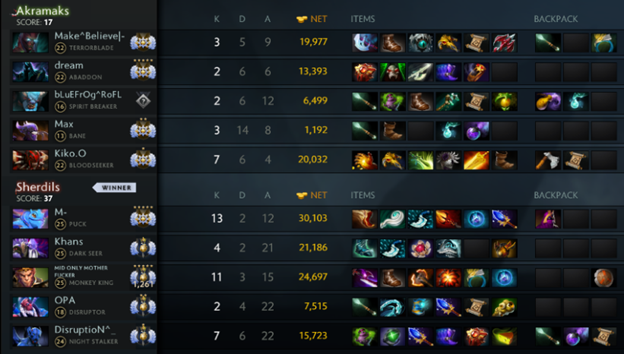 With this, the Akramaks get only 3 points while the Sherdils get a whopping 13 from the win.