The PLG Grand Slam 2018 which is set to take place in Abu Dhabi has come to the end of its first regional qualifier with Shark Esports qualifying through the South America – Regional Qualifier that took place from 26th-27th October 2018.

The qualifier which started on 26th October witnessed several BO1, single elimination rounds being played between the 64 registered teams. By the end of the day, only 8 teams remained, ready to play against each other in the Quarterfinals on 27th October.

This is how the bracket progressed:

The first semifinal took place between Shark Esports & W7M Gaming where the Sharks tore through the ranks of W7M and moved on to the finals with a series score of ‘2-0’.

W7M played really well in the first match but a great comeback from Sharks snatched the win away from their mouth. The second match observed a weak play from W7M with a serious lack in confidence as they hesitated a bit too much, overthinking most of the time which led to the team getting choked or getting caught out of position.

The two teams fought it out on Mirage in the first match where Detona cruised to a comfortable victory as Wild were always a step behind Detona. Sticking to some basic textbook plays while mixing it up with an aggressive rush every now and then secured them a decent lead early in the match, they managed to hold onto the lead long enough to walk away with a victory with the scores reading ‘16-10’.

The second match was played on Dust 2 where Wild started off well but Detona stepped up their game to draw out the score at ‘3-3’. The match went on with both the teams fighting neck-to-neck but Detona held the edge as they came out on top with a small lead at the halftime mark. It was a bit disappointing to see a complete washout of Wild in the second half as Detona won the match with the score reading ‘16-7’.

Detona Gaming moved on to face against Shark Esports after winning against Team Wild BR with a series score ‘2-0’.

The finals took place between Shark Esports and Detona Gaming with the winner directly qualifying for the PLG Grand Slam 2018 – Main Event.

The first match between the two teams took place on Inferno where Detona and Shark went toe-to-toe for the first nine rounds after which Detona found its momentum winning six consecutive rounds, leading with a score of ‘11-4’. The match continued on with no improvement shown by Shark which leads to them losing the match with a score of ‘16-6'.

The second match was played on Train where Detona overwhelmed Sharks with a solid start, winning the opening five rounds but Sharks were up for the competition as they fought back equalizing the scores at ‘6-6’ and even went on to secure a lead just before the halftime mark.

Sharks continued marching ahead finding the sync they had been trying to attain as they took down Detona with the scoreboard reading ‘16-10’.

The decider took place on Cache where Sharks stomped through the Detona Gaming line-up winning the first seven rounds in a row. Sharks kept on the winning momentum with Detona picking off a round every now and then as lost the match with a score of ‘16-5’. 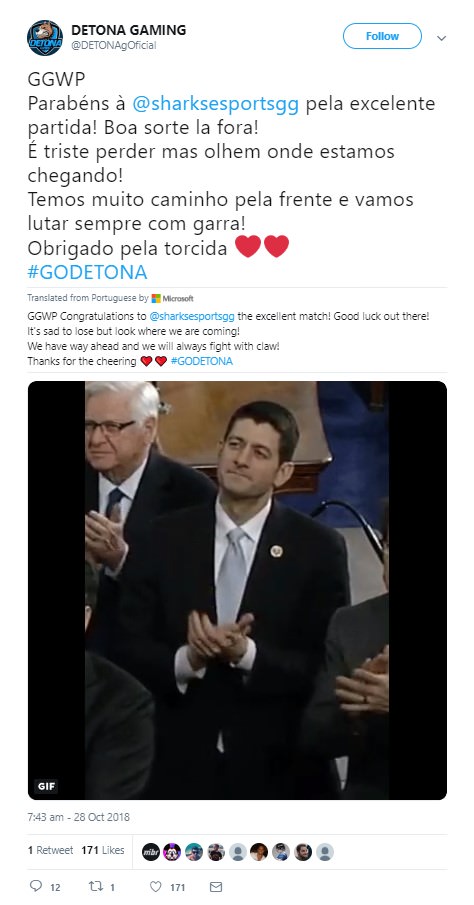 With this, the PLG Grand Slam 2018 – South America Regional Qualifiers has come to an end with Shark Esports qualifying for the Main Event as they defeat Detona Gaming by a series score of ‘2-0’.