16th, Apr, 2018
It’s finally over, the SEA Open Qualifiers of MDL Changsha and ESL One: Birmingham have come to a close and 4 teams will be quite happy with their performances: Echo International, Neon Esports; Admiral, and PG Barracx will be playing in the SEA regional qualifiers of the MDL Changsha, and ESL One Birmingham respectively.

Echo International and Neon Esports were the two teams to make it to the qualifiers and secure spots in the regional qualifiers. The veteran team, Echo International surprised us all with some stellar performances throughout their run to the finals. Whilst there were upsets in the qualifier, such as TNC Tigers losing out to SeTH Gaming; there were some notable absences as teams were also competing at the ESL One: Birmingham Open Qualifiers which was taking place at the same time.

The MDL: Changsha – SEA Regional Qualifiers will be kicking off on 17th April 2018 from which a single team will qualify for the main event held in China. We will be casting the SEA regional qualifiers on our Twitch channel as well. Do tune in. 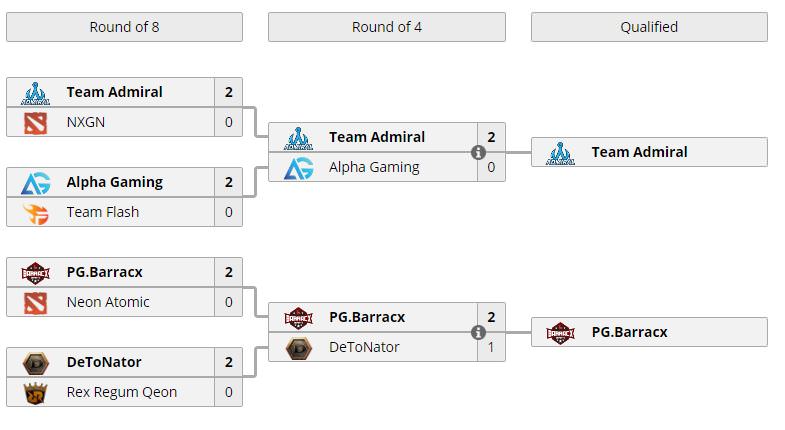 The semi-finals of the ESL One: Birmingham bracket saw Indonesian team PG Barracx take out Detonator in a 2-1 series to move on to the regional qualifiers. On the other side, a dominant Team Admiral took 2 straight games from Thailand squad Alpha Gaming to secure their spot in the regional qualifiers. Despite their strong performances, both Team Admiral and PG Barracx will need to improve their performances by a metric ton to stand a chance against teams like TNC Predator and Fnatic who will be playing there.

The ESL One: Birmingham – SEA Regional Qualifiers will kick off after the MDL Changsha: Qualifiers on the 19th of April 2018.