Former Entity Gaming coach Anthony ‘Scantzor’ Hodgson shared his experiences of mistreatment, non-payment of dues while working in the SEA region with Mineski, ETG and GESC. The coach/analyst was last seen working with the ETG Dota team, which has since disbanded.

He also coached Mineski in 2016 and was part of the talent at the GESC Minors in Thailand and Indonesia.

In a blog post, Scantzor talks about the alleged malpractices and difficulties he faced while working with orgs in the SEA region, putting his own future at risk in what seems to be an effort to try and not only get it off his chest but try and bring changes to the system and expose the accused. Among the parties accused, only ETG has made an effort to respond and for now, the story is still developing.


GESC have allegedly failed to compensate talent, players and staff for their events

It’s nearly November, and I am yet to be paid for my work at GESC Jakarta in March or GESC Bangkok in May. To the best of my knowledge, nobody has been paid for either event?—?not company staff, not talent, not players, nobody.

When I enquired about severance, I was told in no uncertain terms that the organisation did not consider itself to owe us anything - Scantzor on contractual disputes with ETG


With Entity Gaming, Scantzor’s major issue stems from the fact that he wasn’t compensated fairly after the team was disbanded.


This decision was made two months into my one year contract with Entity. Most of my players also had new one year contracts, and some of them were only a month into theirs. When I enquired about severance, I was told in no uncertain terms that the organisation did not consider itself to owe us anything. Severance, they said, applies to employees who have been working for a company for a long time and since we’d only recently started we wouldn’t be eligible. They also repeatedly insisted that we weren’t being “fired” as such, but rather that the team was simply being “let go”. I was, and continue to be, confused about where the distinction between those two things is meant to be.

They took some time to consider this, and came back to me with an offer of 15 days severance, emphasizing the fact that this was an act of generosity on their part, and that they were under no contractual obligation to pay anyone any severance.

In the end Scantzor mentions that he took the 15 days of pay as it was difficult for him to pursue a legal case in a foreign country and given the fact that they were all staying in the ETG house at the time made it difficult for him and the players to bring up issues.

Nobody wanted to risk a dispute resulting in losing out on a flight home, not to mention compromising our feeling of safety, given that we were still living in Entity’s team house for the time being.

ETG manager Sid ‘boogiesan’Joshi also responded via his own blog post which can be found here. His TL:DR mentions the following 3 points:

However, Scantzor did respond to a particular point which was brought up by Sid and it seems that Deth, who was a part of the team at the time also appears to be backing him up. The particular exchange happened on a reddit thread and at this point we are yet to confirm whether it is indeed Deth posting via that username. 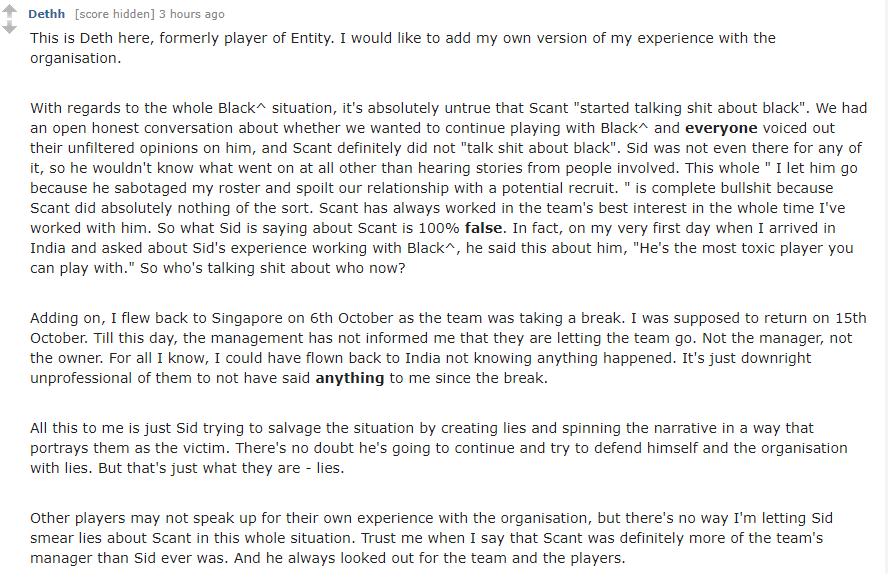 In fact the entire reddit thread is filled back and forth between Scantzor and Sid and can be found here.
About UsContact UsServicesRSS
DisclaimerAdvertise With UsArchiveEditorial Team