Predictions for The International 8 Compendium

So we kind of jumped the gun with the previous predictions eh? I still stand by what I said, Valve wouldn’t release a major patch right before TI. And tbh, the final TI patch wasn’t exactly groundbreaking.

Sure there were a couple of Minor nerfs and buffs to a few heroes but the main obligation for writing this article is the shifting meta we’ve seen in The Summit 9 and to a lesser extent, other minor tournaments like the ProDota Cup and Rivalry.gg rumble.

Again, these predictions are extremely difficult if not impossible to get 100% right. Especially considering the evolution of the metas within a single TI. Almost all of these predictions listed below are in essence a shot in the dark (albeit a calculated shot). But, that’s really no reason not to try either. After all, if you take the time to crunch down the numbers, even just for a bit, you’ll be able to make predictions that are slightly more likely to come true.

We also did a podcast on our predictions for TI8 quite a while ago, you can check them out here:

Having said that, you’ll find our updated list predictions for the TI8 battle pass below, Check it out and let us know if you don’t agree with our predictions. 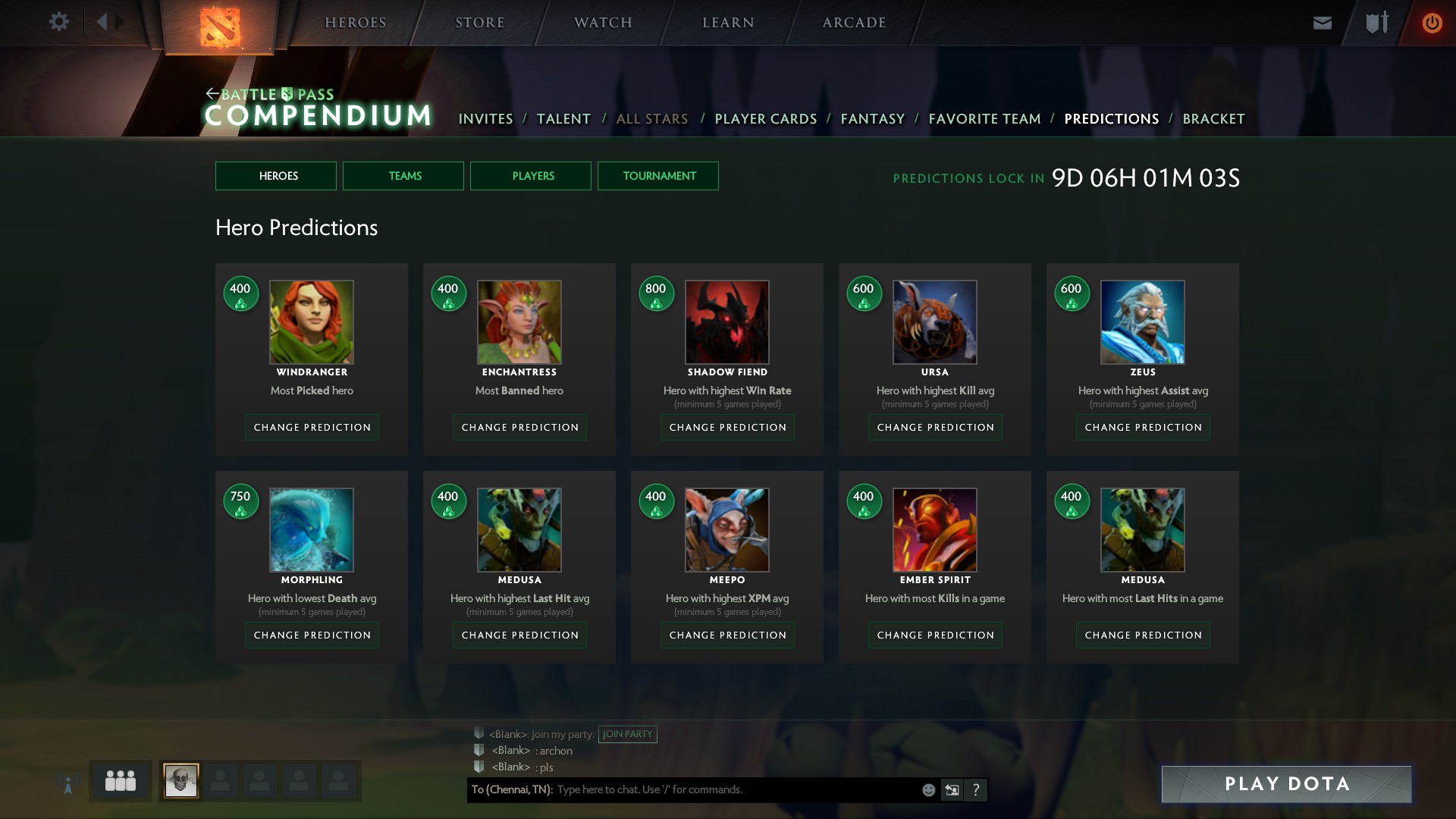 Most Picked: Windranger is still our numero uno choice for the most picked hero. She only received a minor nerf (Windrun cooldown increased from 12 to 15/14/13/12) in the latest patch and was extremely popular in 7.17 (most picked) and 7.18 (second-most picked). We expect her to see tons of play in TI8.

Hero with highest Winrate: This one usually goes to some extremely niche hero that’s going to perform well and is going to be played just enough times to qualify. I am sticking with the Shadow Fiend we predicted earlier considering his absurd winrate in the qualifiers. The hero is extremely strong if he gets a good matchup.

Hero with the highest Kill average: PA has traditionally been the hero to hold this spot in TIs but this time around we believe that another hero with extremely high physical burst and mobility will take it. Ursa Warrior has seen quite a lot of play in the recent patches which pushes him above other ‘Assassin’ type heroes like Storm, Templar Assassin and Phantom Assassin.

Hero with highest assist average: Zeus, Spectre and other global heroes are the obvious choices here. However, a case can be made for roaming position 4 heroes like Tusk or Windranger. But we’re sticking with our instincts and going for the Zeus thanks to his global presence.

Hero with Lowest Death average: While we were pretty convinced by the Medusa in our video, we’ve decided to switch it up to Morphling after considering the fact that Medusa isn’t really that tanky in the earlier stages whereas heroes like Morphling are tanky throughout no matter how bad their laning phase goes. So yeah, Morphling FTW!!

Hero with Highest Last hit average: We don’t think AM is going to be picked 5 times. Mushi and Resolt1on are the only players who still play the hero in this meta. Another hero that comes to mind is Luna but the problem with her is that she tends to have shorter games as she pushes buildings faster than the other logical choices. So we settled on Dusa because she has long games and farms consistently.

Hero with Highest XPM: Probably the prediction I am most confident with. There’s really no other hero that can farm up an XP advantage like a Meepo can. The fact that he is getting consistently picked by Fnatic and screenshots of Pros like Miracle, No[One] and many others practicing him on Dotabuff just cements it for Meepo.

Hero with most kills in a game: Single game maximums are always incredibly hard to predict because it just takes one player to have the game of his life at TI8. However, I think Ember Spirit is in a good place right now and will be played regularly. Ember has a lot of chances to go off and get an absurd number of kills than any of the rest of them.

Hero with most last hits in a game: Sticking with Medusa for all the reasons stated for the ‘Last hit average’ prediction. 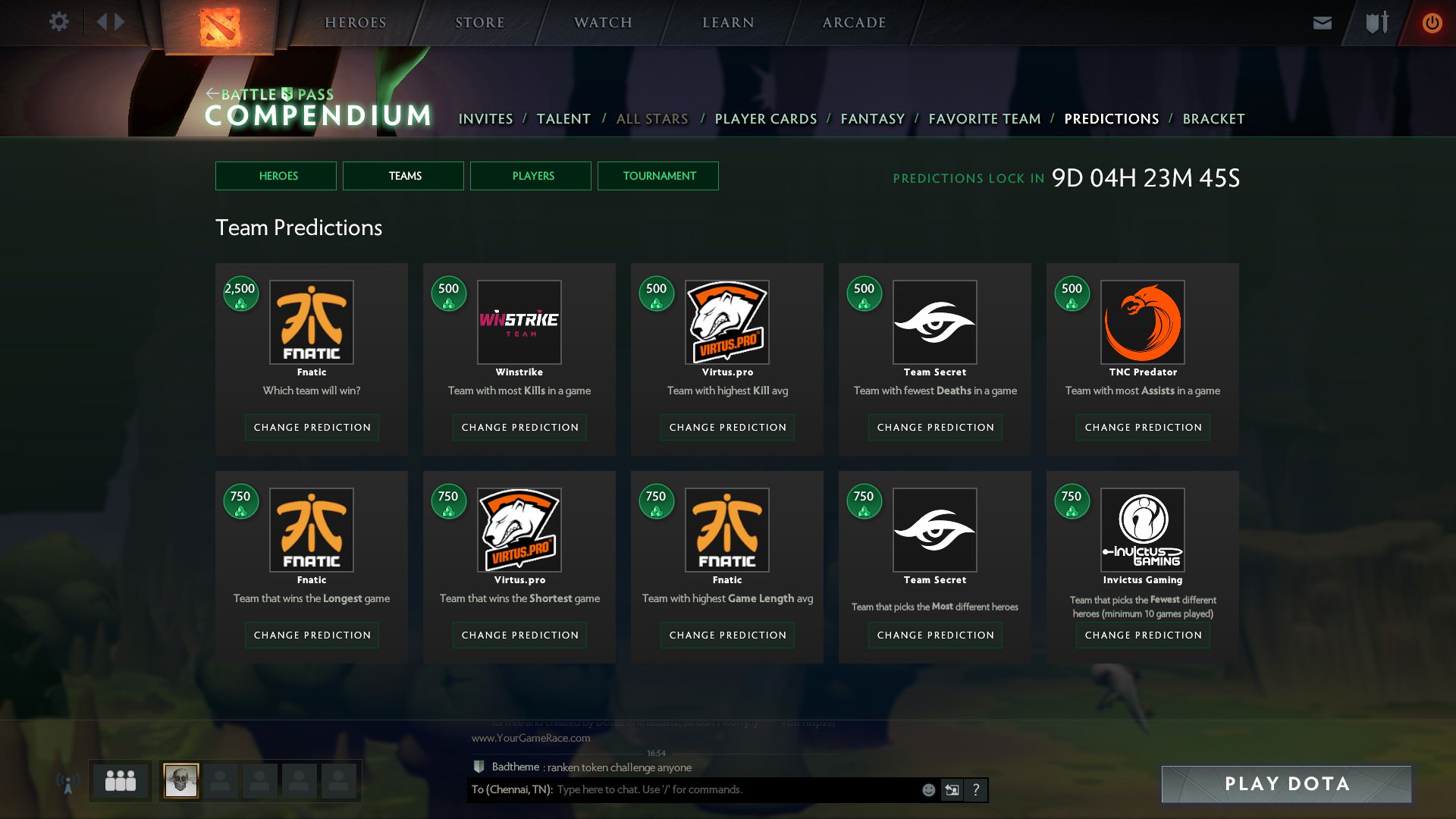 Which Team will win? There are three clear favorites coming into TI: Team Liquid, Virtus.Pro and PSG.LGD and either of these choices are as valid as the other ones. You should go with any one of them if you are going to look at the odds/stats. But unfortunately, I simply cannot be objective about this. Fnatic’s gonna take this and fulfill EE-sama’s destiny. It is written in the stars, just wait and watch.

Team with the highest kills in a game: We can see Winstrike being the team with the most number of kill in a game considering their bloodthirsty style of Dota and their tendency to extend games into the late-game resulting more kills for the team.


Team with the Highest kill average: Essentially we are looking for a team that has an above average game length, above average levels of aggression and drafts that favor teamfights over objective taking. A team like this will have more drawn-out matches with lots of kills. There are only really two choices if you take a look at the stats, Winstrike and VP. But since Winstrike are underdogs, and might start playing conservatively against Top tier teams we expect their Kill average to drop by a bit. Leaving VP for this slot


Team with fewest deaths in a game: We’re going with the stats on this one. Team Secret has been dominant in this category all throughout the year. In most tournaments, they have this one game where it gets to something like 20:1 and the enemy team simply “gg”s out of the game after yet another unsuccessful fight.


Team with the most Assists in a game: When it comes to assists, we are looking for a team that plays grouped up, rarely going for split-push tactics. They will have higher assist average and are more likely to have the most assists in a single game. Hence we’re going with TNC Predator. They lead every Dota 2 team all season long with a minimum of 30 games played with an average of 64.73 assists. We do not expect that to change any time soon.


Team that wins the Longest game: Fnatic and their long-game shenanigans make them an easy pick for the team that wins the longest game and the following category. Of course, they’re going to lose many of their long drawn out games, but there’ll always be that one chance where DJ/Abed puts the team on his back and carries them to victory.


Team that wins the shortest game: Shortest Game is not necessarily the same as the lowest amount of Deaths. The recipe for the latter is a complete outdraft and the length of the game is highly dependant on how willing the enemy will be to admit defeat, when they are essentially stuck in their base with nothing to do. Virtus Pro is the team that is most likely to achieve this with their going straight for the throat playstyle, so we’ll stick with them for this.


Team with the most different heroes: We are looking for a versatile team that is likely to do well in the tournament, playing more matches and having more opportunities to pick different heroes. It has to be a highly adaptable team, but it shouldn’t necessarily be too dominant. Team Secret tick all of the above requirements and are statistically the team to play the most number of different heroes in the DPC. So we’re picking them for the win.

Team with the least different heroes: Essentially, we are more or less looking for a team that will get eliminated during the group stage, coming to the tournament underprepared and having a limited amount of strategies. Someone who statistically and realistically doesn’t stand a chance against these teams. Personally, I feel Invictus Gaming will be that team considering that all of the rest of the teams have already proven themselves in the DPC circuit. And Team Serenity looked like a serious contender in the Chinese qualifier while IG looked lost in many a game. 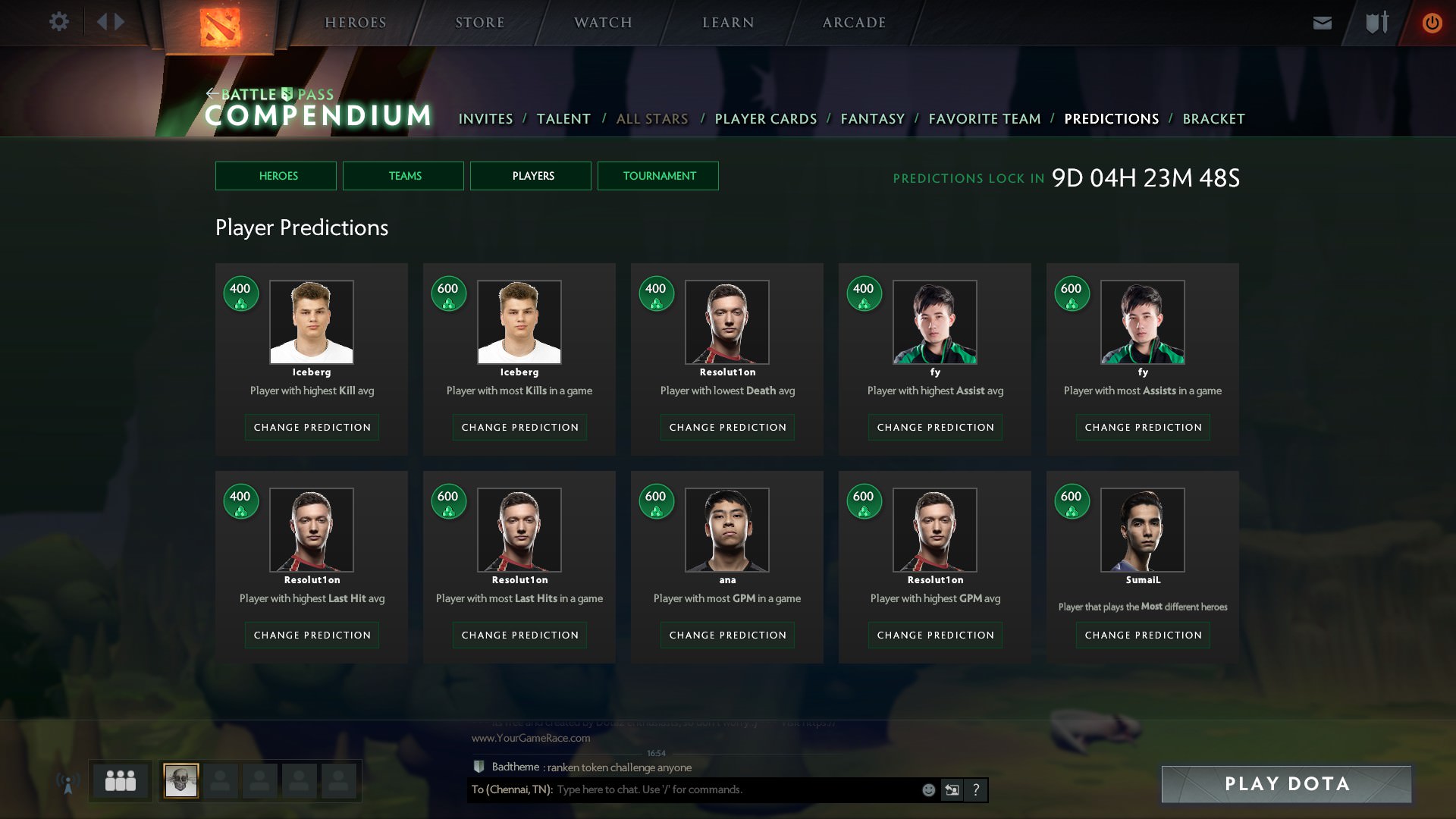 Player with highest kill avg: Bogdan ‘Iceberg’ Vasilenko is the only player at TI8 to average more than 10 kills a game, making him the prime pick for this particular stat.

Player with most kills in a game: We’re gonna go with Iceberg for this one as well considering how much Winstrike depends on him to set the tempo by finding kills all over the map, which would allow him to amass a massive score in this department.

Player with lowest death avg: Roman ‘Resolut1on‘ Fominok is a safe pick for the because of his risk-averse playstyle.

Player with highest assist avg: Personally, I feel like experience will allow fy to emerge victorious in this contest—he is experienced, plays on a team that is a clear favorite and often goes for risky, yet mostly rewarding plays.

Player with most assists in a game: Again, following the same logic as we did with the previous prediction, we expect PSG.LGD to have a bloodbath game and win it, hence our money is on fy.

Player with highest last hit avg: Longer games mean more last hits, so we are looking for a farm-oriented team that likes to stall the games, fight little and farm efficiently on one player in particular. If you follow this train of thought it’s difficult to argue against Resolut1on.

Player with most last hits in a game: Again, I might be tunnel visioning but there’s no one other than Resolut1on who gets Antimage, Medusa, or Arc Warden picked for him more often. Hence he always stands a pretty good chance to take this record.

Player with highest GPM in a game: This section can be roughly translated into “which team will pick Alchemist and make him work”. Of all high caliber teams attending this TI, only OG seems to pick him fairly regularly for Ana. So I’ll be picking him for this particular stat.

Player with highest GPM avg: I think it’s pretty clear the smart money is on Resolut1on for any gold related stats. So I pick Reso. Again.

Player that plays the most different heroes: Logically, this should be on a player from a team expected to go far in the tournament. However, I feel like EG has a history of showcasing a variety of strats/picks in the Group Stages saving their best strats for the playoffs. Since the King returned back to the midlane, SumaiL has played over 25 different heroes and has grabbed a position on this list. 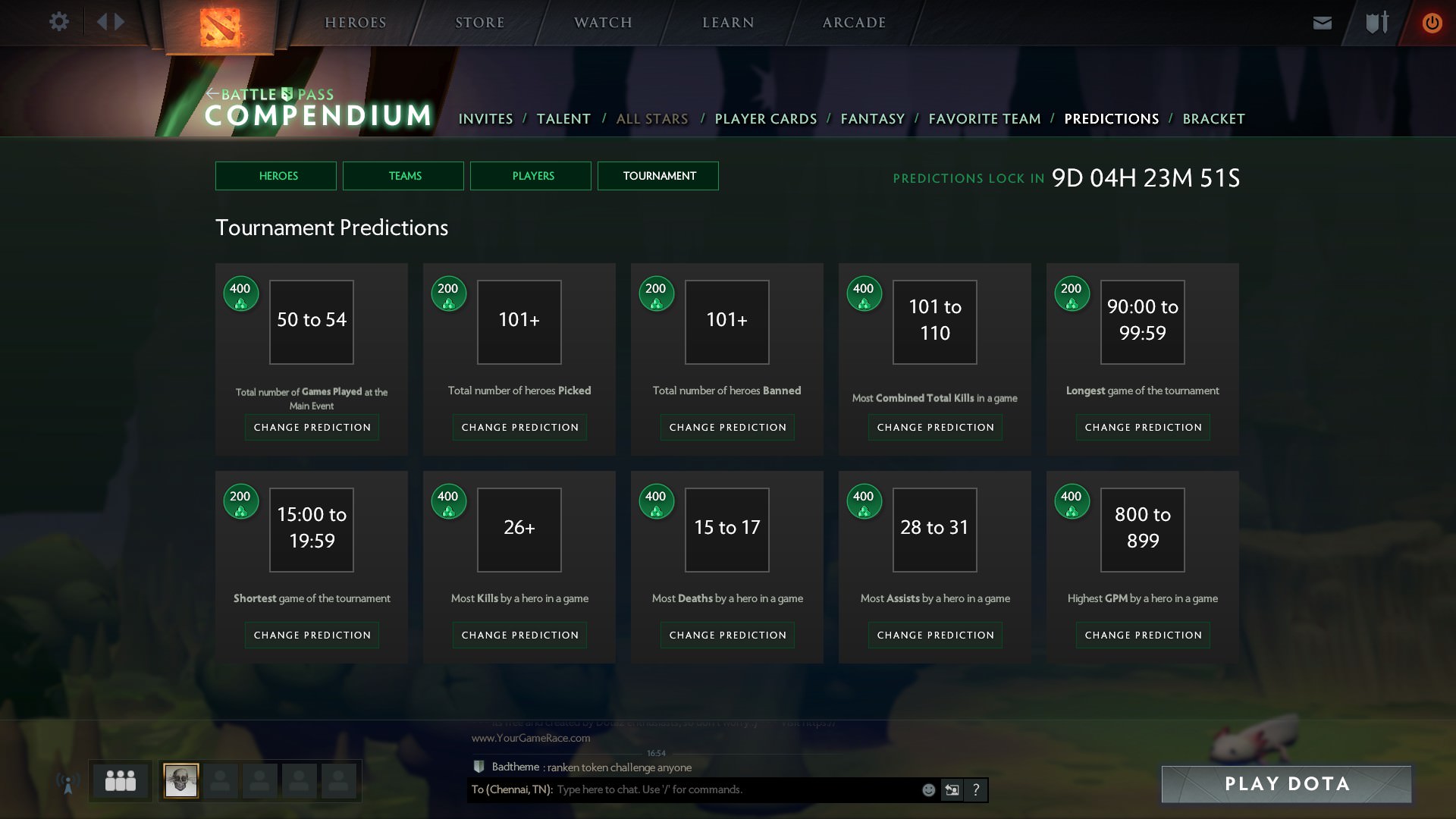 You can find all the explanations for this particular section in the video we made. Nothing really has changed as a result of the patches in this section.