Patch 7.14 brings a host of controversial tweets along with it

28th, Apr, 2018
A new week and a new patch was released once again, on the eve of a Major tournament. 7.14 went live on Thursday, just a day before the first ever Russian major, Epicenter kicked off. What followed was a myriad of Tweets from Coaches, Pro Players alike which forced Valve to step in and make a massive announcement which will change the Dota 2 Pro Circuit for good.

It all started with Team Secret’s coach, Lee "SunBhie" Jeong-jae tweeting out that the fortnightly changes are not making the competitive scene any better and that all the prep work done by a team goes down the drain when Valve changes the patch right before a Major.


You used to be able to prep for a tourney. Now, it's nearly all intuition and luck. Either you somehow binked on the right concept or you did not. How is this a competitive game? Why don't we ability draft while at it and spawn SSBM items, pokeballs and everything?


Sumail “SumaiL” Hassan too voiced his concerns on bi-weekly changes causing too many meta-shifts in a short duration destabilizing the scene, especially considering that there are Major and Minor tournaments every week which are massively influenced by these changes.


Why do valve/icefrog feel the need of changing the game every 2 weeks it's absurd how big the changes are they were supposed to be minor, do consider there are at least 2 million dollars tourneys every month. No other sports do it and their games stay just as alive. #nomodehipstr


SEA’s own, Jacky "EternaLEnVy" Mao, replied to SunBhie’s tweet adding that there are players who receive information about changes before they're announced.


What I dislike the most is that some teams clearly know whats coming in the patch and other teams don't.


While the tweet in itself was just an allegation without any proof, it prompted OpTic Gaming’s midlaner, Quinn "CCNC" Callahan to say the following in Twitch chat. 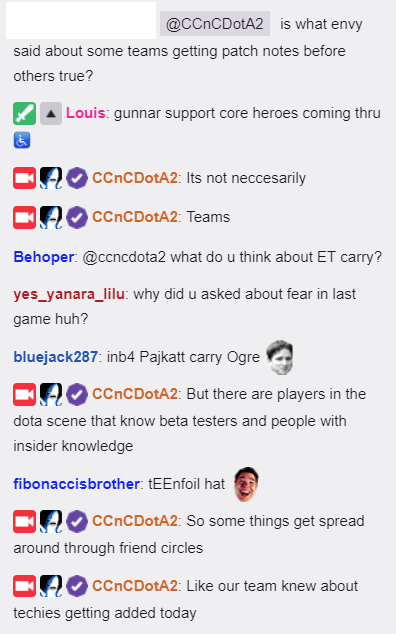 Confirming that some pros have connections with IceFrog's beta testers allowing them to get more information about the Patch and Meta-shifts beforehand. With this, he has also virtually confirmed that his team knew that Techies would be added with the new 7.14 patch in advance.

OpTic Gaming appears to not be the only team to know some of this information in advance, as stated by both Envy and CCNC, though they did not call out any team specifically. It is implied that the "privileged few" keep this information from being shared with other teams, understandably. It is hard to say which other teams have such an advantage and how much difference does it make exactly, but the fact is that Valve needs to plug this hole and restore competitive integrity.

In response to all this, Valve has implemented a stop-gap fix for the rest of the season, tweeting out that patches will no longer be rolled out at the start/middle of a Major and instead would be released when the tournament ends.


For upcoming Majors where the Thursday patch would land during the tournament, we will instead be releasing the patch at the end of the event.


While this statement will calm down, the aforementioned pros and more. The teams attending the only remaining Minor of the season will still have to be vary considering that “upcoming majors” seems to imply that GESC: Thailand could get a mid-tournament patch since it's only a minor. Either that or the statement was rushed and forgot to include minors under its purview.

What is your opinion on the new system? Do you think Valve’s response is good enough? Let us know by commenting below.
About UsContact UsServicesRSS
DisclaimerAdvertise With UsArchiveEditorial Team