This maybe BOOM ID’s third consecutive Minor in the DPC this season, but they find themselves in an all too familiar position - on the brink of elimination in the lower bracket. However, the team has managed to improve upon their performances in the previous two events by ensuring that they won't be eliminated in last place.

A stellar run in the group stages saw BOOM ID take down both NiP and Gambit, to finish second in their group. However, it seems as if many teams didn’t give a lot of importance to the group stages since all 8 teams started in the upper bracket anyway.

In the playoffs, BOOM ID swept aside Chinese powerhouse, Ehome, 2-0 in the first series. To be fair, Ehome, who have already won a Minor this season have looked shaky of late and have had a series of roster changes that have left them looking iffy.

In the upper bracket semifinals, BOOM ID, took on the Swedish side, Alliance, and despite an impressive performance, succumbed to a 2-1 defeat. Alliance edged out games 1 and 3, on the back of superior late game execution while BOOM ID took a quick victory in game 2 with an all in AOE teamfight heavy draft. Nonetheless, BOOM ID’s performances were impressive across all 5 of their games yesterday and they kept it close.

However, the team now find themselves in the dreaded lower bracket, where they have to play bo1s to stay alive. They’ll need to win 2 bo1s to make it to the lower bracket finals which is a bo3. 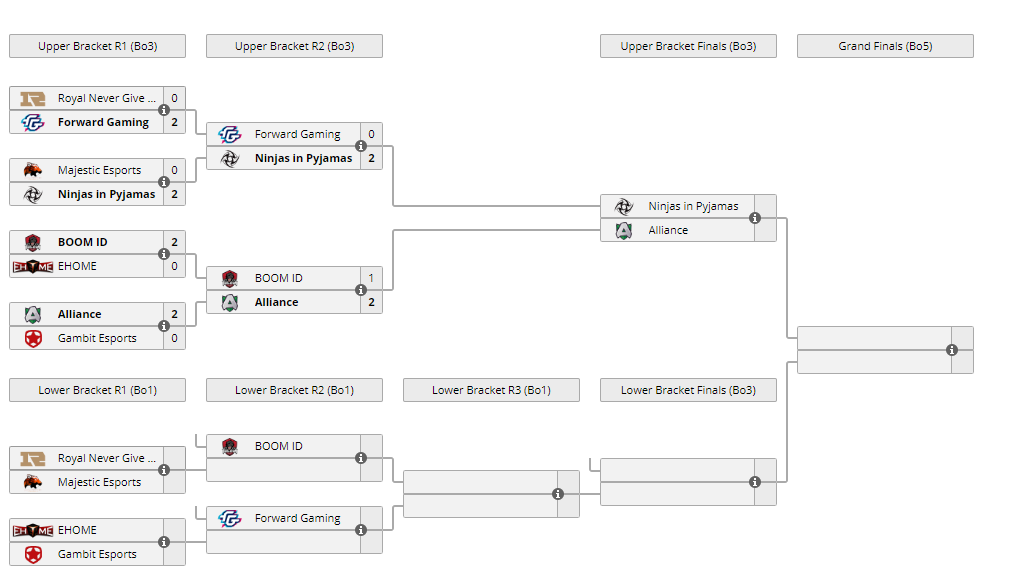 
Elsewhere, NiP and Alliance will be fighting it out in the upper bracket finals, while RNG vs Majestic and Ehome vs Gambit are the first matches in the lower bracket.