NRG, FURIA, INTZ & Sharks make it through to the playoffs of Americas Minor Championship

The race to StarLadder Berlin Major 2019 has begun with the Americas Minor Championship taking place in Berlin, coming to the end of its group stage today. Out of the eight qualified teams, NRG, Sharks, INTZ and FURIA have made it through to the playoffs after two intense days of fighting through the group stage.

INTZ Blazing Through To The Playoffs

Oh boy! was INTZ on fire stepping into the minor, the Brazilian squad were unstoppable on their way to the playoffs. After making quick work of FURIA in their opening match, they went on to take down Luminosity Gaming, ‘2-1’, to finish on top of their group.

They did not crush the opposition or had a very dominating run but they played well enough to survive through the group stage and make it to the playoffs. There were times when it did not look as if INTZ could pull back into the game but they stepped up to the task when required and reaped their rewards.

After a shocking defeat against INTZ in their opening match, the seventh-ranked team in the world really got its morale hammered. Facing back-to-back elimination matches, the Brazilians pushed through to make its way through to the playoffs.

Despite faltering in their initial match, KSCERATO and co. secured clean ‘2-0’ victories against eUnited followed by Luminosity Gaming quite comfortably. They were not able to dominate its opposition but then again FURIA is not known for such antics, instead, they kept true to their aggressive, fast-paced game and it kept working in its favour.

NRG Breezes Into The Playoffs

The American-mix as expected took a clean double victory to qualify onto the playoffs while also finishing on top of their own group. They destroyed Team One in their opening bout but were not able to do the same with Sharks, who applied good pressure on the opposition but not enough to actually slip a map in their favour.

NRG performed as expected, they have till now not dropped a single map in the minors and are one of the favourites to make it through to the Majors. Until something really tragic doesn’t take place, their loss in the playoffs is inevitable.

After taking down Team Singularity in their opening bout the Sharks confidence grew as they became hungrier to taste more of it. Though they went down to NRG in the winner's match-up, they had a nervous decider against Team Singularity.

After dominating them on Nuke, they got hammered on Vertigo, taking the match down to the final map. Train went their way as they had a fantastic T-side, knocking Singularity out of the minor and taking that last slot in the playoffs.

With this, the group stage of the Americas Minor Championship 2019 has come to an end with the playoffs all set to start tomorrow onwards, as the four qualified teams are ready to bring out their ‘A-Game’ in order to make it to the Major. 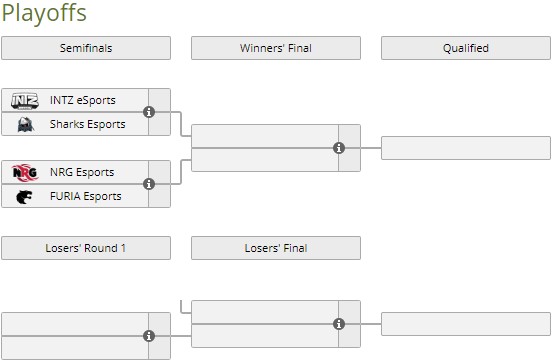