NeiL_M joins Grayhound Gaming as a coach on trial basis

Grayhound Gaming has been facing a lot of success since qualifying for the Katowice Major that took place earlier this year. Though they could not manage to win any matches in the Challengers stage, it was a big step-up for the Australian squad.

Since then they have been directly invited for the COBX Masters 2019, they played through the Oceania Qualifier to qualify for the IEM Sydney 2019 and recently they even made their way into the final Group Stage of ESL Pro League Season 9 - Oceania.

Today the team has acquired the services of Neil ‘NeiL_M’ Murphy as a coach on a trial basis. The team has certainly dominated the local scene but have failed to live up to the hype against international teams. Their loss to a tier two Thai team, Alpha Red, at the COBX Masters 2019 was a real shock. 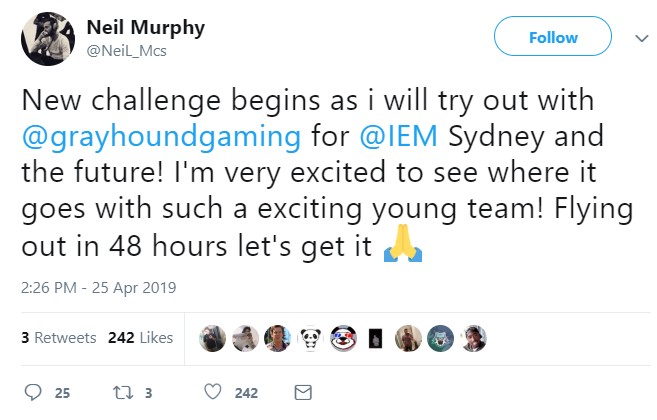 Neil_M is an experienced coach who started out his career as a coach back in 2012. Since then he has coached tier two teams like Reason Gaming, MnM Gaming, etc and worked his way up to coach Imperial and X-Kom.

He has been working with the team since some time now, joining their practice sessions and training them. But his official debut will take place with the start of the upcoming IEM Sydney 2019.

Neil made the following statement about his situation as the coach of Grayhound,

“I'll be heading to IEM Sydney this weekend with Grayhound! It will be on a trial basis to test if it fits both sides ingame & with our timezones. I've already been in scrims with them from home and the guys have been very welcoming! I will help mostly on mentality/preparation & bringing some new plays from EU mixed into their style.”

Grayhound Gaming are going into IEM Sydney 2019 as one of the favourites mostly because they are the strongest home team and who doesn’t like to support their local team?

The current Grayhound line-up is as follows,