NA look dominant as EG and VGJ.Storm take the Top 2 spots in the The Summit 9's Group Stages

The playoffs are finally set with the Group stages of The Summit 9 finally coming to an end.

It was no surprise that both NA squads, Evil Geniuses, and VGJ.Storm were the two teams standing tall and moving on to the Winner’s Bracket Finals considering the gulf in the table which we saw at the end of Day 2.

There were a few surprising results as well, with some underdogs biting back and some of the underperforming teams getting themselves together and posting great results. Day 3 was an interesting day.

Here’s a brief summarization of the Day’s matches. But before we get there, here's a clip GrandGrant making another weird bet.

The Gang plays a Support Ursa

The first match today saw VGJ.Storm take on Let’s Do It. The excitement started long before the game began as VGJ.Storm took the Phoenix-Wyvern combo in the first phase of the draft. Let’s do it, however, seemed to be prepared for this with an immediate Silencer pick. They also busted out a fourth pick Kunkka, not a hero we see very often these days but ghostship does offer tons of magic block. But both picks did not prove to be effective counters to the Teamfight combo of VGJ.Storm.

Let’s do it’s lanes couldn’t get enough of an early lead and a few bad fights later, in part due to a series of missed hooks from eL Lisah’s Pudge, VGJ.Storm cruised to a very convincing win in 22 minutes. Game two saw a more stable draft from Let’s do it, while VGJ.Storm picked up a support Ursa in order to counter the European’s 3rd pick Drow Ranger. Unfortunately, kacor had an absurdly good game on his signature Windrunner allowing Let’s Do It to get a huge lead in the mid-game. Let’s Do It did an excellent job of negating Ursa rotations and gimping the carry Nature’s Prophet, and the game snowballed from there into a 36-minute win for the Europeans.

The Brazilians bring on the paiN

Let’s do it would have been hoping for that momentum to carry them through their next game but paiN Gaming took a quick first game by unleashing the Omar “w33” Aliwi’s Skywrath Mage to devastating effect.

The 32-minute Game 1 loss seemed to take the morale right of Team Let’s Do It as they just crumbled to William "hFn" Medeiros’ Tinker in Game 2. While paiN had some 322 moments, they never really looked like they would lose the game.

Next up, paiN took on OpTic Gaming. They needed 2-0 the NA team for a chance to go to the Winner’s bracket finals. In game 1, even the smallest of OpTic Gaming’s errors was brutally punished by an absolutely breathtaking Weaver performance from hFn. Managing 12 kills against a Lina and Faceless Void, hFn proved once again that the SA region should not be taken lightly as paiN Gaming outplayed and outexecuted OpTic Gaming to win the game.

In game 2, paiN surprised everybody with a Magnus-Troll duo. While the game was close for a long time, OpTic Gaming’s vision game across the map proved to be the difference maker as the NA squad fully capitalized on positioning errors from paiN Gaming to dodge Magnus RPs and close out the game.

Evil Geniuses stand strong in the NA vs NA showdown

Perhaps the greatest NA rivalry of recent times, OpTic taking on EG has always provided us with some fantastic games. But this was the first time the two teams have gone head to head against each other in such a casual setting like the Summit.

In the first game, OpTic Gaming opted for an offlane 33 Dark Willow, While EG took Chen to counter him. Despite a strong level 1 rune fight for OpTic that secured them first blood and the bounty runes, EG’s early rotations proved too much for OpTic. SumaiL’s Invoker snowballed the game with a series of precise sunstrikes to a 20-minute victory. For game 2, OpTic went with far more standard picks, but it wasn’t enough to save them. EG continued to rotate better early and take better fights, and while it took them longer it was just as convincing a victory as the first game.

So the first place team in the Group stage was taking on the last place team. It should have been a relatively easy game for EG to take, but when will teams learn to not underestimate EE teams.

In the first game, Evil Geniuses came out looking hot and took a decent early lead. However, neither team managed to secure an insurmountable lead. Both teams traded teamfight after teamfight, but one player shone above the rest: Abed with an absurd 15/0/19 showing. Finally, more than 60 minutes in Fnatic managed to catch out EG one by one, ending up diving the tier 4 towers and taking the first set of rax thanks to that engagement. Fnatic managed to get another pick which they also capitalized on with a successful high ground and EG tapped out at 65 minutes.

In game 2, Evil Geniuses opted for a Broodmother to go with their carry Weaver, but neither of those heroes had a big enough impact after the laning phase as Fnatic’s Storm Spirit and Lycan proved too strong in fights. In the end, Fnatic edged it out with Storm getting to his patented ‘Balling out of control’ late game stage. Still, another close game that lasted almost 50 minutes.

Here’s how the playoffs have shaped up: 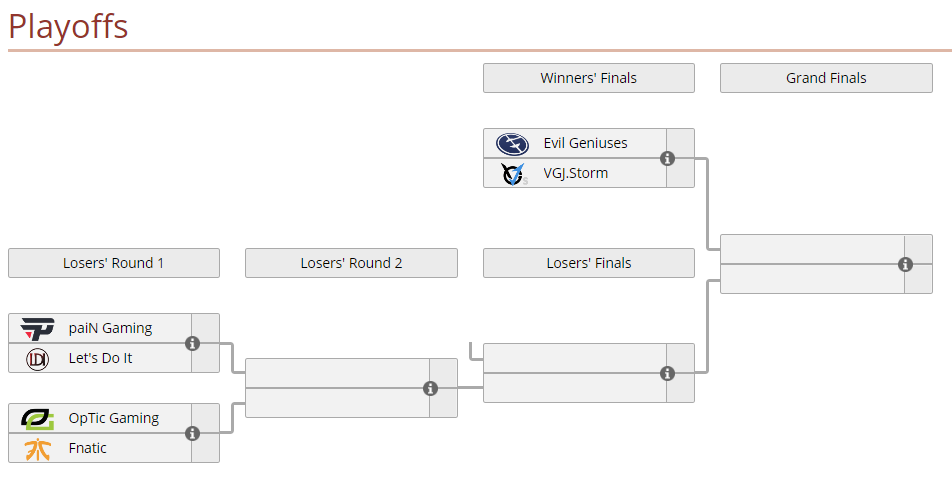 With all these in mind, we are looking forward to the best-of-three playoffs series at Dota Summit 9. The action will kick off today at 09:30 PM IST | 12:00 AM SGT, with PaiN Gaming pitted against Let’s Do It in the opening lower bracket series, followed by OpTic Gaming vs Fnatic.