Massive Roster Shuffle for Beyond Infinity and Invisible Wings

6th, Sep, 2016
Why should India be left out of the global Dota 2 roster shuffle drama!? Not too long ago, Bari ‘ZeDisBuGG’ Anwar publicly announced his retirement citing personal reasons as his motive for doing so. Speculation was ripe that a new support would be picked up by Beyond Infinity to fill the void left behind by ZeDisBuGG’s departure.
However Beyond Infinity and Invisible Wings have now announced a merger of sorts with a complete roster mash up. The new organization will now play under the banner of ‘Entity Esports’ and the primary Dota 2 roster will be consist of the following : 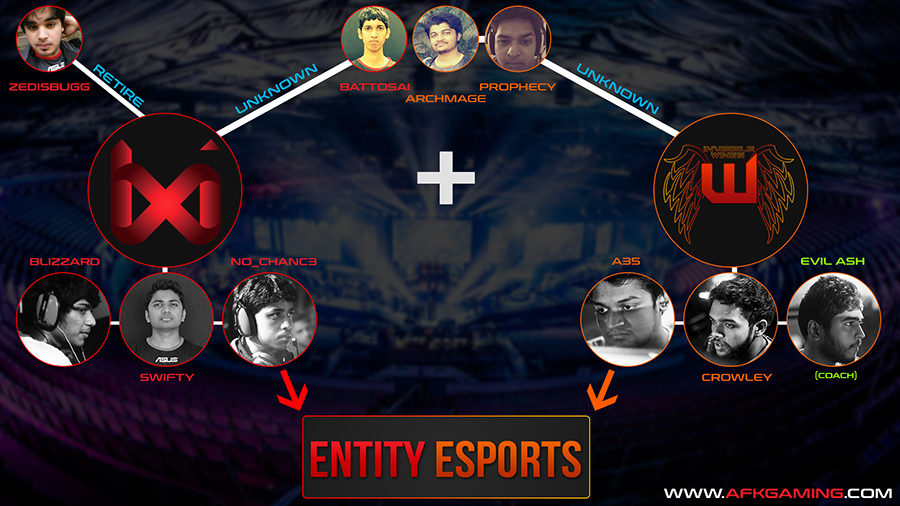 The Indian Dota 2 Roster Shuffle in a Nutshell

This leaves a big question mark on the fates of Prasad ‘Battosai’ Nalawade, Puneet ‘Prophecy’ Sangolekar and Harsh ‘Ingenious Archmage’ Shah. A secondary team is set to come into existence under the same banner and while Beyond Infinity have announced that Battosai will be a part of it, we aren’t sure about the future plans of the two former Invisible Wings players.

Here’s what the owners of both teams had to say about the move :

“SEA is very competitive now so we felt the need to create this lineup to open up our draft and have highlight skilled players in the same team” – Neerav Rukhana, Beyond Infinity.


"Recently bith the gaming houses were doing good and had started to come out as favourites. We realised that if we both can merge our talents then there would certainly be a clear favourite in the Indian eSports scene and can target International eSports scene." - Kanishka Singh, Invisible Wings.

As the South East Asian tier 1 Dota 2 circuit enters a phase of consolidation with the likes of Iceiceice, Mushi and more forming top tier teams, a move like this seemed inevitable if Indian Dota 2 was to have any hope at all of being competitive. With that said, a drastic roster shuffle like this will likely shake the confidence of existing and potential sponsors once again. We have a couple of questions on our mind that would make for an interesting discussion. Let us know your thoughts on these in the comments below or on the FORUM :
Original Announcement
About UsContact UsServicesRSS
DisclaimerAdvertise With UsArchiveEditorial Team