Continuing on our report from yesterday that pointed towards Signify undergoing changes in its current line-up, we might have some more facts to bolster our claims that Marzil and Crazyguy might just be parting ways with the Signify's active roster.

Earlier today, Agneya ‘Marzil’ Koushik announced on his Facebook page that he would be playing the ESL One Cologne 2019 - Asia Open Qualifier #2 with a mixed team called ‘Tempus Troupe’.

At the end of his post, Marzil ends with the following statement,

“No further details at this point. Lot of complicated stuff going on, just thought I'd give you guys an update”

In addition to the post, Marzil has also changed both his profile picture and the cover photo which previously contained Signify branding.

This is suggestive enough to speculate that something is up between Signify CS:GO and Marzil. Also, Signify registering for the ESL One Cologne 2019 - Asia Open Qualifier #2 and ESL India Premiership 2019 - Summer Season with a new line-up could mean that the organization has already picked up a new team for the next two months or so. 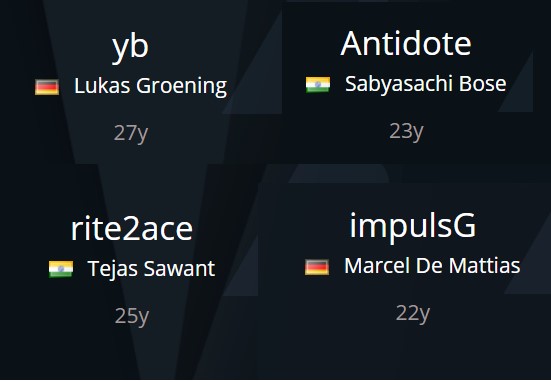 At the time of writing this, no official statement has been made by the organization or the players. If we were to take a guess, it seems like Marzil is one the verge of either parting ways with or being benched by Signify CS:GO while crazyguy has possibly left the team to make space for the new German player, Marcel ‘impulsG’ De Mattias.

Note: Marzil's stack Tempus Troupe went up against Signify CS:GO in the opening round of ESL One Cologne 2019 - Asia Open Qualifier #2 today. According to the scoreboard on ESEA, it seemed like a close match with the Signify emerging victorious.