Chicago witnessed a great playoff take place between the final four contenders yesterday with Liquid and ENCE making it to the Finals after defeating Vitality and MIBR in an action-filled Saturday. 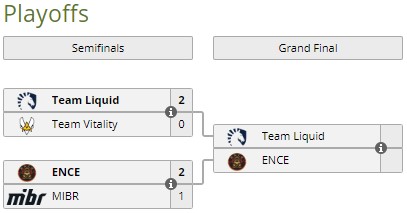 Finns To The Finale

What started out as a really great series for MIBR turned out to be a dream in the end, as ENCE after facing a tough game against the Brazilians on Mirage came back in the next two maps to make it through by a series score of ‘2-1’.

MIBR on their own map pick Mirage were brutal and for a moment it looked as the Brazilians might just take the series from ENCE. FalleN lead the charge for his side along with fer as the two went full beast mode on the Finna, securing 24 & 26 kills respectively to claim the map in their favour.

ENCE were surely hit hard but with their map pick left they were confident enough to equalise the series which they did quite comfortably. Taking train by a score of ‘16-5’ the two teams entered the decider on Dust 2, which ones again observed ENCE dominating the Brazilian squad.

They continued their relentless onslaught to storm through MIBR, winning the game by a score of ‘16-7’ and taking the series.

On the other end, the Liquid chants filled the stadium as the home favourites took down the French Juggernauts in back-to-back games to secure a spot in the finals.

Vitality was good but not enough so as to defeat Liquid. Vitality went ahead and picked Dust 2 against Liquid, though VItality is really good on the map, Liquid have consistently shown that they can be a force to reckon with on the map, may Nuke would have worked better for the Frenchmen, as they went down ‘16-11’ to give advantage to Liquid.

The boys in blue hit Vitality hard on Overpass, despite it being a CT-sided map Liquid were able to gain a fairly big advantage playing T-side, leading to another comfortable victory for the NA squad. Securing the series ‘2-0’, Liquid secured their spot alongside ENCE in the finals.

We went backstage with @ATT to talk to @NAFFLY as @TeamLiquid claim their spot in the #IEM Chicago grand finals. #ATTvip pic.twitter.com/AH65dv3sel

With this, we come across another great final set up for us as ENCE go up again Liquid. The two previously met in the finals of DreamHack Masters Dallas 2019 last month where Liquid ran away with a victory. Let’s see if ENCE claim their revenge or fall short of victory yet again.