Liquid to go up against Vitality in the finals of ESL One: Cologne 2019

The second day of the playoffs was as intense as it gets when four big teams clash head-to-head in a bid to make it to the finals of an event which is being played out in front of a completely sold out stadium.

Vitality and Liquid were the ones who attained victory in front of this fabulous and passionate crowd. Both the teams played an amazing three-game series against Astalis & Na’Vi, respectively, to make their way onto the finals of the unofficial major of the year, ESL One: Cologne 2019.


Astralis faces the wrath of Zywoo

The young star of the team, Zywoo, who S1mple has praised as being the closest competitor to him in the international circuit, once again stood-out to be the best player for his side. As the French squad took down the Danes by a series score of ‘2-1’.

Astralis just couldn’t hold back Vitality on Dust 2. The Frenchmen were just too dominant on their map pick winning eleven rounds in the first half playing T-sided and then holding down the sites air-tight, preventing Astralis from any sort of a comeback.

Though Astralis are known to be one of the best teams on Inferno, with plenty of different strats and precise map breakdown, they had a mighty difficult time against Vitality today. Though Zywoo led the charge for his side, it was RpK who was the saving grace for his team on many occasions, managing to take the match into double overtime before Astralis could finally convert it into a victory for themselves.

The decider was played on Overpass and though the first half was a close affair, once Vitality started playing CT-sided, there was no stopping them as they stormed through the rounds one after the other to secure the map and take the series ‘2-1’.

With the victory Vitality became the first team to make it to the finals of ESL One: Cologne 2019, while Astralis who played so well in the tournament were knocked out without facing their main rivals, Team Liquid. 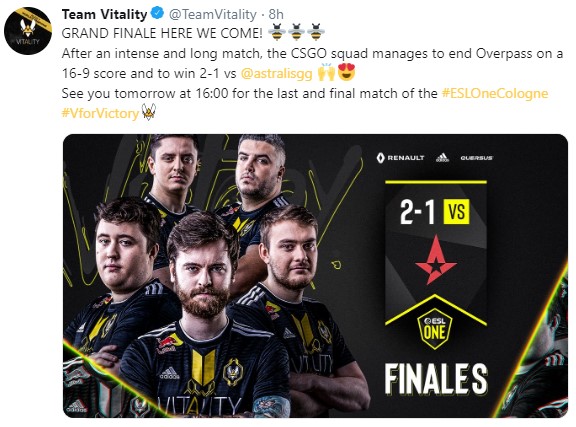 Liquid - Truly the best in the world

As per Stewie2k’s statement before the match which said something along the lines of, ‘Na’Vi might have the best player in the world but I am a part of the best team’, it surely was the defining factor for today's clash between the two teams.

Na’Vi off to a fantastic start were not able to take a lead in the first half as Liquid turned it around on them with their precise and methodical approach. With hope of making a comeback playing T-sided in second half, the last glimmer of hope for Na’Vi was taken away from them when Liquid did not let them run away with the rounds, breaking their economy every now and then, to slowly but surely secure the map.

The second match took place on Liquid’s backyard, Overpass. A map on which Na’Vi had previously defeated Liquid in the group stage. After the first half Na’Vi were able to secure a small lead and it felt as if the CIS team might just do it. Attaining a solid start in the second half it was as good as it could get for Na’Vi but NAF took it upon himself carrying Liquid through, as the boys in blue made a miraculous comeback, winning 10 rounds in a row to close the map and move on to the finals.

"Just another trophy, that's the big thing. That's all we aim for, all I am for." - @NAFFLY ahead of the #ESLOne Cologne Grand Finals tomorrow! pic.twitter.com/s9navdwXYK

With this the ESL One: Cologne 2019 has almost come to an end with the finals left to be played out between Team Liquid and Vitality. Let’s see if Vitality walks away as the champions of Cologne and some extra cash or does Liquid successfully acquire two trophies with one victory.