It’s rare to encounter a Dota player who has not dreamt of going pro and while many have realised that they may not be cut out for the job, you can’t stop a Dota player from dreaming. But reaching the big leagues doesn’t happen randomly. It’s not chance or lady luck or an act of god that makes you wake up one day with the reflexes of Miracle, the laning of Sumail and the decision making of Ana. Being a good player is about hard work, grinding, learning and above all, being smart.

While MMR and medal may never be the truest indicator of where you stand, it does provide a well enough indicator. But just because you aren’t on the leaderboards yet, doesn’t mean you can’t get a taste of the competition right? For 15 seasons, the JDL has been bringing a competitive spirit to Dota communities across the world, allowing players from all tiers to experience the competitive side of things. It’s tiered structure and ability to climb tiers, season after season, is what makes it such a successful and wholesome tournament. The signups for season 15 are now open and if you want a dose of real competition, here’s how and why you should sign up.


Leaving the Premier Division aside, the JDL is the perfect opportunity for aspiring teams and orgs to learn. The league format allows teams to be a bit risky and open with their playstyles and to learn and adapt with each passing game. Reachable goals and realistic targets, make playing in the JDL truly worthwhile and it can be a great way for new rosters to test the waters or for existing ones to try and improve upon their mistakes.

On top of it all, there is the Premier Division, where the best teams in each region compete for a prize pool of 4000$ per region.


Barring the Premier Division, the JDL has entirely revamped their league system from Division 2 onwards to try and rectify recurring problems of the past. The Premier Division will still feature 5 teams in two groups with the top 2 in each advancing to the playoffs. The bottom-placed team in each group is relegated to Division 2 for the next season while the 4th placed teams will enter a playoff to with top placing teams in Division 2 to determine who gets a slot in the Premier League in the next Season.

From Division 2 onwards, the format has been completely revamped with the round robin groups not being in effect anymore. The Divisions will now have subdivisions and phases. Each Division will be played out in 4 phases - 0,1,2 and 3 with the 0th phase used for calibration. Each Division will also have sub-divisions in the form of Upper, Middle and Lower. 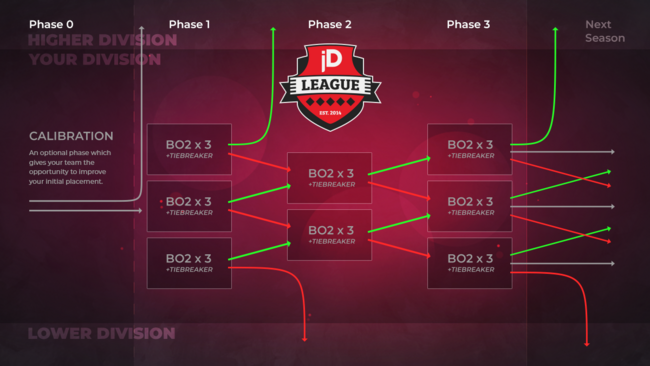 Teams will be seeded into either Upper, Middle or Lower in Phase 1 and will have the opportunity to climb or be demoted as per their performance in the subsequent seasons. Each subdivision will be a group of 4 teams with teams playing a round-robin draw + tiebreakers across 4 weeks. Only teams in the Upper subdivision at the start of Phase 3 will get a chance to qualify to the next Division for the next season.

A more comprehensive explanation of the new format can be found here.