Day-5 of IEM Shanghai 2018 started off with NRG taking on Gambit in the second ‘Round of Four’ match.

The winner of this BO-3 series will move onto the finals where they would be pitched against TyLoo while the other will be knocked out of the tournament. 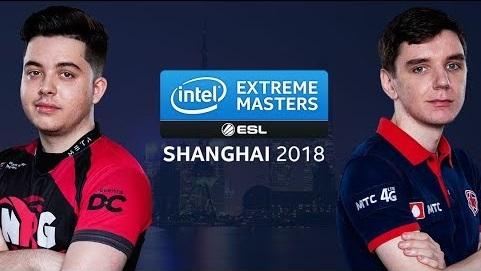 The first match of the series took place on Gambit’s map pick, Train. The pistol round saw NRG opening big with a triple-kill by ‘Cerq’, followed by a quad-kill in the next round from ‘FugLy’. Gambit equalized the score but some tight defensive plays from NRG won them five rounds in a row to take the score ‘7-2’ in their favour.

Gambit tried to catch-up to NRG but couldn’t close down on the gap with the score reading ‘9-6’ at halftime. NRG came in all guns blazing winning the second pistol round and followed up by taking the anti-eco rounds as well. Gambit tried to come back but NRG exploited their loose defensive plays to win the game with a score of ’16-8’, taking the lead ‘1-0’ in the BO-3 series.

The second match was played on Overpass, NRG’s pick. The pistol round went in favour of the Americans playing T-sided, winning the next 2 rounds as well. Gambit took their first for the half in the fourth round only to get stomped by a gigantic 8 round streak from NRG.  The half ended with NRG’s massive lead of ’12-3’.

NRG opened the second half winning 4 consecutive rounds to take the match ’16-3’ and the series ‘2-0’ dealing a crushing blow to the CIS team. Winning the second semifinals NRG proceeds to the finale where they will face TyLoo in a BO-3 series.

Day-5 of the tournament ended with an ecstatic NRG as they bested Gambit ‘2-0’ quite easily in a BO-3 series to move onto the finals.

The last day of the tournament will witness a clash between ‘The American Powerhouse-NRG’ and ‘The Pioneers of Chinese CS:GO-TyLoo’ as they fight it out in BO-3 series to win the coveted ‘IEM Shanghai 2018’ along with a cash prize of ‘1,25,000’ USD. Stay tuned to find out who wins it big tomorrow on   Day-6 update of the tournament.