In conversation with Venom

27th, Jan, 2018
Venom has been a role model to the Indian CS community for a long time now. He may not be the flashiest player on the server always, but the way he carries himself and the love and respect he has managed to earn for himself is truly a feat worth noting. As a community figure he has it all; the charm, the respect, the words and of course the presence. Not one to be embroiled in too many controversies or ‘drama’, Venom uses his traits to inspire, educate and spread awareness about esports.

He’s the captain and part owner of one of India’s most prominent esports teams, Team Brutality and also the captain of the Marksmen at U Cypher. Currently they are the table toppers in the league as well. The ideal candidate for a packaged televised format such as U Cypher, Venom oozes confidence and is quite comfortable in front of the camera. Here we are in conversation with Ankit ‘Venom’ Panth

Hi Ankit. How are you doing? Your team is doing pretty well at U Cypher! It must be a great feeling.

Venom: Hey Shounak, I am doing good, thanks for asking. I am glad to see that things are working in our favor and boys are having fun. Its been a great learning for me as well to lead a team across 3 games. In Marksmen the friendship, bonding and chemistry are doing the trick. We all are always there for each other. 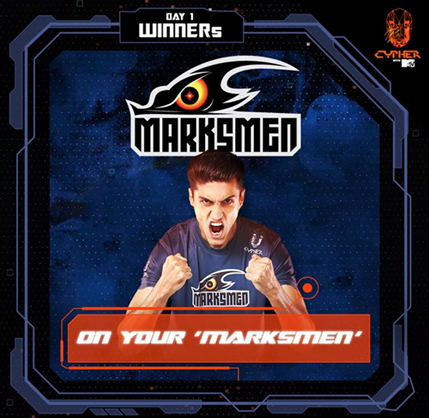 What's been the experience like playing on the set at U Cypher? How is it different from playing in a LAN?

Venom: The experience has been amazing. Initially there were few technical, scheduling and production issues but later on everything went smoothly. They took good care of gamers on the set and also made sure that the production team knew that we are not actors but gamers so they have to be patient while shooting with us. At times there would be retakes because people were actually scared seeing this type of enviornment with so many cameras and people around just watching you talk and play. Even I was nervous on my first day but eventually I got use to it. I am happy that I could take my experience from modelling, ESL photoshoots, interviews etc which we do before our games during lan tournaments and use them here. I still remember once telling Mr. Gautam from Nodwin Gaming that why have you put a camera right next to my face while I am playing and he replied I am just getting you ready for the future my boy, haha. What I did miss was the crowd cheering that happens during lans. It gives me a massive boost when someone shouts V3nom or Brutality while we are on that big stage. These days its a bit difficult to hear that as we have to wear noise cancellation headsets but it helps. Other than this I think everything was almost there in UCypher, the pressure, competition and aggression could be seen during the championship.

How have you been motivating your team? It must be especially nerving for them because being in front of the camera adds a lot of pressure

Venom: Well, that was kind of easy for me once they started respecting me as a captain and believed in me. When the bidding was complete I was thinking what if these guys don't see me as their captain, then it would be very difficult to manage. I remember after the auction process I met all of them and we had a chat. I wanted to see what was everyone thinking and how do they want to approach this opportunity. The good thing with me is once I talk with someone for few minutes I get to know what exactly he wants and that always helps me to make the person understand better. In this case I did the same and got the team together and showed them our one common goal which was to lift the UCypher trophy. I made them realise that this is a very big opportunity for us, especially the young one's who have just jumped into this. I told them this is not your normal tournament. We will be on TELEVISION and  that in itself is a very big thing and could open a lot of doors of opportunites. We have worked very hard to reach here and now its upto us how we take it forward. Whenever they felt shy or had some doubts I was always there to guide them as I have been doing this for almost 10 years now with Brutality. Till the time you trust your team and are together with one single motive, nothing can go wrong.

What do you think is going to be the key to victory in a long drawn out format like U Cypher?

Venom: I would say your team bonding, chemistry with each other and like minded thinking. If you have these 3 and know how to control situations then you will be able to take this home. The problem is you have 14 guys in your team who don't know you that well so for them to trust you is going to take sometime. But if in between that trust breaks then by the time you try gaining it back, it will be too late. All 14 people cannot be the same so you have to be very careful while being in charge. You have the power being the captain but that doesn't mean you can misuse it. In my case whoever plays under me is like my family and I make sure that he is comfortable. The results are always secondary for me. What matters to me is that the guy playing with me should be happy and enjoy the game without pressure. I don't doubt the calibre of my players ever, if they are playing here with me that means they are talented and have worked hard to get here. This format requires everyone to be on the same page because every point will matter and if somehow that changes in anyones mind in between, then your downfall will begin.

What was your strategy while drafting the team? On a scale of 1 to 10, rate how happy are you with your team selection!

Venom: My strategy while drafting was similar to that of Brutality. I always pick players who are hard working, confident, passionate and love what they do. Players who know how to respect everyone and be humble. These are the core qualities that are required to be a BRUTAL! I would rate my team selection 8 out of 10.

It seems like most of the captains have gone with people they are comfortable playing with or have played with over a long time instead of a set strategy or role. For example, you have Rix, Kappa has taken Manan and Mithil, Wuzz and Pexxer are in one team etc. Playing with friends who are like family is something you have emphasized on even in Brutality. Thoughts?

Venom: As I have said this many times that for a long run I will only play with players who I personally know and I am comfortable with. The reason is pretty simple, if I dont trust you, I wont waste my time and efforts because once we form a team it stays for a long time unless someone does something really bad. Brutality is a family and not a team, you can even see that reflect in our fans. I don't mind people playing bad in my team till the time you are accepting your mistakes and working towards them. I just want to see the effort, thats it. Its a game after all, you will win some, you will lose some. But if I see you putting blames or creating fights within the team, you are immediately out.  While picking my cs squad for Marksmen I had a stategy in place. I knew I had to get RiX but with limited points and that's what I did. After the auctioner announced sold to Marksmen, I was so happy because that's where I had already won 50 percent of UCypher in my head. We share a bond so strong that no one else can ever understand. Playing with people who you trust is what makes this game intresting for me. After I had got him my next plan was to pick players who are not that recognised but very talented because I wanted to use this platform to give those faces a chance to prove themselves.

Venom: You cant make everyone happy in this world, can you? This is just the first season so give it some time to sink in. Such behaviour is always expected when you don't know the reality. Its a televised gaming show and not a professional esports tournament, I don't get it how can you even compare? I have got hundreds of messages to say something about this and clear the confusion. I will soon do a video on this and upload it on my Faceboook page and tell the people who want my opinion on this that how has it helped me and what can we expect in future. So you will have to wait a little longer to know my take on this.

You have built yourself and Brutality to be a very marketable and monetizable product which many people lack in the industry. While success in the game can never be assured, building an image or a brand will always be a valuable skillset to have. Do you feel U Cypher helps you in your endeavours and if so how?

Venom: Thank you for the compliment. Absolutely, you have no idea about the deals that I am getting these days just because of UCypher. Once everything is confirmed and  I sign it, I will announce it on my social media accounts so that people who follow me get an idea about the transition that has happened.

Thanks for taking out the time to talk to us! We hope the U Cypher season is extremely successful for you and your team and also wish you all the best for 2018 with Brutality and your new roster!

Venom: You're most welcome. Its always a pleasure talking to AFK Gaming. The roster announcement will happen soon, do keep an eye on our social media handles.
About UsContact UsServicesRSS
DisclaimerAdvertise With UsArchiveEditorial Team