With already a few changes being implemented by the organizers of StarSeries i-League Season 7 after a couple of teams backed out of the event due to certain problems with their rosters, another one makes its way as GuardiaN from FaZe Clan will not be able to attend the first day of the event due to Visa issues.

FaZe has been matched up against Pain Gaming on the opening day of the event. With GuardiaN joining the team on the second day, teams coach, Janko ‘YNk’ Paunovi? will be taking his place.

The absence of the talented AWPer is a big blow for FaZe as this might lead to a shaky start for the heavily talented side.

NRG’s star player CeRq was also on the leash with a risk of missing out on the entire event itself but announced his arrival on Wednesday after his application was accepted by the Chinese authorities. 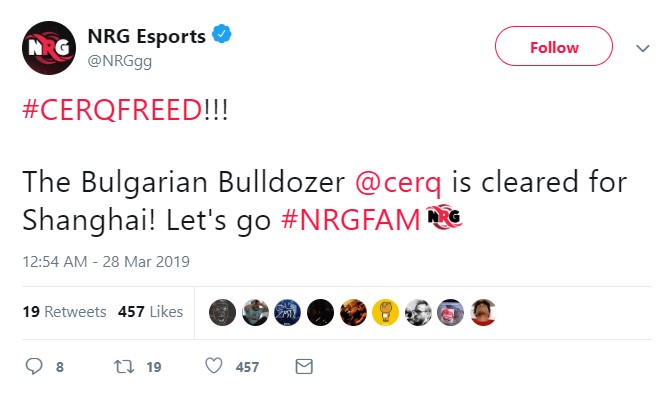 The event seems to be missing out on two teams Rogue and HellRaisers, although both of them were quickly replaced by an alternate team, it still shines a bad light on the event, though the organizers were not at fault in both the cases.

China seems to be supporting esports by declaring it as a legit profession and also promoting its growth by hosting multiple events along with the highly celebrated annual mega event, WESG, but the same is not being reflected when it comes to their Visa procedures.

This is not the only event that has several players facing rebuttal by the Chinese authorities, it was a common instance during the WESG 2018 - Global Finals as well. Now there is no evidence to point out that the Chinese authorities are at fault but if the same issue is being faced by multiple foreign organizations and players then it is easier to assume where the fingers might be pointed towards.

Hope this can be taken up by the concerned authorities so that events in the future are not plagued by such issues and that China can continue to flourish as the hub of esports for the Eastern audiences.

Stay tuned as the event is all set to start tomorrow onwards in Shanghai.