The first day of the Payoffs of the Asia Minor Championship 2019 came to an end today with the obvious teams, Tyloo and Grayhound moving forward to face each other in the winners final tomorrow. 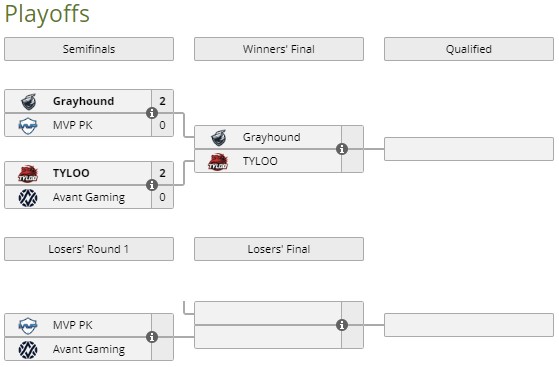 Both the teams comfortably took down their opponents Avant and MVP PK in straight ‘2-0’ sets to finally square off against each other.

Grayhound hammered MVP PK on both Mirage and Dust 2 to secure a dominating ‘2-0’ victory. After beating the Koreans on their own map pick, Mirage, the hounds moved on to destroy them on Dust 2, giving away just four rounds before taking the win and moving on the winners final.

On the other hand, Tyloo was powerful as ever beating the other Australian team present in the playoffs, Avant. It was game over for the Aussies as soon as they lost ‘16-2’ on their map pick, Overpass. They were brutally outplayed proceeding on to play Mirage.

Though Avant came back stronger in the second map it was not enough to defeat Tyloo who continued on with their momentum to secure a second victory and move on to face Grayhound in the winners final.

With this, we come to the end of the first day of the playoffs which played out as expected. With almost everyone favouring Grayhound over Tyloo, the Asian supporters beg to differ. Let’s see which one of the two makes it through to the major tomorrow.