The Asian Development League has been going on in full swing almost reaching the end of its third week since it started back on 24th October with its Main Event that features a round robin format where every team has to play a BO3 series with every other team.

The update includes all the action that took place in the last week from 3rd November until today 8th November. During this period a lot of changes has taken place on the points table some of the most important ones are as follows:

GOSU Settles Above All

GOSU has shot to the very top of the points table after winning all the 5 matches that the team played in the past 6 days. They were able to defend against powerhouses such as TyLoo and Scarz Absolute while hunting down the teams that were already struggling pretty easily.

Ehome, BTRG & TyLoo went down to a score of ‘2-0’ against the might of GOSU who are performing like beasts in the following league and have continued to raise the standard of their performance constantly a bit by bit with the passing of every match

@GOSU_gg CS:GO defeated #BTRG 2:0 (de_mirage 16:13 , de_overpass 16:10) in Main Stage Round 9 of Asian Development League ! We are still now recording first place at ADL ! and our next ADL match not confirm schedules yet. always thanks for your support ! pic.twitter.com/lHywsQnrGc

5Power started their journey in the Main Event pretty late. Not playing a single match in the first week, they played 5 matches since 3rd November.

They faired okay winning three out of the five match-ups that they engaged in. Losing to GOSU was not a big deal considering the formidable form they are in at the moment but a loss against TNC was surely not expected.

They took down both BTRG and Ehome who seem to be struggling the most at the moment while also taking down B.O.O.T-d[S], who had started off really well but have fizzled out since. Holding their spot in the top four 5Power are maintaining a tight grip to stay above the margin.

Playing four more matches this week, Ehome is almost on the brink of getting knocked out of the tournament as they find themselves in the bottom half of the points table.

Ehome has had a disappointing run since the ending of the past week as they managed to clinch only one victory while losing out on the other three matches. They won against Scarz Absolute in one hell of a game that saw new life being breathed into a crumbling Ehome but it was all a ruse as they went on to lose out against GOSU and 5Power.

Scarz Limping Towards The Top

Scarz Absolute has lost most of their matches in the third week so far. Winning a single game against BTRG.IMBA while losing out to the likes of CyberZen followed by GOSU and Ehome.

The loss against CyberZen could still be justified considering the way those guys are performing right now is at their absolute best. The next three games were a poor reflection of Scarz Absolute’s potential at the moment as they won some matches with terrific plays being executed all over the map to some downright sloppy performances.

They need to bring more consistency in their games and try to take down opponents in a more convincing manner.

After playing the opening match of the Main Event against BTRG.IMBA and owning them with a ‘2-0’ win, the top team from Asia had disappeared for quite some time and were witnessed again on 7th & 8th  November playing two matches on each of these days.

TyLoo broke even on both the days winning and losing a game each on both the days. TyLoo seemed to falter in front of GOSU while threw a potential win against TNC, by being a bit arrogant and overly confident with their rushes.

The win came against Flash Gaming and B.O.O.T-d[S] both of whom were defeated by a series score of ‘2-0’. TyLoo maybe at the bottom of the table at the moment but they have quite some matches left to be played out which can surely see them rise in rankings and stay true to their title of being Asia’s best.

The points table at the end of the day is as follows: 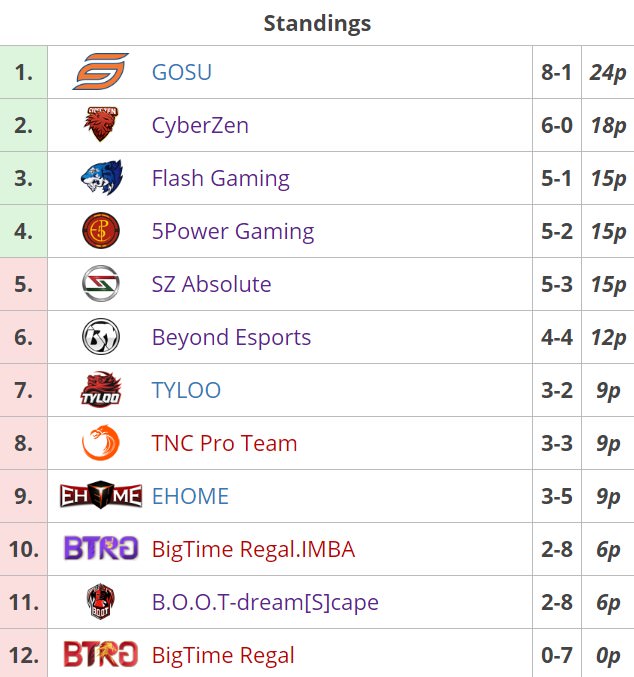