The Playoffs of ECS Season 7 is all set to kick off today with NRG & FURIA making their way through Group-A to take on Vitality & North from Group-B. The two days of Group Stage action has seen a lot of unexpected results and the Playoffs bracket look a bit different then what most would have predicted.

This is how the groups look at the end of it all, 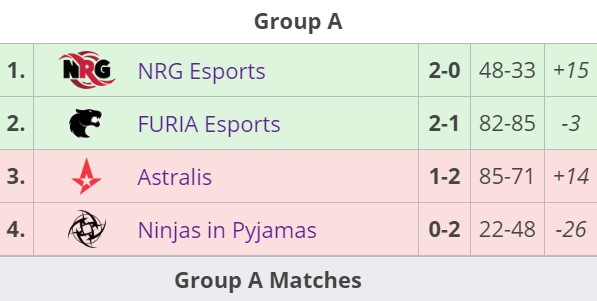 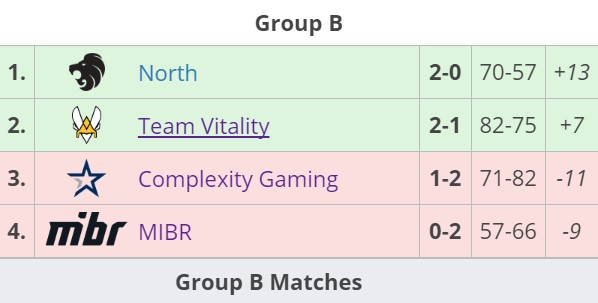 With Astralis not qualifying from Group-A and MIBR also not qualifying through Group-B, this turned out to be quite an exciting Group Stage. The biggest upset was Astralis losing both its match-ups against the young Brazilian squad, FURIA.

Fast And The FURIA

FURIA might not be the strongest team present but they were doing everything right in order to defeat Astralis. After defeating them in the opening game of the tournament, many speculated it to be a one-time thing as it was one match series. 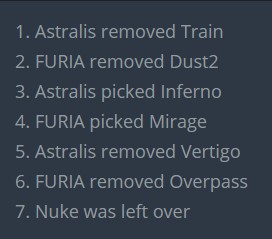 But yesterday FURIA sealed the deal by taking a three-match series off their hands. The series started off with Astralis wining on Inferno which was followed by FURIA equalising the series by winning on their own map, Mirage.

This set the stage once again for the two to clash on Nuke. Last time the Brazilian squad had caught Astralis off guard with their aggression and pace which led most to believe that this time around the king of nukes will be well prepared but FURIA were able to walk away as victors yet again.

Once again Astralis were not able to celebrate a good CT-side on the contrary FURIA did a fantastic job as they won seven rounds in a row to ensure their victory. It was the game-changing moment which helped them gain a lead on the opposition while also putting them under pressure. 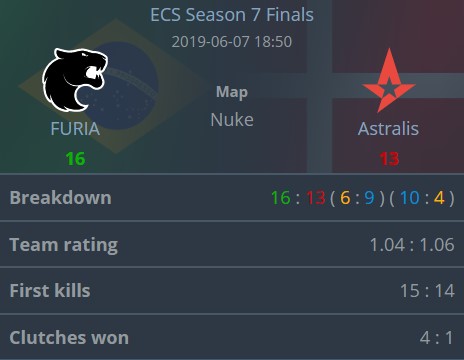 With this victory, FURIA qualified for the Playoffs while also ensuring them as the next Brazilian represent. MIBR has not been looking good and their early elimination from the event has shifted a lot of focus towards FURIA.

Vitality after taking down complexity in the Group-B opening match went down to North in their second match but ensured a slot in the Playoffs by defeating complexity for the second time.

North & NRG both went on to top their groups and seem to be in top form. NRG took a clean victory against FURIA, so maybe there is a way to deal with the shifty side. While North also taking down Vitality will be acting as a great boost to their morale and confidence.

Let’s see how the teams perform today on the first day of the Playoffs. Which teams do you guys think will be moving on to face off in the finals?