Flow, Beyond, Nexus & HAVU qualify to the Semifinals of IeSF World Championship 2018

The IeSF World Championship 2018 continued on with the Playoffs which were followed by the Group Stage that took place yesterday, witnessing the top two teams from each group making it to the Round of 16.

The Round of 16 observed 8 of the qualifying teams departing from the Championships while the other 8 moved on to play in the Quarterfinals. Following teams made it past the Round of 16:

This is how the Quarterfinals proceeded to witness the elimination of 4 teams from the Championship while the other 4 moved on to play in the Semifinals: 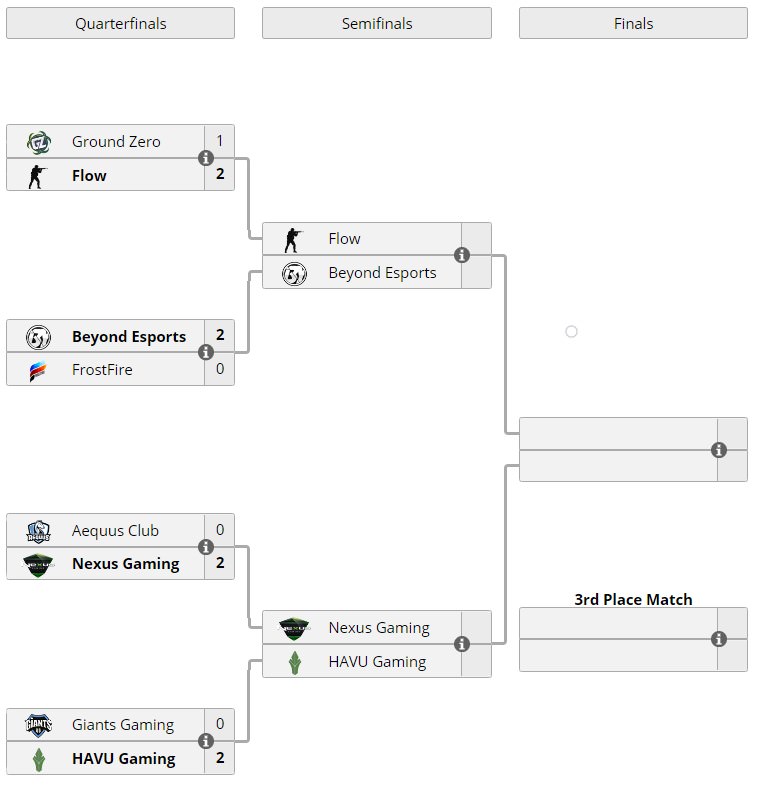 Flow proved that they are a team that is here to win and it was not a fluke against SZ Absolute but pure dedication and determination. Taking down Australia, being represented by Ground Zero Gaming on Cache and Inferno with scores of ‘16-11’ and ‘16-2’, respectively.

Flow did lose their first encounter against the Aussies on Mirage with scores of ‘16-9’ but did a wonderful job making their way back into the game and finally demolished Ground Zero in the decider which was enough to send a loud message across to the other teams, as they made their way into the Semifinals.

Beyond found themselves in another regional derby against the Malaysian representatives FrostFire after defeating Philippines in the Round of 16.

FrostFire put up a really pathetic performance against Beyond who dismissed the Malaysian squad from the Championship after winning consecutive matches on Dust 2 and Mirage with scores of ‘16-4’ & ‘16-1’, respectively. Such overwhelming performance could be an indication towards how well Beyond could read FrostFire due to being constant local adversaries since quite a long time now.

Aequus did put up quite a performance in their first match against Nexus on Inferno, managing to take the lead in the first half playing T-side but lost their grip as Nexus retaliated in the latter half to attain victory by a score of ‘16-11’.

The following match on Mirage was a single-sided washout for Aequus who could not keep up with the mounting pressure of breaking Nexus’s momentum who took the win with a score of ‘16-5’, knocking out Aequus from the Championship while proceeding on to the Semifinals.

Portugal put up a disappointing performance against Finland, losing in two heavily one-sided matches that barely witnessed Giants executing a proper play that was not shut down or countered by HAVU.

Giants journey in the championships came to an end after they were defeated on Nuke and Overpass by scores of ‘16-2’ and ‘16-4’, respectively.

The Semifinals followed by the Finals will be broadcasted tomorrow live at: