Five of the biggest THROWS in competitive Dota 2

Matchmaking and pub games in Dota are notorious for players throwing but we rarely see actual throws in a game of competitive Dota. BOOM ID’s recent gg call against Team Team at the Bucharest Minor was a prime example of an unintentional throw and it reminded us of some infamous games in the past which were only made famous by the magnitude of the sheer throw by a team. Here’s our list of the top 5:


DK came into TI4 as one of the heavy favourites, boasting a star-studded line up involving legends like Burning, Mushi, iceiceice, MMY and Lanm. An early 2-0 loss to EG put them into the lower bracket, something they might not have been expecting that early in the playoffs. They faced up against fellow countrymen, LGD Gaming in a fight to stay in the tournament. DK started off well in game 1 finding a fair few kills and amassing a net worth lead of 20k by the 50-minute mark. It was especially big, considering that LGD were the ones who had an Alchemist. DK found themselves up 2 lanes of barracks before they decided that it had been way too simple. A dieback on Mushi’s TA gave LGD the opening they needed and with a Lycan in the field, there was little DK could do without their primary damage source, other than watch their throne fall. DK would go on to win the series but their throw in game 1 was one of epic proportions that is surely one worth remembering.


Sometimes it takes a 20k lead and 40 minutes to start throwing. In other times, just the draft is enough. At TI5, C9 went up against Chinese org, Vici Gaming in the lower bracket. Game 1 was extremely close, but Hao’s Spectre gave VG the edge in the hour-long matchup. With their tournament life on the line, it was expected that C9 would pull out their big guns in game 2 but the draft that followed left everyone stunned. Bone7 and his C9 side drafted a lineup with 0 stuns going for strong laners such as the SF, QoP and Bloodseeker instead. Vici had no trouble, going instead for heroes who can draw even in the laning phase and then exploded in the mid-game behind Hao’s Gyrocopter. There were literally 0 ways for C9 to lockdown the Super’s Sniper, who just sat in the back and right clicked away to glory. Cloud 9 looked badly out of place in teamfights and the game lasted only 30 minutes before VG forced out the gg. 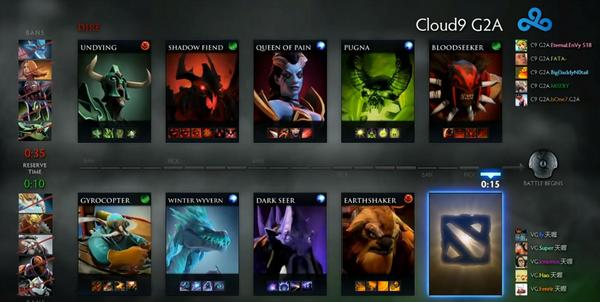 
We can’t list out throws in competitive Dota without throwing it back to this classic, a game that involves the same C9 lineup as the last throw. EE and co took on tournament favorites, Team Secret in the lower bracket of the Dota 2 Asia Championships in 2015. After catching them out with an Io+Tiny draft in game 1, C9 looked set to take the win in the series after starting off well in game 2. Secret were unable to take the fights and relied on Zai’s Enigma too heavily to fight as a team. C9 abused this to build themselves up a lead as they ran down mid at around 40-minutes in. A quick jump by bone7’s Axe saw Secret down to a 4v5. At this point it seemed unlikely that they would be able to hold onto their raxes and both Arteezy and s4 pushed out the sidelanes. Teleporting back to defend and then making a gg push would have been a relatively safe play for C9 but unfortunately for some reason, none of their heroes had TPs and you could see the panic set in as the C9 players couldn’t decide whether to walk back or to continue sieging! By the time, the decision was made, Arteezy was already through with the tier 3 and moved straight for the tier 4s. Bone7 decided to sacrifice himself to the enemy fountain and then buyback but forgot that he had the Aegis. The rest of the C9 never made it back on time as Arteezy’s and s4 lay waste to the throne in a matter of seconds as casters and audiences watched in awe as Cloud9 threw a nearly unthrowable game of Dota. C9 went on to lose the series, adding salt to their wounds.

In second spot is a play that almost cannot be forgiven, denying SEA their shot at a TI grand final. Game 3 of the lower bracket finals of TI3 saw Na’Vi put in an uncomfortable position against Orange Esports. Mushi’s OD looked quite potent against what Na’Vi had to offer and orange built up a solid 12k gold lead, putting themselves in a good position. A simple Roshan play should have resulted in Orange pulling out further ahead with an Aegis to siege high ground but a costly mistake from their offlaner meant that the Aegis was denied. And as if that wasn’t enough, Mineski started slipping soon after, as Na'Vi grew more confident by the minute as they wiped Orange thrice in 7 minutes, eventually forcing the gg. KyxY’s Aegis deny goes down as one of the costliest throws in Dota as it occurred in one of the biggest stages and most crucial matcups imaginable.


Words aren’t enough to justify BOOM ID’s decision to call the gg when they could’ve won the game but it’s still probably fresh in everyone’s mind. In any case, here’s what happened.

Don't agree with our list? Let us know which throws are the most memorable for you in the comments below ...