ORDER and MVP PK moved on from Group A of the APAC finals of the ESL Pro League Season 7 at the end of day 2. ORDER took top seed from Group A, while MVP picked up the second seed. With that’s it’s now 3 Australian teams in the playoffs and the Koreans, MVP PK.

ORDER and MVP picked up wins to start things off over Signature Gaming and last minute replacements, SZ Absolute respectively. In the WB finals ORDER managed to outclass MVP PK, taking a 2-1 victory in a close series. Both teams won their map picks, but ORDER were better on the decider, Mirage. They kicked things off on the T side, picking up 5 straight rounds before MVP could open up their account. The half ended at 11-4 for ORDER. MVP tried to make a comeback on their own T side, however, ORDER had given themselves a good enough cushion and closed it out 16-13.

In the LB, Signature Gaming, took a pretty convincing 2-0 over SZ Absolute but eventually fell to MVP PK in the LB finals. Despite an impressive series by Phoomphat ‘qqGOD’ Phodjanat, SG were just not good enough to take maps off of MVP. Good starts in both the CT and T side on Inferno saw MVP take the map 16-12. Both sides had a weak T side on Train, but a 7 round lead for MVP in the first half allowed them to pick and choose their battles as they closed out the map 16-11. 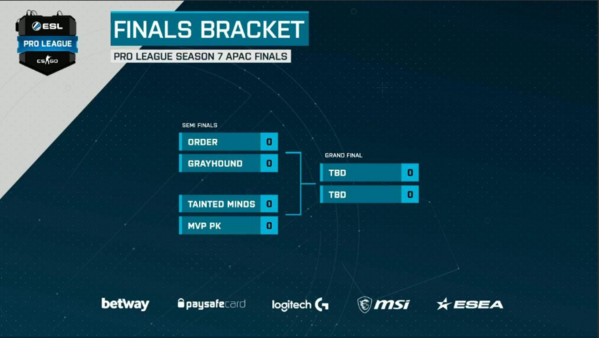 MVP PK now face Group B toppers, Tainted Minds in the playoffs, while ORDER are paired up against Grayhound Gaming.