ESL has recently announced that they will be introducing changes to the format in which the ESL Pro League’s regional qualifiers are conducted.

The world's longest running professional CS:GO league will be returning soon with its ninth season which will see the regional qualifiers being conducted as a LAN event for Europe and American regions in the form of Studio Matches, over the previously adopted Online Format. The APAC region, for now, has been exempted from this decision and will continue to see it's regional qualifiers being conducted online.

The decision has come after ESL and the participating teams communicated with WESA (World Esports Association) about the online matches being taxing on the teams, as a great number of online matches were stacked together in a short span of time while also making it quite problematic to properly manage a team's schedule. 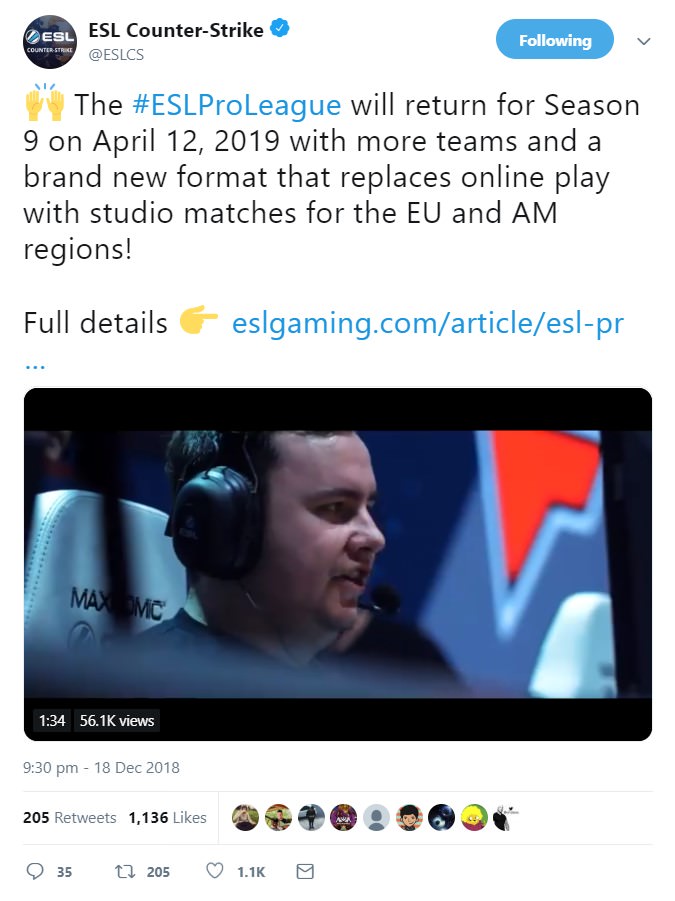 The new format will witness all the three regions: Americas, Europe and APAC witnessing participation from a total of 16 teams which will be divided into 4 groups of 4 teams each, depending upon their ESL World Rankings.

This is how the regional qualifiers will proceed:

Out of the 4 groups consisting of 4 teams each, 3 groups will be reserved for the NA teams while 1 group will consist of LATAM (Latin America) teams.

The winner from each group will directly qualify onto the Finals whereas the second and third placed teams will move on to compete again in Round – 2.

Round – 2 will consist of 2 groups of 4 teams each. The winner from each group will also qualify for the Finals.

The Finals will observe a total of 6 teams competing in it.

It will consist of 4 groups of 4 teams each and the group winner from every group will directly qualify onto the Finals. The second and the third-placed teams will move onto Round – 2.

The second round will witness the group winners along with the second placed teams also making it to the finals.

The Finals will observe a total of 8 teams competing in it.

Out of the 4 groups consisting of 4 teams each, 2 groups are reserved for ANZ teams while 1 group each for China and SEA teams.

The group winners along with the second placed teams move on to the second round. The second round will consist of two groups, one consisting of ANZ teams while the other will be a combination of Chinese and SEA teams.

The group winners from the second round will qualify for the Finals.

The following format will be effective immediately starting with the upcoming ESL Pro League scheduled to take place from 12th April. This time around the regional qualifiers will be wrapped up within a duration of four weeks to keep everything exciting, short and comfortable for the teams.

Let's see how this move of changing the qualifier format works and how soon does the APAC region also acquire the same.