ESL One Birmingham will be Fnatic’s last tournament for the current DPC season and with it, their last chance to pick up some valuable DPC points. The team currently sits at the 12th position on the leaderboards, 895 points shy of the top 8. Can EternalEnvy and his gang finish the season on a high? Let’s take a look at what they are up against.


Fnatic start off in Group A, a very competitive group on paper. Their first match will be against TI5 champions, Evil Geniuses who haven’t had the best of seasons themselves. A bo1 means that the tie is rather unpredictable but Fnatic hold somewhat of an edge with Universe on their side. The offlaner has played for EG for the longest time and will be able to prove quite the insight on their opponents.

Also in Group A are current leaderboard toppers, Virtus Pro and last minute replacements, Team Spirit. The GSL style group stages, allows two teams to go through meaning that it’s quite likely that either EG or Fnatic get knocked out at the group stages itself.

In Group B, it will be Team Liquid up against the likes of OG, Vici Gaming and Pain Gaming. Group C see’s another SEA favourite Mineski, pitted against Optic Gaming, Newbee and LFY. Fortunately though, for Mushi and company, they did get the easier of the two matchups in round 1 having been pitted against LFY. 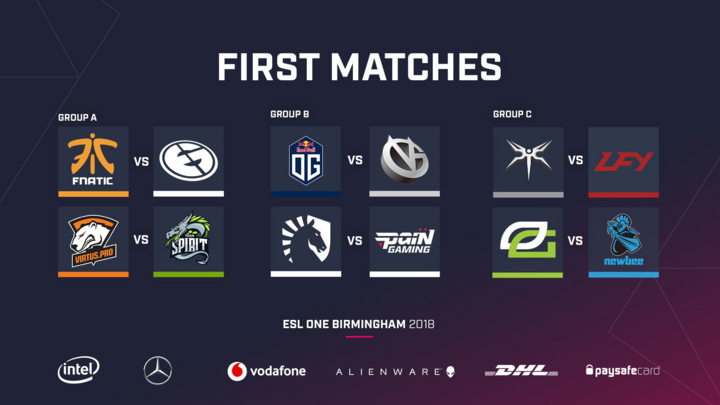 Matches to watch out for on Day 1


The EG versus Fnatic clash will be definitely an interesting one and the NA side will be gunning for revenge as they lost the same tie at the GESC Thailand Minor. OpTic versus Newbee could also be interesting but all the round 1 matches are bo1’s so we probably will not be able to learn a lot about the teams.