22nd, Dec, 2017
2017 has been a year of highs for Indian esports with huge tournaments, new champions, new organizations and a continued upward trajectory for the local scene. While it was a breakout year for 2ez gaming and their rise was quite entertaining to watch, a certain incident during the ASUS ROG Masters South Asia finals left a sour taste in everyone’s mouth. We covered the incident earlier and while there was a lot of heated discussion and debate (not instigated by me ofc) on the topic, the issue like most issues of importance in India was forgotten. 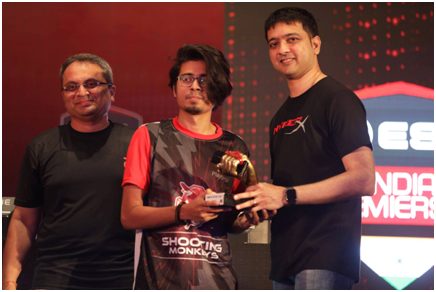 Source:ESL India
ESIC’s (Esports Integrity Coalition) statement on the incident was a big blow for f0rsaken and the Counter-Strike community as he was at the time one of the better players in the scene. However, both Nodwin and ESIC refused to comment and pursue the issue further and things looked bleak for f0rsaken. Despite being shattered by the news, f0rsaken relentlessly pursued the matter with ESIC and his persistence eventually paid off as they finally got back to him. After months of back and forth and clearing out his side of things, ESIC came to the conclusion that indeed his 2-year ban was not justified.

The full statement as released by ESIC is as follows and can be found on their website as well.

The esports Integrity Coalition (ESIC) today reduced the suspension on CS:GO professional, Nikhil “Forsaken” Kumawat from 2 years to 6 months. This means he will be free to play competitive CS:GO in ESIC Member events from 18th February 2018.

The reason for the reduction is that the player was able to persuade the Integrity Commissioner that, technically, he had never been the ownerunder Valve’s terms of Service of the relevant Stream Account (despite controlling it for a period of time) and that it had not been him that had been VAC banned or that was responsible for thebehaviour that lead to the VAC ban. He did, however, still breach Valve’s ToSby trading in Steam Accounts and this is prohibited, which is why the original sanction has not been expunged.

Integrity Commissioner, Ian Smith, said, “It is important that esports professionals and all gamers behave legally and ethically. The trade in Steam Accounts is both unethical and in breach of terms agreed between the player and Valve when the account is opened. I trust the price Forsaken has paid is a lesson to those who indulge in these practices and that they now stop doing it.”

“I started playing professionally in India near January 2017 when I was asked to join this mix team called Shooting Monkeys by my friend Swapnil. I got involved in account trading near September 2016 because of mainly 3 reasons that I needed a break from CS:GO, I needed some money during my college time and I was not completely aware of Valve’s terms of service on account selling or trading but I know that’s not an excuse to do something illegal or unethical or violating Valve’s terms of service and I must serve punishment for this.” said Forsaken when asked if he wished to add to this statement. He went on to say, “I’m glad I never stopped practicing and learning new things about this game and I will finally be able to play competitive CS:GO in near future. I’m very excited to restart my CS:GO career once I will get the opportunitymeanwhileIi’m going to practice even harder and help myself become a better player than I ever was. Finally, I want to thank everyone who stood by my side and helped me throughout this whole case, especially Anissa, Shounak, Archisman, Aks and my previous team SemperX.”

ESIC will make no further comment on this issue.

I'm super happy and excited to be able to play competitively again. I was very sad when i was informed by ESL India about the ban. I realized i made a mistake by getting involved in Steam account trading n therefore violating Valve's TOS, which was completly illegal and unethical and i must serve punishment. But getting punished for something i wasnt responsible was heartbreaking for me. I always felt i faced some harsh, hasty and unjustified decisions so i reached out to Esports Integrity Commissioner and i am glad ESIC reviewed my case thoroughly and helped me. I'm thankful to everyone who stood by my side and helped me throughout the whole case. i have been practicing and working really hard to help myself become a better player, i have lost many opportunities meanwhile but nonetheless i am looking forward to restart my CSGO career as soon as i can. I will be able to play ESL events once again after 18th feb 2018 and thus i'm officially exploring options for potential teams, looking to main entry/rifle, meanwhile i'm open for non ESL events. - Nikhil 'F0rsaken' Khumawat
About UsContact UsServicesRSS
DisclaimerAdvertise With UsArchiveEditorial Team