The ESL Pro League Season 9 - Asia Finals is finished with its second day of matches of the Southeast Asian Group. The day witnessed a doubleheader featuring the four teams take on each in a best-of-three series.

Alpha Red found victory against B.O.O.T-d[S] in a match that went down to the decider. The team from India, Entity Gaming failed to see its way through Lucid Dream. 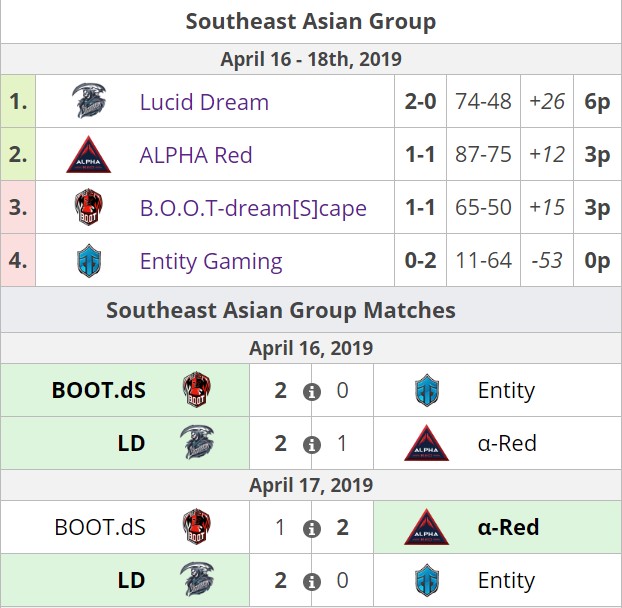 Lucid Dream continues its hot streak. The Thai organization recently qualified for the DreamHack Masters Dallas 2019 through the Asian Qualifier and they have successfully replicated that form in this qualifier as well.

They took down the in-form Alpha Red on the first day in one hell of a series that went down to the wire with Lucid Dream securing a victory for themselves. It was not an easy task as they were under tremendous pressure after dropping the first map to Alpha.

Today the team went on to defeat the Indian representatives, Entity, who were light as paper for the Thai kingpins.

Entity Gaming were competing from their temporary bootcamp in Serbia and were playing the matches at a latency of almost 300 ms. The team chose to play this through despite the circumstances. The above statement was a poor choice of words and given the circumstances, should not have been included in this article.

Lucid breezed off to an easy victory after taking Entity down on Mirage and Nuke with a score of ‘16-4’ & ‘16-3’, respectively.

B.O.O.T-d[S] on the other hand had managed an easy victory against Entity but failed to stand against the phenomenal performance put up by Alpha Red today. Today Alpha again witnessed itself to be in a crunch situation but this time around they held their nerves to come out on top and maintained their grip on the second position slot.

Alpha Red has been the highlight of ESL Pro League Season 9 - Asia. They were heavy underdogs in COBX Masters as well but went on to place second. Everyone was shocked when they defeated GrayHound while almost making their way back on Mirage against MVP PK in the Grand Finals.

They have proved it was not a one time fluke by putting up a crazy performance in this qualifier and have truly grown a lot, with a bit more practise and some knowledge on the finer elements of the sport, the team can really have an impact on the international scene.

Entity has been matched up against Alpha Red tomorrow while B.O.O.T-d[S] take on Lucid Dream. The matches will be streamed live on Twitch & YouTube, the links for which have been provided below. Stay tuned as we will be back tomorrow with an update on the ESL Pro League Season 9 - Asia.