This is all the action that took place on the second last day of the tournament, 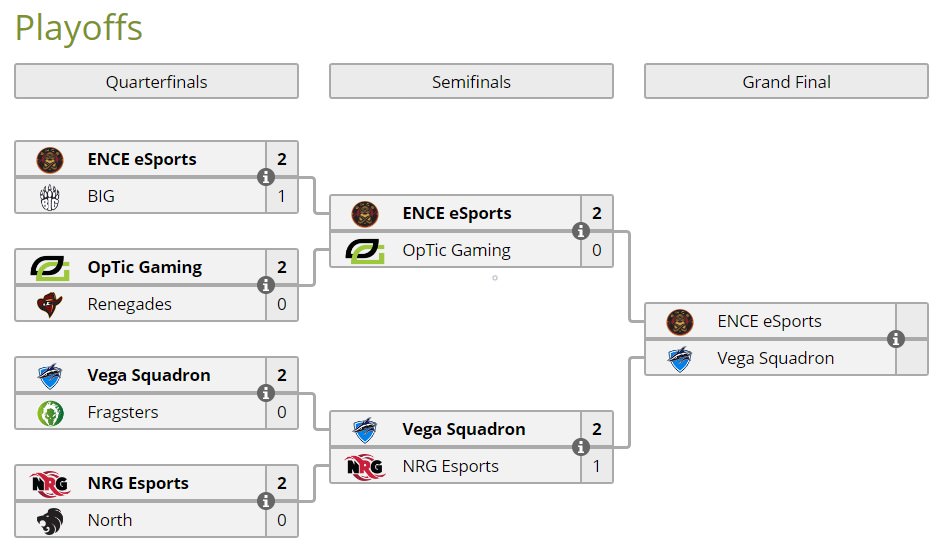 The Finnish team bulldozed OpTic off their path towards victory, taking two consecutive wins in a comfortable manner without any moment of hiccup or stress.

The first match was played on Mirage where OpTic took the lead early on in the game but ENCE retaliated strongly in the latter half with such ferocity that OpTic was able to win just one round in the entire second half losing with the score of ‘16-10’.

The second match took place on Cache where ENCE continued to dominate OpTic, who continually failed to stop this momentum gained by their opponents. OpTic bowed down to ENCE in the 23rd round crashing out of the tournament with the scoreboard reading ‘16-7’, as ENCE move on to the Grand Finale.

The BO3 series was intense and all so full of action as everything boiled down to a third match decider going the way of Vega Squadron.

The first match was held on Mirage where a Vega reigned supreme over their adversaries in the opening half of the match but an impressive comeback from NRG ensured them the first match as they hunted down the shark successfully with the scores of ‘16-14’.

The following match took place on Overpass where Vega struck hard right from the very beginning of the match but found good resistance from NRG’s side as well but the latter half witnessed Vega run away with the match as they gave nothing away to their opponents taking the match with a score of ‘16-7’.

The final decider was held on Inferno, both the teams again went toe-to-toe exchanging rounds on equal footings but NRG edged past Vega with a single rounds advantage in the first half. The second half again witnessed Vega come out on top as they took the match with a score of ‘16-12’ and won the series ‘2-1’, moving onto the grand finals to lock horns against ENCE eSports.

Stay tuned to find out which team walks away as the champions and who falters in the grand finals of StarSeries I-League 6, scheduled to take place today.