The second semifinal of the DreamHack Masters Dallas 2019 concluded with ENCE going through to the Finals to faceoff against Liquid. Following a clean ‘2-0’ victory by Liquid over FURIA, even ENCE were able to pull off two clean wins against the EU conglomerate, FaZe.

#DHMasters: We drop out as Semi-Finalists at DreamHack Masters Dallas.

The two played each other on Dust 2 followed by Train. The last map was in case of a tie was supposed to be Nuke, but the matter was taken care of in the first two matches itself. This is how it all went down, 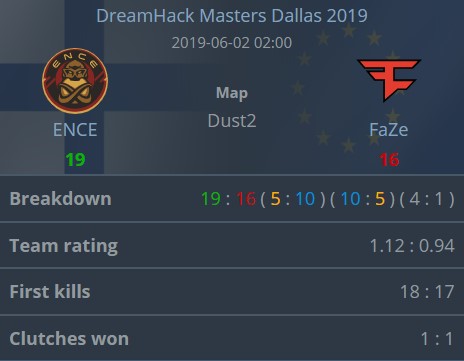 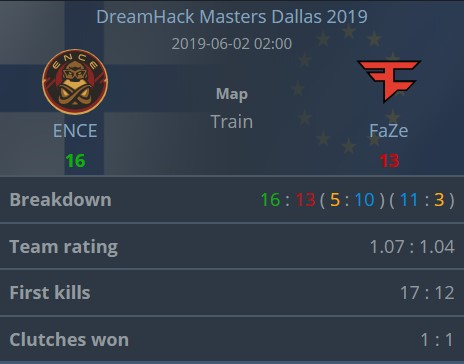 ENCE To The Finals

ENCE started of well playing T-side on the oppositions map pick Dust 2. The Finns secured the first four rounds taking a bit of hit in the fifth one, from here on out ENCE were just able to win one more round as FaZe took complete control over the half, running away to the second half with a decent advantage over ENCE.

FaZe continued their streak as they took two rounds but ENCE managed to slip in one round hoping to have crushed their momentum but FaZe hit back with two more rounds, now just one round away from reaching map point.

But it was not yet over as ENCE dug deep to pull off a spectacular comeback, taking the match into overtime. Now on a roll, FaZe found it hard to stop ENCE as they took the map away from them.

The affair on Train lasted much longer than anticipated, as it has been one of the worst maps for FaZe. But they really played it out wonderfully or at least it seemed like that until the half, cause as soon as ENCE stepped into the CT-side, it was over for FaZe.

The Finns held the sites with everything they had as FaZe slowly lost its grip around the match and gave way to another victory for ENCE.

With this, ENCE moves on to the Finals to square off against Liquid. A lot of people had been waiting for the same match-up to take place at the cs_summit 4 and will finally be entertained with one today.

Let’s see which Dane slayer comes out on top. Will it be the top NA squad, Liquid or the Finnish represents, ENCE?