26th, Aug, 2016
If you’re into competitive esports, the chance to prove yourself internationally comes second to none. Shots at international recognition have been few and the new generation of esports stars in the country have been waiting to seize the day. Be it the likes of the talented bunch of boys in Beyond Infinity who did us proud in the TI6 Open qualifiers or Counter Strike prodigies like Simar “-psy” Sethi who have ushered in a new era of skill and smart play into the scene, they all possess the passion, talent and dedication required to make it to a higher level of competitive play. But now thanks to BenQ and Zowie, 5 talented young CS:GO players from India are going to get that opportunity. 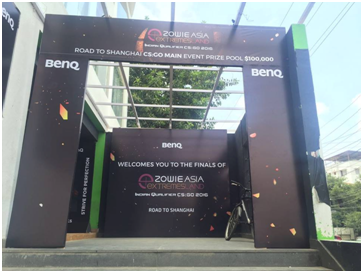 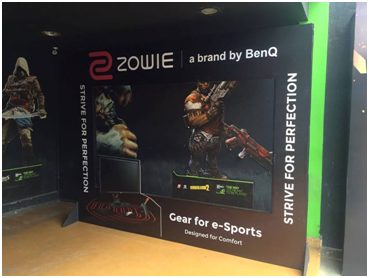 Zowie Extremesland Asia is an international CS:GO tournament organized by the Zowie brand belonging to BenQ. It features a prizepool of 100,000$ with the LAN finals being held in Shanghai. For an Indian team it is no doubt a big deal to be able to compete with the likes of top Asian teams like the Mongolz, MVP Karnal and Renegades and a very prestigious opportunity as well. Extremesland Asia will have 16 teams participating including one from India. The Indian Qualifiers were held mostly online with the top 4 teams heading to Bangalore for a final showdown.

The LAN was held at a premier gaming café called LXG at Indranagar in Bangalore and we must say that the scale and setup at the venue was very well designed and thought of. It’s one of the biggest café’s that we have ever visited and unlike many other places, it isn’t so cramped. The PC setups are spaced out and the upkeep and look of the place is very well done. The setup included two separate viewing areas with large screens on which the games were shown. LXG also has a small canteen inside run by some lovely folks and the food is super good. F&B was arranged for the media, the players and the BenQ staff as well. There was also a streaming/casting room where the casters could work from. The prize distribution ceremony was held on a mini stage and was a fun affair with a lot of light hearted moments. There was a small after party for the players and staff that followed as well. 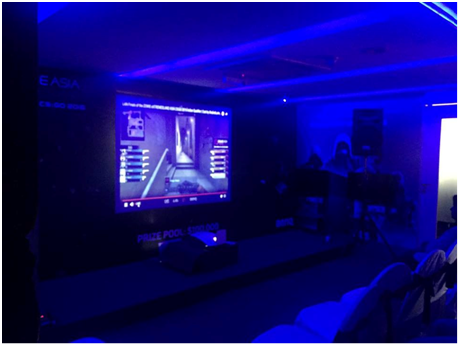 Here’s what Aravind Ananth from LXG had to say:

At LXG we believe in esports and that we have to host events like this to help build the community and help them represent India with pride. It’s time we put INDIA on the map 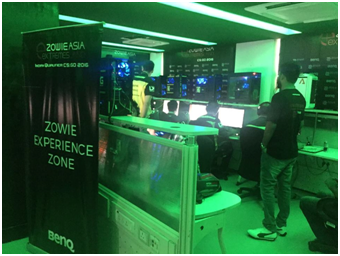 Zowie also had an experience zone where enthusiasts could come in and try out their new line of products. We did get to try out some of that fancy gear and we were more than impressed by them. The gear was also up for sale and there were quite a few excited looking faces who seemed satisfied after getting their hands on them. We got to meet the lovely folks over at BenQ and after speaking to them we’re fairly confident that they will continue to explore opportunities in the Indian eSports scene.

Ratul “Ratz” Satish casted the majority of the games, here’s what he thought: 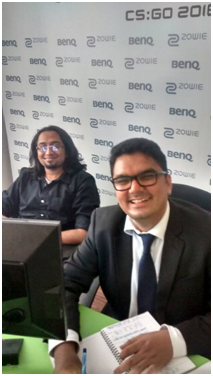 “The ZOWIE eXTREMESLAND ASIA event was awesome and it was even more AWESOME to be a part of it. Casting the games with ShaDeSLaYeR was an enjoyable experience as most of the games were very close (especially the first game between Invictus and Invisible Wings which went till 22-25). I've met most of the players in past events as a fanboy, taking their autographs and pictures but meeting them as a caster felt kind of different. I don't know how to explain but it was awesome. It could have been my inner "fanboy-ness" trying to reach out to them. I also met a lot of new people at the event and I'm hoping to meet them again at future events.”

How it played out

The teams that made it till the top 4 were Invictus, Invisible Wings, Brutality and MxB, not at all surprising considering that these are the 4 top teams in the Counter Strike scene in India currently. The format was divided into two phases, a round robin seeding phase and a double elimination bracket to follow. 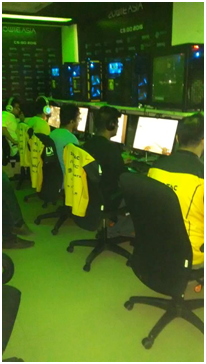 In the group stages, MxB were unable to register a single win as Invisible Wings cruised through the groups beating everyone to take top seed. Invictus’s win over Brutality ensured their 2nd place finish and a chance to start in the upper bracket. In the lower bracket Brutality and MxB went head to head in a fight to stay in the competition and the first map went to Brutality as they took down MxB 16-14 on Cbble. The second map was a complete wipe as Brutality decimated MxB 16-1 knocking them out. In the the upper bracket, IW were on the receiving end this time as Invictus got the 2-0 over them. The first map, mirage went all the way into overtime while the second map cache was won by them with a score of 16-9.

The lower bracket finals were a tense affair as we could feel the rivalry in air with both teams being quite animated and excited during the games. Brutality mounted a very clutch comeback in the first map and IW were unable to capitalize despite being on match point as the game was forced into overtime. Eventually the momentum and confidence was enough to carry them through as Brutality got the win 19-16. The second map was Brutality’s pick dust 2 and historically they have always done well on the map. But it wasn’t to be as IW played out a mind blowing T side to take the win 16-13. Brutality had no answer to IW’s mid to B movements as time and again Rix who was playing on the A site with his AWP was blocked off and couldn’t have the impact that he’d have wanted to. The third map was Cbble and IW were clear favorites now as Brutality are known to be slightly weaker on this map. astaRRRRR and co did try their level best as they fought till the bitter end but unfortunately it just wasn’t enough as Psy and Ritz just went to town on them to win the map 19-17 in overtime. 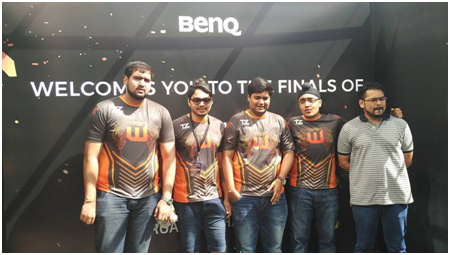 The grand finals were a nervy affair with both sides looking a bit nervous in the initial stages. On mirage, veteran player Gokul “dnm” Sagar and new blood Agneya “Marzil” Koushik were having a good time and while psy seemed to be doing all the heavy lifting on IW’s side. Eventually it wasn’t enough as Invictus won it 16-13. On Cbble, the 3 veterans from Invictus, Ace, dnm and Ribbiz all had a pretty high impact with Ace especially getting 34 frags as Invictus took the second map 16-14. IW played their hearts out but unfortunately they just did not have the firepower especially with big names like Ritz having an off series. Invictus are the winners in the Indian qualifiers and will be going to Shanghai as they look to make the country proud. The top 3 placing teams, Brutality, Invictus and IW also received Zowie mice and mousepads so no one left empty handed.
A big shoutout to the casters Ratul “Ratz” Satish and Kiran “Shadeslayer” Noobijail who kept us entertained during the games. Also a big thanks to Sudhen “Bleh” Wahengbam and Prashant “Aequitas” Prabhakar who casted the finals. We would also like to congratulate BenQ/Zowie India for pulling off this wonderful event and giving Indian teams the chance at something so big. Thank you for inviting AFK Gaming to the event, we had a blast. Let’s hope that events like these happen on a more frequent scale so that India too can be an international force to reckon with. 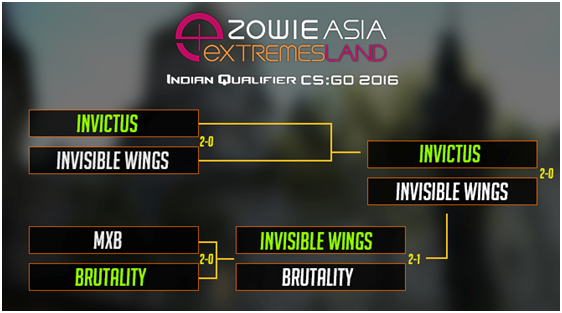 We also spoke to BenQ to get their take on their thoughts after the event as well and here’s what they had to say:

“BenQ India is ecstatic at the overwhelming response we received from the Indian eSports community at the Zowie Extremesland India finals. We are committed to building the eSports ecosystem in India and hope the community will continue supporting us in our endeavor.” 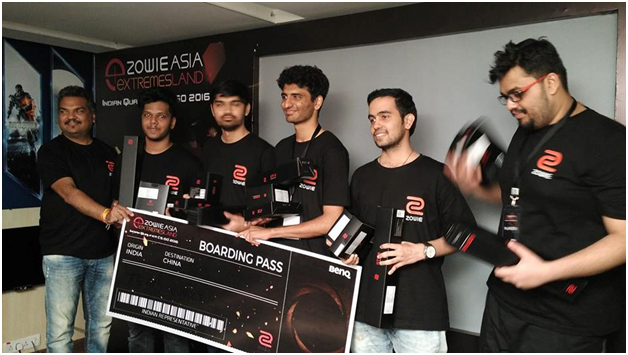