Demon hits back at Team Admiral

Jimmy “Demon” Ho, the now-retired ex-Captain of Team Admiral, has fired back at his former team for their allegations of "inconsideration and rule-breaking" in its team house and his refusal to sign the "contract offered" by its management.

The controversy was first brought to light around three days ago by DeMoN, through a six-and-a-half minute stream clip where he described the supposedly suboptimal living conditions in the Admiral team house in the Philippines.

Team Admiral responded two days ago, posting a detailed list of allegations which listed Demon’s rule-breaking and unprofessionalism, and defended themselves by saying “No management is perfect and we have admitted responsibility on our shortcomings but that doesn’t mean that we mishandled and threatened our player.”

It seems like this whole debacle is not yet over, Demon has listed and refuted many of Team Admiral’s claims and has posted a number of proofs detailing Team Admiral’s misgivings and unprofessional attitude towards him.

The incident that kicked off this whole debacle was Demon’s accusations of violence being threatened against him and the issue of player’s peripherals being used by the management.

Demon pointed out that none of his claims were refuted, but were rather “minimized” and claimed that the management tried to portray him in a bad light to “bury the fact that an owner threatened a player with physical violence over some water.”

Demon also adds that he was very passionate about Team Admiral and that he wanted to “come in, bring the experience I had gained from other teams, and help that team to become a professional, competitive squad that could make it to TI.”

Demon also accused Team Admiral’s manager ‘Peng’ of being lazy and incompetent, complaining that Peng thought his job “was just to schedule matches for us”.

He alleges that, “Peng seemed to think his job was to play PUBG.” and cites an incident where his team was in the middle of a draft, but had chosen what they wanted to eat. When Peng was asked to order food, he delegated it to one of the players who were in the draft just because he was in the middle of a PubG match.

Demon also states that Peng’s vision was not in-line with his, and that his manager didn’t do anything to help the players focus on the games.

“The managers I’ve had in NA and at other teams in SEA for the last while would have made sure we were in the best place possible to perform. My past managers would always help us out with water, ordering food, running errands (including getting laundry), and so forth so we could focus. Maybe expecting the same level of professionalism was too much for Admiral, maybe those expectations made me appear spoiled, but I didn’t think I was asking for too much, and I don’t think anyone who has played in most other regions would think so either.”

Demon then posted screenshots of the Contract that Team Admiral offered to him, explaining that the contract looked like it was “it’s very one-sided in favor of the team” and that he wanted to negotiate before signing it. 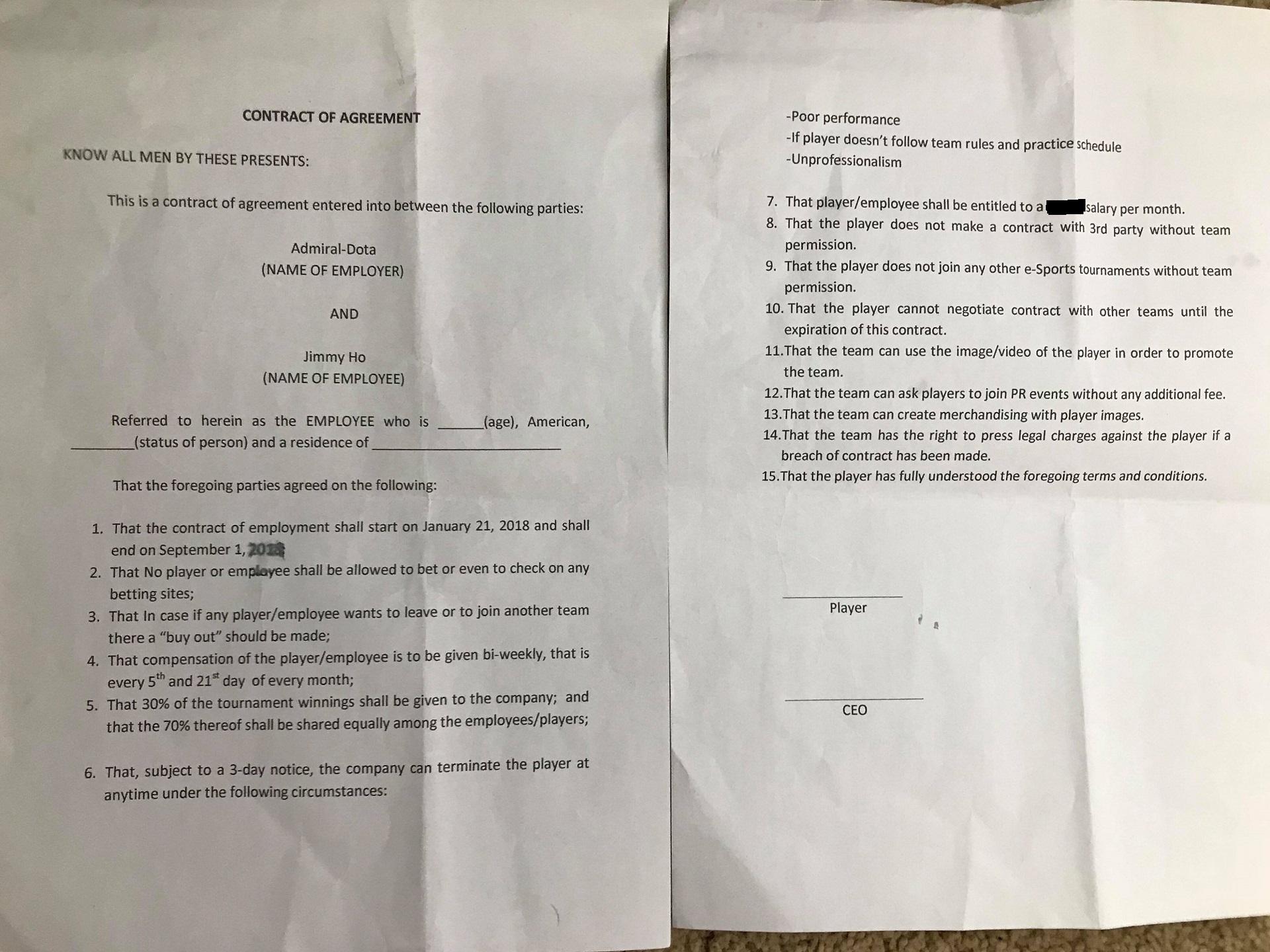 He stated that the fact that the management could sack any of the players with a three-days-notice was too one-sided, and the lack of performance-incentives could become an issue as well. He added that “No expenses or travel were covered, no mention of gear and equipment, and thirty percent was by far the largest percentage cut of winnings for an organization that I had ever seen”

He said that he didn’t sign the contract since they never made “the revisions they said they would make” and that he was still owed over $1800 as per the verbal agreement.

Demon also said that he had no intention of leaving the Team Admiral roster even though Team Admiral’s statement might have made it seem like he did, stating:

“March, a long-time friend, who was playing for Echo, reached out to see if I was interested in playing for a new org, Echo Int. I took it as a joke at first because March often jokes with me by asking me to join his teams even when those teams are full and stable. I told him I was happy and comfortable, especially because I had Gabbi (who I would constantly praise). I never once tried to sell Gabbi but only mentioned that he was one of the more mechanically gifted players in SEA, which everyone already knew. Even though Echo was paying good money, I turned March down regardless of how serious his offer was. It wasn’t about the salary or the money, but that I believed in my team making it to TI despite the adversity we were facing.”

He also accuses Peng, their manager, of invading his privacy and reading his chats when he was at the Gym.

Demon alleged that he thought the management was okay with him having a personal life, stating:

“I’m quite shocked that Admiral raised the issue of girls at the house and supposed rule-breaking. The principal reason for my shock is that management “hired” five “rule-breakers” at one point for our bootcamp because of a successful day of practice. The fact that Admiral wants to talk about my private "personal" life without raising their own role in what was happening at the team house shows exactly what kind of an organization they are. The happy ending massage was a joke about winning a certain number of games, sort of a performance incentive. Even though the management agreed with it at a point, and though we won the games, nothing came of it.”

6. Vacation and Demon’s release from the team

Demon said that he made it clear that he would be taking two vacations, one in March and one in June. He added that the TI qualifier dates had not been announced and that the June vacation was for a wedding where he’d be the best man.

“I was kicked in March, and they just used the flight for the March vacation to send me home. I initially asked that I be reimbursed for the flight since I was being kicked, but I ended up paying for it myself and since it was pre-planned already I took the loss with no arguments. Towards the end of April and beginning of May, the team and management started trying to get me back on the team, but I declined. Sometime after that, the TI Qualifiers were announced and at that point—if I had still been with the team—my June vacation would have conflicted with TI Qualifiers.”

He says that Team Admiral initially didn’t have any problems with his vacations in the first place, and that he wasn’t with the team when the conflict in dates aroused. “The fact that Admiral raises this shows just how much they’re trying to drag me through the dirt,” he said.

He ended his blog by apologising for his words on stream, stating: “When I said that the Philippines wasn’t good for me, I meant that my time with Admiral was not good for me. I’m sorry for the confusion and for the hurt I’ve caused the Filipino community. I love the Philippines and its people and the Filipino community, and my time with Admiral does nothing to change that.”

He also requested the Dota 2 community to stop harassing his ex-girlfriend and respect their privacy.

You can read Demon’s Full Statement, along with the proofs he presented HERE.