Decoding the drama – A look at Eternal Esports and their old CS:GO roster

While esports has been on an upward trajectory in the country, often there are cases and incidents which tend to leave a sour taste in everyone’s mouths. One such incident was the Eternal Esports controversy that saw their entire roster being dropped and players speaking out against unpaid salaries and alleged mismanagement. We decided to speak to both parties to get to the bottom of the incident to try and learn what really happened. While it's hard to not get sucked into the masala and the drama around such incidents, let's try and use this as a lesson on how not to handle things and as a learning experience rather than another post to share your popcorn gifs.

For the uninitiated, here’s a simple timeline to help you guys keep track of the events as they went down and also to paint a clearer picture about what happened between Eternal Esports, Entity Gaming and the Indian CS:GO players involved. 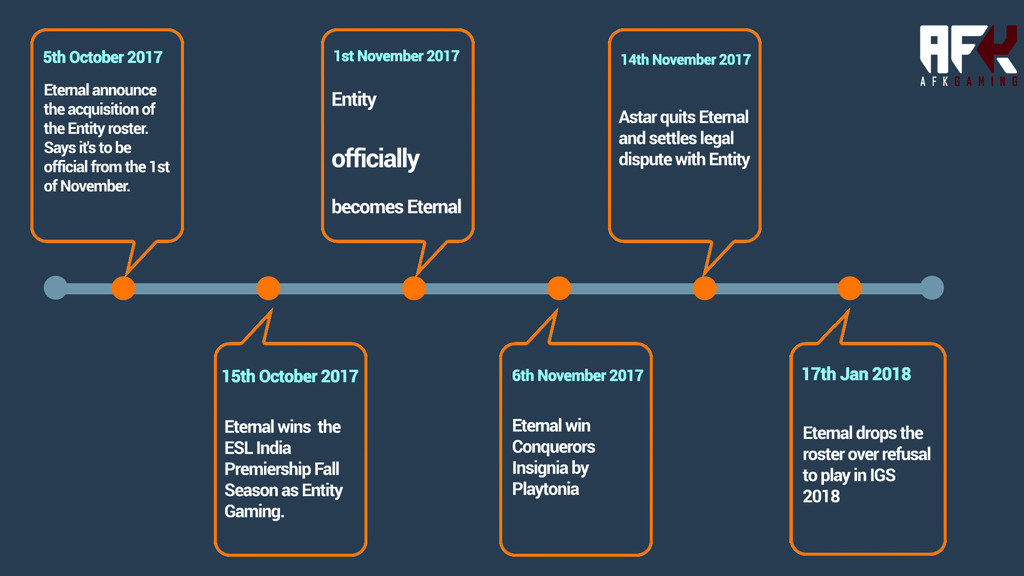 Let’s break down each of these stages and see how both parties feel about them in retrospect.

1. Acquiring the roster from Entity

Now this itself was a pretty controversial move involving the players and the two organizations. Understandably the move did not go down well with Entity Gaming who had been on a hot streak with their roster and saw no reason to part ways. According to the team owner, Gautam Mengi :

"It was during mountain dew when I had just dropped my squad, the players from entity gaming came up to me and said we'd join you if you put up a good offer, I asked why would you leave a winning organization? To that they said our owner doesn't respect us, and we've heard from your players about you, also even after losing for 6 months straight, you gave them ample amount of chances. We had a discussion, they said 2 of the players are in contract, I asked in detail to which they said they signed on a piece of paper, moving forward we decided the salary amount to be 25k, 50k each was given upon joining (which players specially asked for cash as some of them did not want to show at their home)."

According to the players, Ayush ‘Astar’ Deora was the person who was negotiating things between them and their old organization, Entity Gaming. The players agreed to hand over 40% of their winnings from Dew Arena 2017 to Entity and would receive 60% of their winnings from the ESL India Premiership Fall Season event. At this point, Entity Gaming's manager Sid Joshi posted a status to Facebook, which led to Gautam Mengi prematurely announcing the team. This, in turn, set off Entity’s owner, Neerav Rukhana, who stopped the negotiations and threatened the players with legal actions.


The salary at this time was decided upon 25,000 INR per month for each player under the Eternal Esports banner. Now the players said

"The first thing what we wanted was a contract in eternal esports because we didn’t want that what happened in Entity to happen here. But Gautam always avoided the contract topic."

When we asked whether the salaries were paid on time, Gautam himself confirmed that they hadn’t been paying :

"No since I was traveling I suggested they use the money given to them for the time being also by that time I had made sure everyone had all the equipments, they were the first team to get hands on 240hz cause I believed we have a bigger goal than that short term money which they fell for."

Overall, the players claim that the they are to be paid a sum of 75-80,000 INR per player excluding Pexxer who joined the team later and is to receive around 30,000 INR. This includes prize money from the Playtonia event and salaries. Here are Gautam Mengi’s thoughts on this:

"As the players have not signed the contract, the cash which I had given them earlier either needs to come back to me from each individual or is to be deducted by what the company owes them, so I think all in all it should be around 1 lakh for the whole squad which company owes.
Also HuntR alone was paid one month salary, he was convincing enough to get his money and be discreet about it. Also by that time they had won IIT tech fest. That one lakh prize also is with them till date."

When asked about whether the dues with Huntr at least have been settled here’s what he had to say,

"Nothing, in fact he owes the company for keeping the PC Which is technically owned by Circle Gaming for months, till date.
In fact almost everyone has kept company products either monitor or something whose cost is way more than what company actually owes them."


We aren’t sure how and why, but the Bangkok trip became the centre of attention with regards to this incident. According to the players, Gautam took them on the trip for winning their first event of 2017 as Eternal and it was a gift more than anything else. Only Excali and Ace were part of this trip. Gautam too confirmed the same going onto say:

"Bangkok has nothing to do with the player's salary, one of the players tried to act smart accessing my phone without my knowledge claims to find baseless things about me then threatens me to post online, that's a new level of low. I think they deserve it."

However, he was seen on social media with comments like this one.

Rough Translation : (The players) want to roam about in Bangkok for free then cry about not receiving salaries

At this point, I’d like to say that we do not encourage the discussion of one’s personal life or matters on a public forum and would like our readers to have a similar attitude about these things. 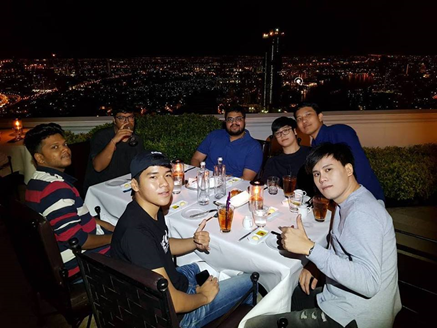 
How things played out


All in all, it is a very complicated issue with only somewhat clarity from both sides. There is no way to factor in things which were unsaid, dynamics between the owner and the players, or the conversations that took place. But it seems clear to us that there is a lack of communication between the two sides.

According to Gautam it is the players who ‘technically’ owe him money or reimbursement for the gear that they have kept yet he has also said that he isn’t concerned about them at the moment. It seems as if both parties are unclear about who owes whom what and a face to face sit down is being avoided as relationships have turned sour.

He also mentioned that 1 and a half months of salary was still owed to the team and he was going to hand them cheques at IGS 2018 but when they did not show up, it didn’t happen. This too doesn’t seem like it was the best way to handle things as the salary shouldn’t be a bargaining chip for anyone since technically it is what is owed. 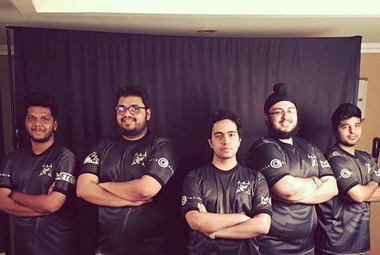 Gautam himself agrees his lack of communication with the players is the root cause for many of the problems and the players have also repeatedly said that he had stopped responding to their calls for quite a bit.

It’s imperative to understand that these are players who have grown up playing Counter Strike all their lives and may or may not be as aware of other things. It’s often easy to gain their trust and blindside them but as we quickly found out, the consequences can often be dire for both parties involved.